This page appears to describe an abandoned project, game, etc..
Comment: The Basilisk Go Server appears to be inactive since February 2012 according to

waybackmachine's last successful crawl of the website and October 2012 on

the domain that held the server appears to be for sale.

Basilisk Go Server was a web-based correspondence Go server. Its main goal was to support variant rulesets, but basilisks were also known to enjoy cool features.

http://www.basiliskgo.com. The source is on

None of these are implemented yet:

zpmorgan: I think this is a placeholder. It isn't any more meaningful for it to say 'welcome'.

zpmorgan: A neat idea. Mainly useful for joseki, I think. I hope that with variants, it's much less predictable where the opponent(s) will move.

Leira: I'd like to suggest a variant I've played only a couple of times but that turned out to be the funniest I've ever played: it's called "Go traidor" (treacherous Go). Each player takes some stones (say 10) from the opponent's bowl and mixes them into their own bowl. They play, then, without watching the stones' color. Of course, it's much more exciting to play in real-time blitz, but the expression on the players' faces when their own stones betray them is just priceless.

Phelan: Just registered. I was going to suggest João Neto's page, but it seems you've already seen it. :) I'd suggest Multi Color Go, since that always interested me. The rules for alliances should be explicit, since it's very likely that players will ally anyway. I'm very interested in this project, I've been thinking of creating a multicolor go server and client for quite some time. :P

zpmorgan: It seems to me that there's a lot of ambiguity when people suggest >2-color go. Have you tried >2-color go? Do you think that you can recommend a set of rules to start with? Do you know which is the most popular?

Phelan: I tried it in a spanish go forum(now gone), playing with normal go rules, no shared captures, and territory counting. There were no explicit rules about alliances, and the two games I saw/played in ended up in people always going for the player that was ahead. Usually the winner was the one that convinced the others not to attack him. As for a set of rules I'd suggest

JPN's Strategic Cooperation, and counting captured stones against that color's score. Perhaps it would work best if alliances could be formed and broken during the game, at a cost. I haven't seen many >2 color games, so I don't know what are the most popular rules. I'm speculating a bit about it, since I don't know how it would play. If you'd like, I can elaborate more on the rules in a subpage.

Herman: You might also look at the Kee Rules of Go, where one of the design goals was to allow 3 or more players.

zpmorgan: I've implemented this. Sensei's has a nice Three Colour Ongoing Game to use as an example.

Gresil: for something simple, how about non-square boards? That's a variant I'd like to try sometime.

zpmorgan:Of course. I'd assumed this one was obvious :)

koks: it would be more interesting if you add some features like 1-color go and/or multiplayer-go (more than 4 players, eg, 6, 8, 10 players, :D)

zpmorgan: One-color is a neat idea for real-time games. Do you think it would work on a correspondence server? Pretty soon, you'll be able to have games with any cyclic move pattern. I've just now started an anti-zen game, with 2 players and 3 colors. There are 6 moves in a cycle, but it could go much higher, I suppose.

symplicity: Is there some way to set up a quadruple-view for smaller toroidal boards? 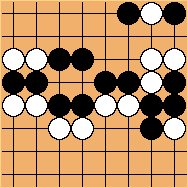 For example, with an 8x8 torus game like this, it is a little confusing to work out exactly what the position is really like, since the edges are so close to any region of action, even as you scroll around. 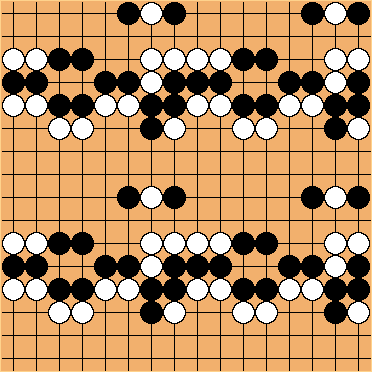 Tactically, it becomes much dramatically clearer what is going on when you put 4 of them side by side. It doesn't matter so much for large boards, but for small ones, I think a quadrupled view would help a lot. With a view like this, you don't even need to scroll the board around to quickly understand the position.

zpmorgan: I recognize that board :) I could be wrong, but I think the problem is that you haven't really adapted to toroidal yet. If you haven't tried it, it might be easier to get used to than you realize. That said, it wouldn't be too hard to implement your idea in just javascript.

[willemien} maybe better to keep the "original" board in the centre marking the corners and then adding the connections around it, think the least thing you should be able to see if a stone is captured or in atari...

I still don't understand which places are next to eachother in a Klein bottleplaying field.(and how about stones on the other side of the board)

Phelan: Practically, it is like a torus board, with the difference that the board is mirrored if you scroll one board-length vertically. At least, that´s my understanding of it. Also, there is no other side to a klein bottle, the inside and outside are the same.

willemienwas puzzeling about how to show the topologies How about the following: (PS these are just examples at the moment no garantee that they are how Basilisk Go Server boards are. The main board is centered (a1 ,, d4) and the other points are just duplicated around it.

Other unending board, I am not sure but is this a Klein bottle ?

Unending board NOT rotatable, the left right (are turned around the up down are just repeating) work differently. (is this the mobius board?)

Phelan: Klein board(as i understood it):

zpmorgan: Correct! If you twist a cylinder, it becomes a mobius strip?. If it wraps in one direction and twists in the other, it's a klein bottle. If it twists in both, it's something called a real projective plane?, and the corner nodes have just 3 liberties.