) on the left is called a 'bamboo joint'.

Black is now connected and cannot be cut apart. The bamboo joint is often a better response to a peep than a direct connection. In the diagram, after

is much better than Black a, which would create an empty triangle.

here does), but also helps Black in other parts of the board, is better.

keeps Black just as connected as a play at a but exerts more influence in the direction of b than a play at a does.

Also notice that if White pushes at c Black can block at d and White is unable to cut at e unless the ladder works in White's favor. If

were at a and White exchanged c for d then White could cut at e even if the ladder were unfavorable.

Examined in this way, it is obvious why

is much stronger than Black a when Black cannot seriously threaten White's top group.

he can block at

. There is even no longer any ladder question about White's play at b! But it's a move that can be easily turned into an empty triangle.

The shape move is the bamboo joint, and I'd recommend against Black a in the majority of cases. It's an empty triangle for one thing; and, yes, it takes away a liberty from White, but it takes one away from Black too! So as long as the fight is one that one can't count, there is no reason to play bad shape. If the black group is an outside group, surrounding a white group which is involved in a semeai with another black group, that's the only occasion where Black a might be called for.

, the bamboo joint fails to work well with

. The keima protecting the cutting point is more efficient.

If White tries to cut, 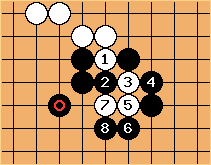 Black has a ladder.

I suggest this move. It combines two nice shapes: 'marked + 2' and 'unmarked + 2' (see shape, table shape). Moreover, Black is connected regardless of the ladder, and White has few forcing moves against this shape. White a for instance, is forcing against the keima connection proposed above; but is not forcing here. 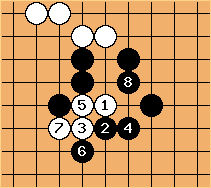 If White peeps at

, here is one normal variation. White keeps sente, but Black builds influence. Also, White has peeped at a bamboo joint. 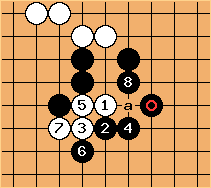 Still, the marked stone feels awkward. Wouldn't it be better at a ? In other words, I don't think that this diagram disproves my earlier assertion.

--Dieter Verhofstadt (not trying to drive anything home, just discussing to learn)

Sure, the marked stone would be better at a. But the white stones

would be better somewhere else, too.

combines two nice shapes is a clue that it is inefficient. One nice shape should suffice, unless the group is under pressure. The

stone is clearly not pulling its weight.

Even here it is not necessary. Take it away and there is still a ladder. 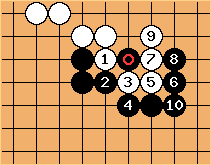 And even if the ladder does not work, it is easy to give up the marked stone.

So even the keima connection is a bit inefficient. But it at least makes use of 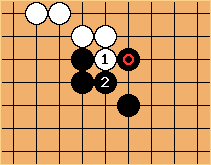 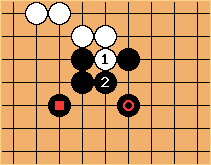 JamesA: A quick comment - I think the extra efficiency of Bill's version is demonstrated by the fact that after

, Black has the option of playing at a, for instance. If Dieter's variation is played, Black can't do this.

There's more to say. If the players are going to make it a pushing battle,

belongs as shown here. This shape gives White a peep at p. So it may be useful only in that one case. Charles Matthews