In the currently ongoing 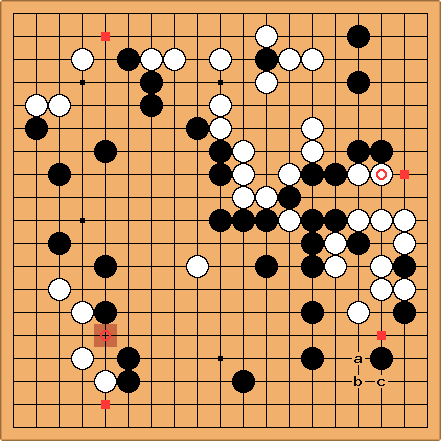 The marked spot was where I played (it links to the position on DragonGoServer); hopefully keeping sente, holding White in and reinforcing the moyo.

What is the best strategy?
Reinforce the moyo (is this a moyo?) like I think I am doing or play elsewhere?

Charles First comment: I've counted the game (roughly). Giving 90 komi Black might be slightly behind, but not by so much: White only has about 50. Therefore Black doesn't need to do so much to win: a few good early endgame plays should do it.

Secondly, Black can't attack seriously in this position. And doesn't need to, if you believe my counting.

Thirdly, Black might actually lose here, if White finds the a, Black b, White c combination.

So, not a great deal of strategy, that I can see.

The square-marked points are big endgame plays to consider at this point. I don't see that the circle-marked point is very urgent.

Pedro: Thank you Charles. Of course I believe your counting :)

We refer to that lonely stone in the middle of the Black moyo as "Bruce Lee" ('he' started being "Rambo", then "Chuck Norris", and "van Damme") -- won't 'he' be able to eat the Black moyo away? I was afraid of that so my strategy for the game was to close the white groups where they are, paying a good deal of attention to avoid them getting out into the center.

The a, b, c combination is no longer an option as the game has progressed beyond this point ... but I see the Black stones on the bottom right corner are very vulnerable -- I wish now I would have reinforced that area.

Charles The way to improve is: don't act on anything you can't read out (trust your own reading), plus develop your reading power. By the way, don't trust my counting. 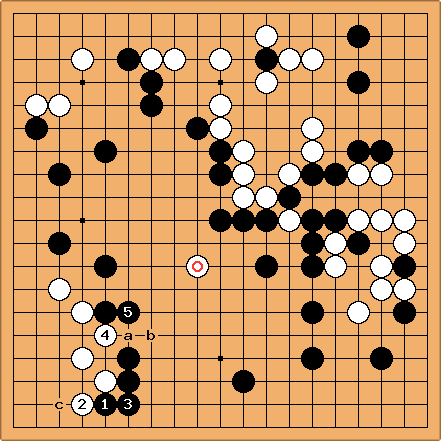 If you want to strengthen the centre, play this way.

is a very big hane-connection play in itself. It also has a tactical effect. You can see this after

, which is typical dropping back - no need to play

at a. Now White a isn't very good after Black b, because of the double atari. Also Black at c in the corner is now a serious possibility.

Worrying in the abstract about

isn't a good way of thinking.