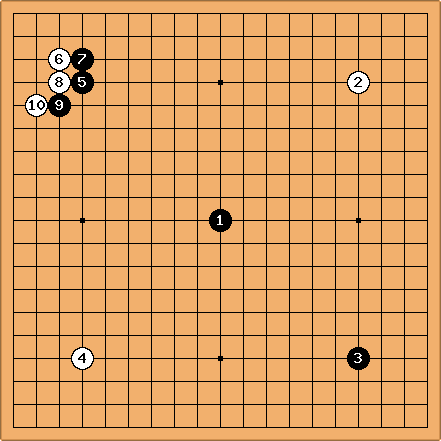 Jasonred : This is for really poor players like me. How do you take advantage when your opponent is invasion-happy and plays a 3-3 invasion too early? I had a game leading to this position.

I was lucky enough to pull off a win, but I felt that I should in fact have pulled off a massive win, seeing how much influence I had!

What was the best strategy at this point, both long term urgent points, and long term strategy, goals, and directions to build my framework? 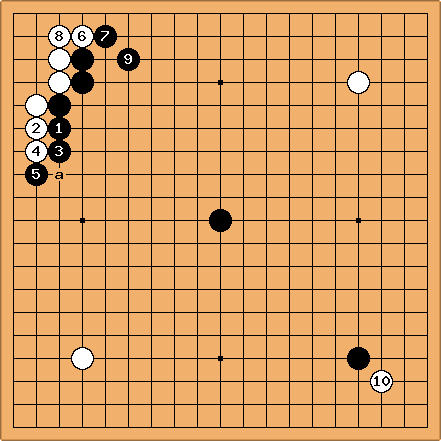 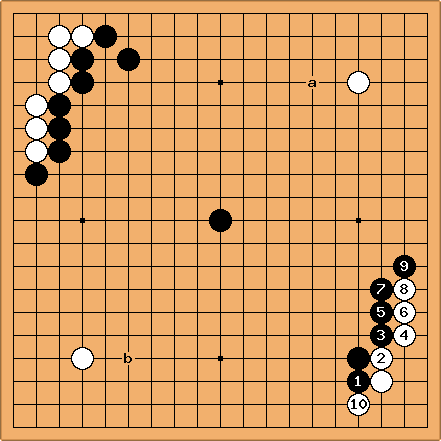 Also, did I block on the correct side on move 21 (

here), or should I have played at

1. The direction the wall is facing is the direction in which it is working. In this case this is along the top for your upper left, along the bottom for your lower right. After the joseki in the lower right has finished, I think you should aim at a or b in the third diagram, whichever is further from White's move (assuming you end in gote).

2. Black 15 is probably better at a. Getting the cutting point at a seems to cost most than the openness along the edge.

4. The general method of working with a framework: enlarge it forcing the opponent to invade. Then win by attacking the invading group.

dnerra: Be patient. Your opponent gave you an advantage, but it's not a massive advantage. I think Black's advantage is less than 20 points.

Your chances to win this game have been greatly improved. But so what? How often have you lost a game by more than 20 points? You wouldn't need to feel embarrassed if you had still lost this game.

As for the technical questions, I agree with everything Andre has said above. Aim for a big extension from your wall. Playing more solidly with

at a (and similarly

on the third line) would have made your walls even more impressive.

looks fine to me. 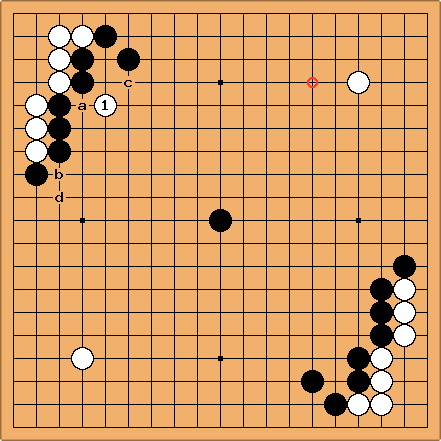 Jasonred : I did win that game, but as I said, I felt it was more luck than skill and might have gone differently. Anyhow, what happened was my opponent decided that, having taken territory and given influence, he would now attempt to take away that influence with his sente! What was the correct reply? And, upon eventually regaining sente, where am I supposed to build my framework, along the top and bottom, then stretch to the middle? I was thinking of just reinforcing the center right away. That's what I tried anyway. Perhaps it was a wasted move?

Björn: I think that blocking at 21 or 22 makes hardly any difference at all: For deciding which side to block from, you need to estimate which side is more valuable. But, ignoring the very top left corner of the board for a moment, the position is symmetrical. Therefore, the only possible advantage that one side may have over the other is how it works with the stones in the diagonal corner. Whilst these probably do matter, they are extremely far away and their importance for the lower right seems much lower than that of the tengen stone. So IMHO playing 21 at 22 instead makes little difference -- but then again, I'm only around 6k on KGS at the time of this writing, so maybe I'm just not strong enough for the whole board thinking needed here.

Concerning sente: How about omitting moves 15 and 29 and take sente yourself, as suggested above? Go is giving and taking -- so if, as suggested above by Andre Engels and dnerra, another point is bigger, then take that one yourself, and give your opponent the other, smaller ones (such as 15 and 19). By the way: I like the word "bigger" to include accounting for possible follow-ups; however, that is not the usual convention, i believe. Therefore, replace my "bigger" with "more urgent, and among equally urgent moves those that are biggest, taking sente/gote relationship into account (etc.)" to be consistent with the usual meanings...

in the above diagram: This is a mistake by white. Have a look at Play Away From Thickness, and especiall the diagram "Resist kikashi against strong groups!"

Jasonred Right. So, how to punish said mistake?

Andre Engels: There are two possibilities. The first is to go along with white's so-called kikashi and connect at a. My impression is that this exchange is favorable for Black -

will not be of much use to white, while the connection at a makes the cut at b less dangerous.

The second option is to reinforce more to the outside at c or d, ready to make the other move if White does decide to cut. If Black 15 had been played at b, I would have advised you to not react to

at all, but now the double threat of White b and White c after the cut would not make that the best option, in my opinion.

Don't get too greedy when 'punishing a mistake'. Sometimes the opponent will have given away something big, but more often a mistake just means some small advantage for you. Some more options for you, some less for him. Or something like that. In this case, your advantage is your thickness, which is worth more than white's territory, and with

it is your opportunity to further strengthening it.

does not take away your influence, it provides you with an opportunity to make it ever so slightly larger.

Regarding your question where to play after getting sente: My preference would be for the marked point (or its mirror image in the lower left). Strengthening the center is not a good option at this point. Territory and framework should be built up from the edge towards the center, not down from the center towards the edge. Starting from the center there is a definite risk that your opponent plays under it, and along the edge gets a territory comparable to yours in the centre, using fewer moves.

"Don't get too greedy when 'punishing a mistake'."

That is a very good lesson for me to learn. Thanks! - Jasonred

: It would be best to simply extend there( i.e. 'b' in the diagram above), as that is joseki. You may think you're "sealing white in" with these moves, but you're actually reducing the advantage you get from these moves by leaving some horrible aji behind. Later, either white will take advantage of the aji to make a strong group inside your framework (leaving you with the strategic problem of building the framework correctly in the first place, considering the aji), or you will need to take gote to fix the weakness. And you have two of them!!

In general, it is not good to hane onto the first line unless you are extremely strong or are attempting to kill a group, and it almost always involves more danger to yourself than to your opponent. The nobi continues the theme of your thickness, making your advantage greater.

Another quick word: Remember that this is joseki, and that white GETS SENTE. So don't be afraid to allow him sente if the position allows it, just seek to use your advantage during the rest of the game. The formation you achieve is super strong, and will result in points somewhere for you. The only real problem it will cause is the feeling of temporary helplessness as you are "forced" to let white "take" your "corner". Remember, it was never yours in the first place!!! So white isn't taking anything!! He is simply trading, and you benefit more from the exchange. Keep a level head, seek to develop your influence, and you will do well.