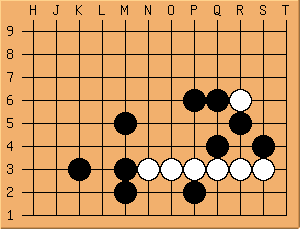 7d-6d game. Both leave it. So their judgment must be that it is settled. 1d discussion shows that it is alive. But the 7d, when prompted, said he thought it was dead. Now we think he was joking. Anyone ? 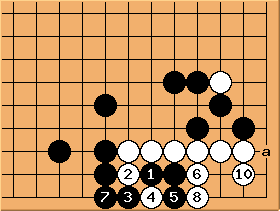 Bill: I made a diagram for you, Jurgen. Take a look at it. It's easy to do. :-) This was my first idea, but I'm not sure that Black would actually play like this. There's probably a better solution (to maybe even kill white), but I don't see it at the moment. I'll take a look at it when I get back from work ^_^

can be played at a too. With more than two outside liberties, White is alive with at least 5 points. But she leaves more ko-threats. --Dieter