Heh, to add a bit to SL, I'm putting up some examples of invasions of enclosed territory. 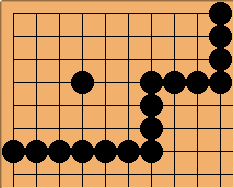 This shape may look a bit big, but it is very easy to defend! You might think that the 3 - 3 point is vulnerable, but the walls on both sides protect the corner from being taken.

Here are some examples of invasions.

Aganju: I found this page very helpful, thanks. But what if the black stone at 4,4 is not there? Basically, there is a 6x6 space to invade - can White play 4,4 (or anything else) and succeed?

Anonymous: No, even if the black 4-4 stone is not there White cannot invade and live. 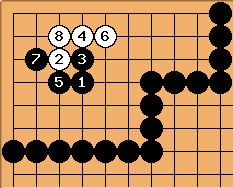 LukeNine45: I think your wall is far enough away that the tripod group will live, so I think 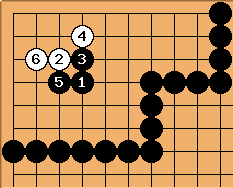 LukeNine45 (later): Hmm, seems it dies with this sequence: 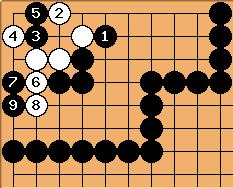 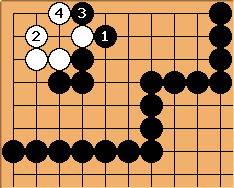 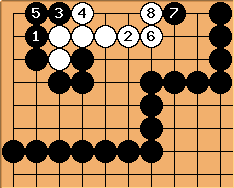 No sacrificing, No mess =D 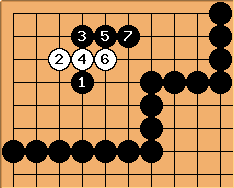 No way should this 3-3 invasion live. B need not play the usual move; with so much influence,

is in no danger.

is often a good start if the plan is to kill. B crawls on the second line, but W isn't getting any eyes this way. 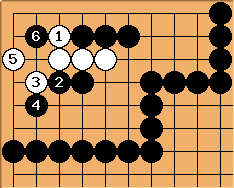 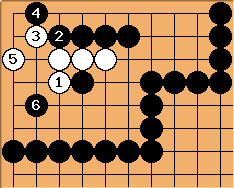 The 2nd shape comes from a question that I've asked myself over and over again, how much space can a side wall of territory have before it's vulnerable.

So far, a depth of 5 points is what seems to me to be the deepest it can go without being vulnerable at all. Although, with such a huge space, a small mistake could cost you a big bite in territory. Here is an example of a failed invasion and a successful invasion.

PetriP? No it is not. circle point for instance makes better use of the huge wall. 2 is just way too close to wall to do any real work.

above is a mistake. Black will at least cut with

to defend a in sente, and then lives with

. The mini-squeeze that white can play beginning with a does nothing useful. If White saves the other stone, then Black can capture White's two stones on the edge and make life easily.

Skylancer: Instead, white must play here to kill black. After

, Black is dead, since he has only one eye in the corner, and capturing at the circle only creates a false eye.

2 I've found is the best move for the situation.

8 Makes the invasion unsuccesful, but let's see a variation of the same foundation of moves. Even if 7 was played at 8, white could have played a hane at 7.

The 7 lets Black the breathing space to make 2 eyes. White's 8 is just an attempt to stop black from stealing any more.

Two eyes, and this huge success means the opponent's eye on the other corner. w25 points taken aay{20 points for all the new stones in ur territory, 2 points of territory, and 3 points for the prisoners}. Although, you should have learned your lesson and defend correctly this time.

See how the 7 secures the eyes no matter what? A, B, and C were all candidates for eyes =D.

Skylancer (3k): I agree with PetriP. It is doubtful that

could live after 2, since White Black can get at most one eye in the corner and none anywhere else.

at a is met with

Warfreak2: White can respond to a with c, it is useless to Black to create a wall. No reason for White to let Black get d in sente.

Actually, if I am not mistaken,

at here to begin with seems also to kill, at least with my initial glance at the variations. This might be more reasonable and give Black less leeway to start a pushing battle like

I do have a question though. This seems to be a better invasion to me, making rough miai of a and b for an extension. My question is: can White kill this invasion? And if so, is White's territory completely secure against any invasion?

Warfreak2: Attaching underneath at c creates miai of d, forcing Black to break the symmetry rather than White. As before, Black does not gain anything by making a wall. After Black deals with this, White can play a second line pincer underneath a or b, and I don't see Black even making one eye. White can probably start at d and kill too.

How about territory with stones on each side? Theoretically, even if the space encompasses the whole board, like so... it is impossible to make a living group if white uses his/her influence correctly. You should try it with a friend and see if you can make a living group inside, or if you can stop your friend from doing so. The game has an {unofficial} name, which is skybox. 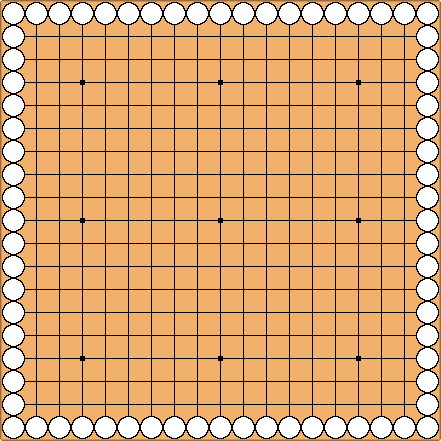