See thin vs light for a treatment of below discussion.

Is there a difference between thin and light? Or, are light stones necessarily thin also? Are thick stones also heavy? Can stones be simultaneously thick and light?

I guess I've answered part of my own questions -- stones that are thick are not heavy, because they can't be so easily attacked. Heavy stones don't have eyes, and can't make them so easily -- I guess the extreme example would be the dango or "dumpling."

As Bill eloquently points out, stones can be both heavy and thin. (Ouch! My head hurts.) And, I guess stones that are thick but not light might be overconcentrated, right?

Anyway, I invite you sensei to post examples of thin vs. light, thin vs. thick, thick vs. heavy, and light vs. heavy (and any permutations i missed :-) , and help me figure out this apparent paradox.

TakeNGive: Light play (see sabaki?) is good, because you aren't too committed to defending the stones. Your opponent can capture (some of) them without hurting you. At least, that is how strong players have explained it to me. So, that's how I thought I was playing with Black 1 in this diagram. I went on to lose by 22 points. 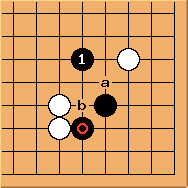 This is thin. It gives White a chance to separate this stone from the corner.

is very thin. The cut at a looks like very serious aji, especially when White b threatens 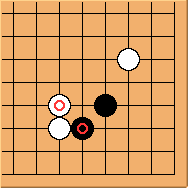 BillSpight: One problem is that Black is already heavy, probably because of the exchange of

. Black has already invested too much in the corner to throw these stones away easily.

TakeNGive: So, this shape is so bad that it's simultaneously heavy and thin. (Pretty good guess, Bill, with the order of moves slightly different.)
For the curious, this is from 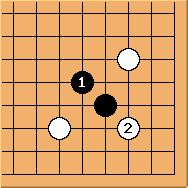 (Not that this would have been a good plan in the actual game. ;-)) Black is not particularly light, but after

he can treat his stones lightly and play somewhere else.

--DieterVerhofstadt 1k 's fallible opinion : The difference between thinness and lightness of stones, lies not so much in their composition as in their purpose.

1. Light stones usually have the purpose of reducing, living small, or forcing. Their characteristic is that they or part of them can be thrown away easily without the opponent gaining much from the capture.

2. Stones are called "thin" when they can be attacked or cut through easily, but are much too important to sacrifice, even in part. Usually they separate two groups of the opponent in a way that, if the connection of these groups succeeds, that would result in a huge gain for the opponent.

So, whether you call stones "light" or "thin" is more a decision by yours (which should be induced by the reality on the board) than a matter of shape. (*)

In the example given, your reviewer considered the stones too important to create weaknesses. Indeed, the stones separate two groups and defend the corner, so the keima may be too weak for that purpose.

I invite you to take a look at game

1588 of the GTL, where I took White, and which has been reviewed by a 4d*. At some point I decided to leave the upper right group, because I had made a light shape , and took sente to play a large point. The reviewer thought that my group was too thin and that I had to continue there. I'll post the game later on. 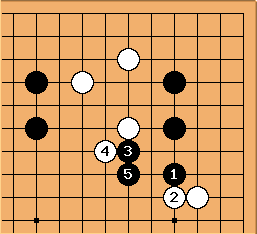 TakeNGive: Here is a portion of Dieter's game, showing the thin group in the upper right. I have to admit, it does seem thin. 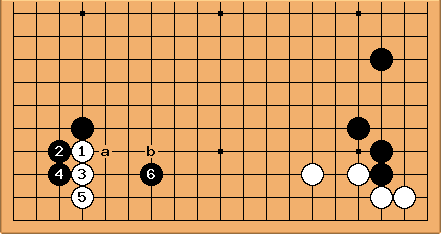 , which the reviewer (3 dan) describes thus: "this move makes a heavy group, so maybe it is the losing move." Plays at

or a are recommended instead.

My problem is that I don't see it yet as heavy -- to me, it looks like a thick iron Pillar, claiming the whole bottom side for White. (But

is obviously heavy, even to me; it would be much better at 6 or b.) Can you show me the error of my ways, folks?
TakeNGive (11k)

BillSpight: Look at the local shape after

. The proverb says to play Hane at the Head of Two Stones stones, and White has invited Black to make that good shape. More telling, perhaps, is the fact that White 1 makes an inflexible position. The two white stones stand or fall together. And again, White pretty well is committed to saving them.

It is true that the corner is not Black's sphere of influence, but Black does have the play, and thus the initiative. Ideas of claiming the bottom are unrealistic.

But it looks like the problem started on the previous move. White apparently attached to one of the Black stones. That is typically an emergency measure used when Black is already strong. Approaching with a keima or one-space kakari puts more pressure on Black, because it does not strengthen him so much.

TakeNGive: Thanks for the lucid explanation, Bill. You're right, the reviewer didn't care for

(I have edited Diagram 5 a little for clarity).