ThorAvaTahr: The diagrams shows a very popular, modern fuseki. The idea about the tsuke underneath the shimari is to prevent white from being closed in. Although black's shimari becomes solid territory, white's group is more secure.

Andy: Can someone please supply winning percentages with this fuseki when played by the pros? I see this quite frequently on KGS but offhand it doesn't seem that great for white. Black has two unassailable good-size corners and white's thickness is encroached on both sides by black and it is black's turn. In a related question, where does black usually play next after this formation is completed?

ThorAvaTahr: Interestingly many amateurs share your feeling. However, remember that white has komi. It is relevant, because typically black's plan is to use his starting advantage to make a large framework, in which he generates synergy from his starting stone. That plan is counteracted by white after this fuseki. Also note that black pushes from behind on the second line three times!!!

To answer your question, in a quick database search I found 56 games where the pattern at the left side was played 32 of these where won by white. The games inluded a wide variety of players, no player showed up more than two times in the list.

In this particular fuseki (with the white stones on the right placed as they show in the diagram) black usually plays 'a'. In the database search in 10 out of 13 games black played 'a', resulting in 5 wins. 'b' (2 games) and 'c' (1 game) show up as well but black lost all of these games.

Andy: If Black pushes from behind three times, does that mean Black is unimpressed with White's thickness?

does a little to mitigate White's thickness, but the main purpose behind

is to deny White a sente block there, which is big. 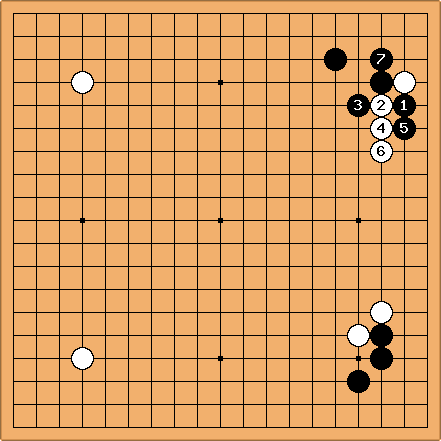 ThorAvaTahr: Instead of diagram 2 my opponent played as in this diagram. In my limited professional database (only 45k out of 60k games) I found 90 hits on the fuseki, but noone played

as in this diagram. Therefore, I expect that this line is inferior. My question is, how can white profit from

? Any ideas or comments? 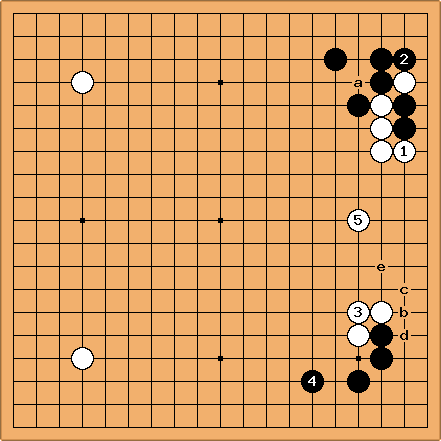 ThorAvaTahr: One idea is to play as in this diagram.

kb: See the analysis below why White at a before

is better. However, this is still playable, but with

kb: I got the opportunity to study this exact fuseki in China in 2008. 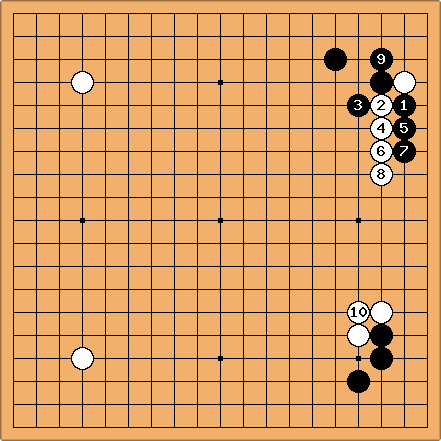 kb: The reason why Black makes the

exchange is to make a White block on the right gote; otherwise

would be bad because it is pushing from behind and on the second line. (Normally, a second push on the second line is to avoid the block becoming sente, but because there is already a cutting stone a third push is needed). 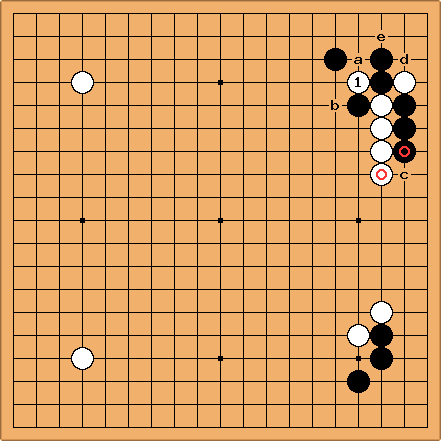 is normally a probe in this position (with the

exchange); Black responds with a-c or tenuki (which is probably not good in the opening). 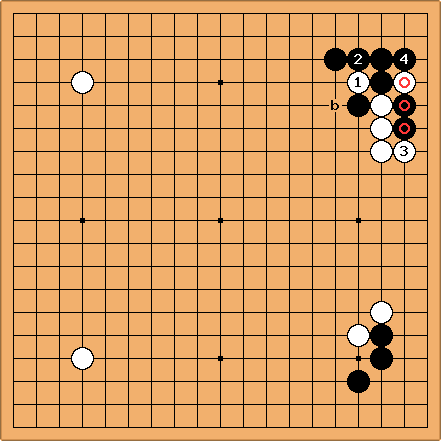 kb: However, in this case,

must be answered locally by a; otherwise White can capture the

stones. Therefore you could play

here; Black has been pushed around. (If you play

can be answered at b.)

ThorAvaTahr: Thank you for your excellent description of the theory behind the fuseki. I agree completely. And as I mentioned earlier, I would like to exchange

before blocking. After that I have a satisfactory result. However, my fear is that black will answer

. After which it becomes difficult to get a good result. Therefore I am afraid I am forced to block immediately and give up the 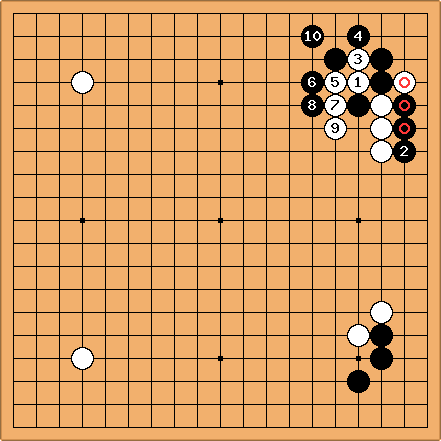 kb: First of all, I wouldn't call it a bad result. Actually, it is good for White! 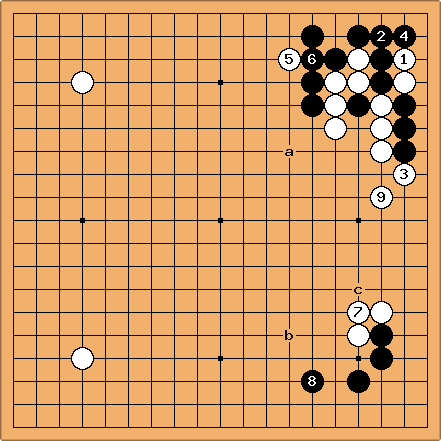 kb: This looks like a little better for White. White got

in sente, has a more secure group than the joseki and has good follow-up moves, e.g. a and b. Remember, Black got three moves on the right first!

ThorAvaTahr: Hmm, looks interesting indeed. I'll have to think about it. Perhaps 'c' would be more appropriate than 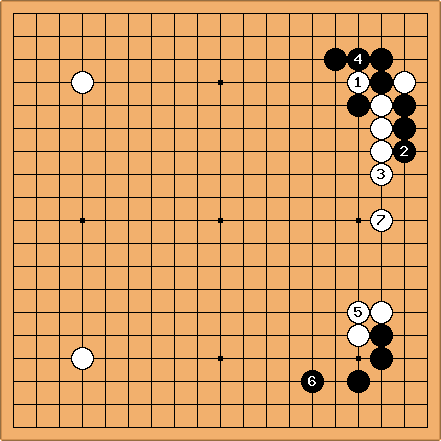 kb: Nevertheless, if you don't like it, you can just respond like this, which transposes back to joseki:

ThorAvaTahr: No, I do not want to revert, I think black made a mistake and I am greedy ;) 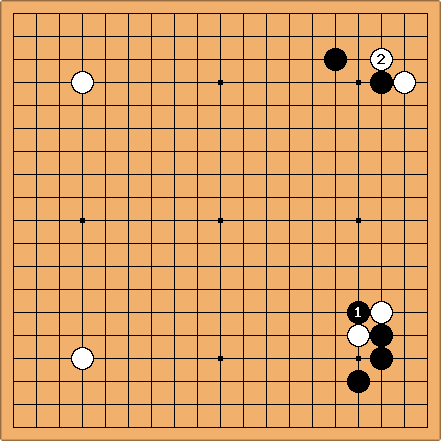 kb: By the way, I have had one opponent ignore the probe and cut at the lower right. My teacher advised me to ignore him too ;) 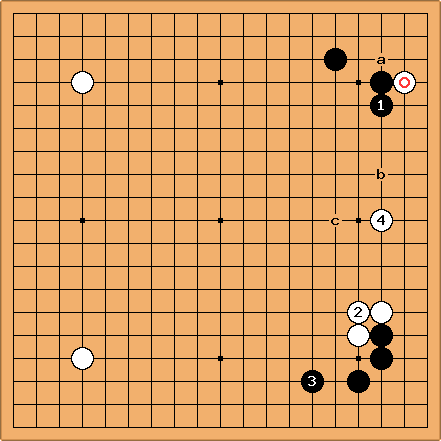 Dieter: And I guess that answering on the outside with

, allowing White to return to the classical joseki, leaving a behind, is too passive for Black?

kb: Absolutely. Black trading b for c isn't good, because White still has a, therefore later White can play one point above b and Black is stuck.

In another light, tewari tells us that if

is played first, then Black will never answer

because the outside is no longer important.