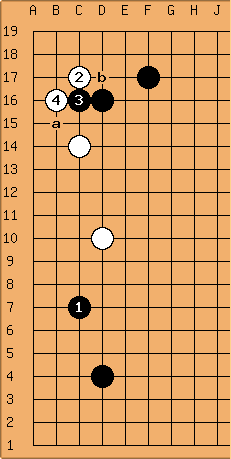 Abydos1: I had this played against me in a 2 stone handicap game where I was black. After

there's the decision of which side to block. I played b leading to the next position:

Black blocks on the top 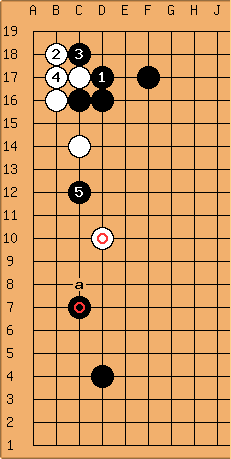 Abydos1: This seemed better to me at the time since I though white would have a hard time dealing with

here even though black is somewhat overconcentrated on the top; after searching similar positions on Eidogo I found that most pros appeared to block at a in diagram 1, leading to a result similar to diagram 3 (in most cases there where a lot of other stones around though and black didn't usually have

xela: Black is very overconcentrated at the top.

Abydos1: I already admitted black is overconcentrated here but

seems severe to me and I'd like to see some opinions on how white can best continue here. As I said below

seemed severe enough to counteract the overconcentration black suffers at the top.

Andy: I think you are incorrect in your assessment that

is severe. White is alive in the corner and

is light, so what are you going to attack? White will either ignore

or press on the bottom corner and eventually eat

it seems black can seal the corner and/or take a high position on the top and be very comfortable on this side (granted, black played in both corners here first so we'd have to look at the whole board). Also, the point of

over a is that white has a harder time leaning on the bottom (or counterattacking).

Andy: Where does this "and/or" concept come from? The "and" part is impossible, since white isn't going to pass her turn. Since it's white's sente, white even gets to pick which of these two "or" options she wants, or if both are too small, she can play a bigger move elsewhere and still get a nice move here (whichever one black doesn't pick). 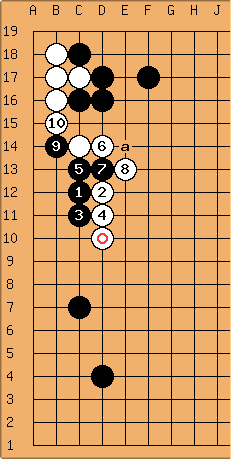 For reference here is the continuation that was played:

tapir: Even this is not sooo bad for white, imo.

Abydos1: b and d seem like miai here but both look very large for black.

Black blocks on the left 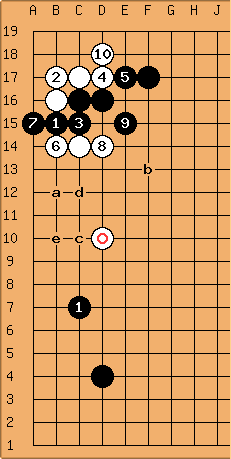 Abydos1: This to me seems better for white, black's stones seem very inefficient here; any of the thickness gained from the 3-3 invasion is offset by white's strong position on the side. I'm wanted to get some higher level opinions on the situation here, mainly concerning black's position in diagram 3 and how white should respond to

tapir: Black can close the upper side in sente (threatening the life of the corner). And presumably the white group is less strong and smaller than it looks. Later black can jump in at the 2nd line threatening to connect to

to destroy the eyeshape of it.

xela: This is a great result for black. The white group on the side still isn't settled: there's an invasion point at a.

eidogo this is somewhat joseki but without

("White may play this way when Black has a pincer at c. Otherwise, White would not prefer to crawl into such a small space.") and finishing with the black b-

exchange. I can see that white doesn't have much territory here but the black stones still look very inefficient to me only serving to split white into two groups which are both practically alive now.

from diagram 1 also has a large effect on both results and if it wasn't in place I would've probably preferred to block this way; I was more specifically curious about the play while taking into account the bottom left corner.

tapir: Btw, I felt the same when seeing this and similar positions the first time. In the bottom left black played an approach to the white hoshi stone already further reducing white's strength. The main lesson I try to learn from that is not what is considered equal by professionals, but that you have to use weaknesses in your opponents position mercilessly. If white is allowed to make territory on the left edge without compensation than the whole exchange surely is to her favour.

ThorAvaTahr: I don't have a good feeling with a, I feel that d remains the vital point. However in any case, white's group is heavy and urgently needs reinforcement. A move at e takes away the base of the group.

Abydos1: b would be bigger here taking a high position on the top (assuming a good situation in the upper right) and forcing white to live overconcentrated on the side (or perhaps jump out to prevent black from sealing the group in. a would be premature, white can be happy with the influence gained for very little black territory on the side; same result with e (e looks weak to me with the two ogeimas on the bottom). 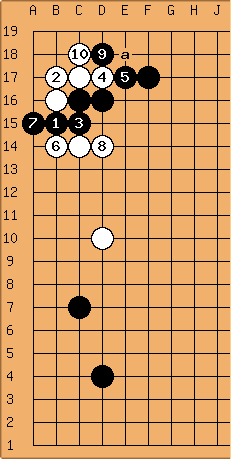 Iago how about this then ? Black needs the ladder, but can white live after B a ? I think not...

ThorAvaTahr: Good point, seems white is overplaying unless he has some tactic to cut.

Abydos1: It could probably be assumed that white has the ladder since black has these two corners (in the actual game white had the ladder). 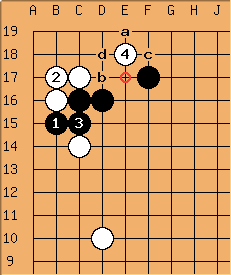 Should White respond with

in place of extending? Black might play either b or c and white lives after d; the outside liberty at

is vital to White's living lest the hane at a catch the two white stones in a shortage of liberties it seems. 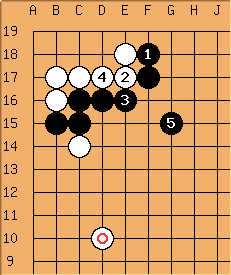 Is this desirable for White? The corner is only slightly larger and Black has been strengthened considerably on the outside.

Abydos1: See the joseki page for more on this position (without

, losing a liberty and having to come back to

. Black ends up with

in place defending the cutting point. Why encourage Black to fix this weakness?

Abydos1: Well it does point out that it isn't always best to jump into the 3-3 point early in the game but it can be beneficial if white is strong in the surrounding area. White has the option to cut before going back to live at

Bob McGuigan: Here is an idea going back to the beginning. I think

in the first diagram above was a suboptimal move. If

had been played one space higher as here: 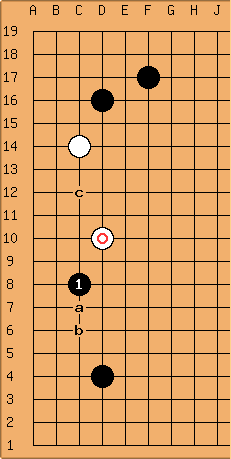 puts more pressure on the two white stones and would make many of the upper corner continuations shown above more effective.

Abydos1: Either white stone could be treated lightly so the extra pressure might not be the best idea. a has more effect on the corner and gives white less options for continuing in that direction from

Tapir: It is important that your moves have a follow up. After a tournament I've seen Hwang In-seong commenting games, for all of us incl. the tournament winner he invariably said... look for moves with follow up, quite often we played a-type moves looking more secure whatever, while he proposed

-type moves. It is not about pressure in the sense of proximity making pressure, but what it means for a later invasion at c, or allowing to destroy whites base through a simple slide..

Iago I agree with Bob McGuigan this is the key point. a is not a good move.

With 1, white is in real trouble after invading the upper corner. If black is interested in the bottom corner, a keima (below a) would be better imo.

This distinction between moves with a continuation and vague moves is probably the best lesson from this BQM.

Abydos1: Yes, a here is a weak compromise between applying pressure to white and securing the corner since it does neither particularly well. A quick search on

, a, and b played once while

played 80 times; a, 34 times; and b, 9 times. I'd be interested to see results from a search of a larger pro-game database.