I had the following corner situation 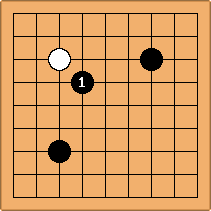 It is clear to me that

is the only move to start here but what is the best continuations so that the other Black stones get developed?.

I used the Joseki library in SmartGo but this position is not in the collection. also Kogo's Joseki Dictionary doesn't mention it.

but using a standard 3.3 joseki seems such a waist of the Black stones.

fractic: This formation usually appears with a different move order. 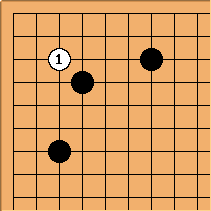 fractic: White can live with

under the black enclosure. See butterfly. Although on a 9x9 board the situation could be different. 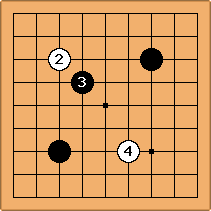 fractic: If this was the start of the game then

certainly isn't the only move. In fact I think it's rather bad since white is alive even after tenuki. White can play in the lower right corner with something like

and form two groups. If white also has a significant komi -like 6.5- then I would say she has already won.

Also joseki mean absolutely nothing on a 9x9 board. They provide even results on a 19x19 board but the results are very different on a smaller board. 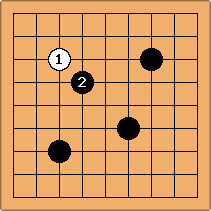 Willemien The situation occurred in a 9x9 three stone handicap game but because I was looking only for a Joseki in the upper left corner I made a 19x19 game of it.

the full situation is to the left. I had a free placement of handicap stones and I think that in the lower right on the 4-4 point gives a better position than the 3-3 point (Unfortunately my opponent 1+dan lived in that corner as well, so maybe it isn't that good)

Bob McGuigan: I also have my doubts about

as in the next diagram is better: 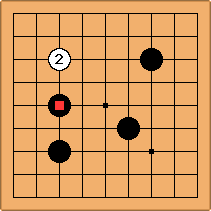 is sente against the white corner stone and gives a better development for Black than playing the shoulder hit. After White responds to

Black can solidify the lower right corner, say on the 3-3 point, and be doing very well.

Willemien guess you are right. also another correction found a pro-game in SmartGo where the shoulder hit at the 4-4 point is played, just didn't use the program the right way.