There are a variety positions in which the underneath contact play is useful. Among them is using this play to prevent White from obtaining extra benefit from the unusual knight's move below:

(Note: I can find no record of any professional ever playing 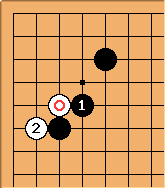 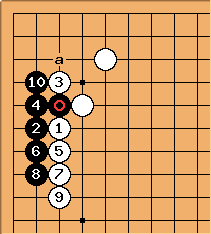 , a possible White response, is the hane of

putting the most pressure on Black. Following the sequence to

, Black is alive. This raises the questions:

Herman: The end result, after

at a, is a horrible disaster for black. There is no way this result is ever acceptable in a game where the space on the left is this open (ie, with no stones from the shimari until the left hoshi). As such, I think that any attempt by white to get an even better result by trying to kill black is an overplay. White gets an extremely good result this way, trying for more can only lead to disaster. Black however, can perhaps improve upon this result by either cutting immediately with

, or by playing hane on the other side first. Black will certainly get a better result by playing

one line lower at

The unusual shimari above straddles the left hoshi. Should the above read upper right hoshi ?

Herman Sorry, I meant the left side hoshi, near the lower edge of the diagram. 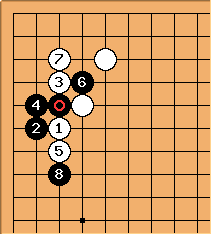 in the theme diagram is very submissive, by the way. Black should explore options like this combination of 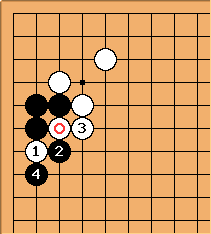 The immediate hane of

and captures one of the two White stones

White extends once, then hanes 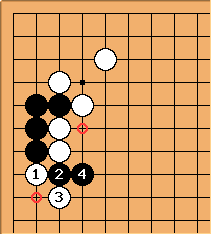 Should White extend once then hane. Black crosscuts. Several variations result based upon Whites response. 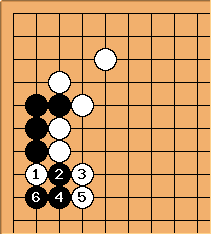 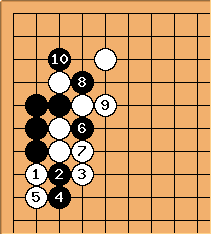 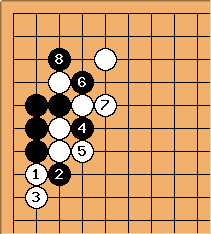 Bob McGuigan: Isn't the unusual white "shimari" usually played for outside influence? The variation in the theme diagram gives White just what she wants while Black crawls on the second line and ends in gote. Timing of the attachment seems to be important. Furthermore there are other ways for Black to limit White's corner territory, including a direct invasion at several points, though any invasion will give White outside influence and likely end in gote for Black. In the theme diagram variation reproduced below White can play at

in sente, too, adding thickness.

hhw: I suppose the point is that thickness would not be too helpful for White. Since Black was willing to attach

on the second line.

Velobici: Agreed, the unusual white "shimari" is played for outside influence. If there is a strong Black position in the facing corner, White's choice is rather queer. Black needs to know how to handle the attachment in the theme diagram on this page, as well as, how to handle the other ways for Black to limit White's corner territory, including a direct invasion at several points. Each of these would be a valuable page. Creating a page on the unusual white "shimari" that references each of these pages (this attachment and the direct invasions) would be even better. Would you be interested in working on one of those pages ?

Tapir: See 3554Enclosure (I'm interested btw but pretty incompetent). In the line given i wonder whether "I suppose the point is that thickness would not be too helpful for White." can be true under any circumstances. 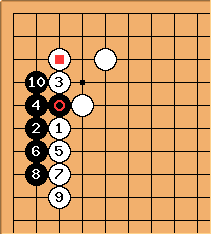