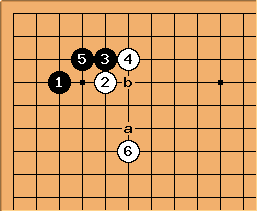 Tapir: This seems to be joseki. I admit I don't understand

very well. This move is fast paced and seems to be quite flexible - <s>despite</s> due to the always possible cut at b. In amateur games (at least at my level) however, I more often see

at a (together with a ladder towards the lower right to make the cut impossible)... How and when is

, so its a known way of play. Lee Sedol played it against Lee Changho on 3 June 2006 as part of the 19th Fujitsu Cup and won by 4.5 points. Others that have played it include: Yamashita Keigo, Chang Hao, and Nie Weiping.

Tapir: In my personal (not very large) database there are much more

than White at a. Is this Joseki? How to follow-up? 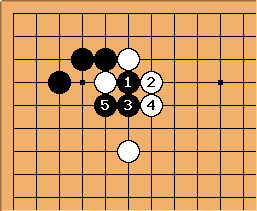 Dieter: As a first comment, your statement " ... seems to be quite flexible - despite the always possible cut ..." points at a misunderstanding of flexibility. The possibility of a cut is precisely what characterizes flexibility: it is on the contrary the certainty of connection which reduces flexibility, because all the connected stones must be saved together, or given up together. A group in such state is called heavy.

here, or a, has a special, or whole board purpose, for extending at the side is normal or conventional. Either White cannot extend at the side (there is a black stone there), or he doesn't want to (he likes a central stone better, in its relationship with the rest of the board - think (superficially) Takemiya). 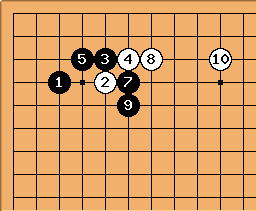 In a way, this is also "joseki". White willingly sacrifices

for a modest presence at the top and the extra stone played elsewhere. The local result is unbalanced, but viewed in the light of the whole board position, it can fit the player's strategy, style or mood of the day. It's the same with the move under discussion.

Tapir: I agree. But what I don't know exactly how to play flexible (like those amateur players preferring a in the first diagram). Even Takemiya et al. don't play one line further away afaik. My question is, what is the relation between the stones here? Which play is light? Which is thin only? 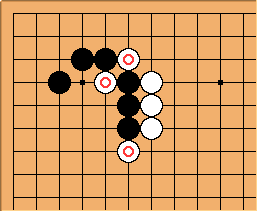 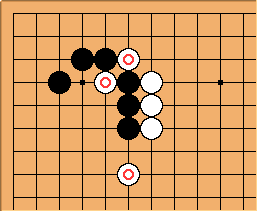