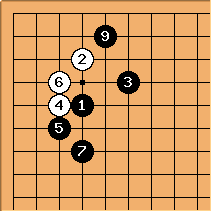 Everyone knows White must answer

after a tenuki, but what if she doesn't? Can Black kill the corner unconditionally, or the best he can do is ko? Please note that

is a diagonal connection, not a solid one. Thanks for the answer. 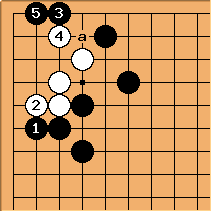 BobWhoosta:I believe the following sequence kills white. The question is if white responds to

at a, what's the followup?? I'll explore that line in the next diagram. 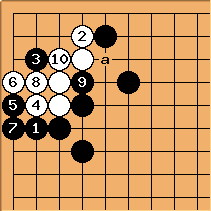 BobWhoosta: This line looks really close to killing, I'll check on the followup in a second.... It seems white might be able to break into the center on the second line, so after the eyespace is messed with it might behoove black to play a move at a and let white live small in the corner in gote while taking amazing thickness for himself. 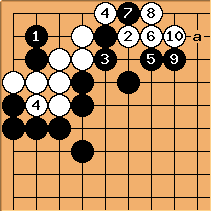 BobWhoosta: Here black plays at a next and white can't break out or get an eye on the side, although I don't know if there's a tesuji that lives on the inside. Right now it totally looks like white is dead.

It is very possible that the kill sequence I mentioned above is flawed in some way. In most cases in a game I would simply play on the outside and force white to live small in gote, as in the following diagram (this is UNLESS I have read it out/studied the situation before, which might be the case if I did in fact play the 5-4 regularly).

I'll show one more diagram to illustrate how thick black can get. 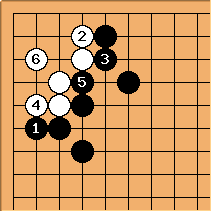 BobWhoosta: Here after 5 white MUST live with 6 or face immediate DOOM. In any case, the local result is SO good for black the even in fuseki I might allow two tenukis. After all, two stones elsewhere might make a framework, but with this thickness no framework stands a chance against my GLOBAL AWESOMENESS!!! 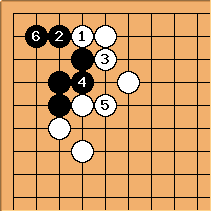 Tapir: There is one occurrence in professional play. Black was alive, but White won the game. The problem with going for the kill is that there is lot of bad aji to take care for. 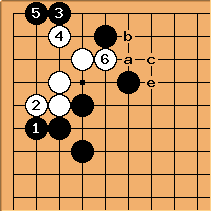 Just take the sequence you proposed, if White resists now with

, Black can't play at a but playing at b doesn't really work as well.

BobWhoosta: I noticed the aji as well. I figured that if

, Black b, then white a and black c, white will play at e to cut and black will connect on the top. Then we have the following diagram: 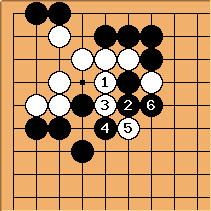 BobWhoosta: And as far as I can see, white can't escape and black seems to be okay on the outside. Am I missing something here? I agree that it's scary, and depending on outside influence this may be disastrous, but it seems playable on a fuseki-type board. Of course there is ladder aji, as well as the fact that white could cut on the top instead, but I don't see a fundamental difference in the position if he does, except that the black stones on the top will live more easily. I could be missing some side of the board tactics there though, I tend to mess up in that area quite often. 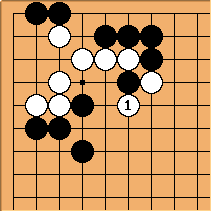 W can also live cutting by cutting above.