One approach to teaching is to lie and then, later, when the student is more experienced, explain more of the truth. Is this what the stronger player is doing here? When is it okay? To what extent should the weaker player be skeptical, perhaps thinking:

What about situations where stronger players give conflicting advice, both in such absolute terms that the weaker player can't reconcile them?

What, if anything, does this mean for content on SL? Much of it seems to be generated by a motivation to help beginners. Does it? Pages on "advanced" topics seem to include contributions by players of a wide range in strengths. Is this the intent?

Alex Weldon: There seem to be two distinct groups... those strong players who say things in absolute terms or try to make themselves sound like they have more authority than they actually do, and those that understate things to the point of absurdity. You'll hear things like "there isn't much potential for Black in this position" when really they mean "Black is completely screwed."

Once, while playing out some variations in a particularly complicated situation that came up in a teaching game on KGS, I confessed, "Really, I don't know either. I'm just making s--t up." The student LOLed and said he appreciated the honesty.

My opinion is that, since part of the culture surrounding Go seems to be respect for the stronger player, it's that player's prerogative to say things with whatever degree of confidence and assertiveness he feels appropriate. So, although I usually qualify my statements as above when speaking to a weaker player, if a move is clearly terrible, I'll say so in no uncertain terms. What's not okay is if the stronger player isn't quite strong enough to know what the right move is, but is afraid to admit it, and so asserts something that is likely incorrect, in the hopes that no one will challenge him.

The student, however, bears a certain amount of responsibility too. He must not be intimidated by a teacher with a know-it-all attitude. If he thinks the teacher is wrong, or doesn't understand the reasoning behind the teacher's assertions, he must ask a question. Notice the word "question," though. Many stronger players, myself included, resent it if a weaker player asserts something contradictory to what the teacher is saying. I was playing a game with another 1 dan at the club, and a 5 kyu was kibitzing. I played a move that killed a group of the opponent's, so the opponent tenukied. The 5 kyu said "Why did you tenuki? You can live." I said, "No he can't, it's dead." He said, "No, it can live. You're not seeing it." My opponent said, "I think it's dead. I don't see a way to live." 5 kyu said, "It can live." and walked off. After the game, I played through all the variations with my opponent and we concluded that we were right and it was, in fact, a dead parrot. The 5 kyu wasn't interested in watching us analyze, though.

That's an extreme example, especially bad because it was during a real game, not when reviewing something, or during a teaching game. Still, the general fact remains that if a player would destroy you in an even game, you shouldn't be too aggressive in challenging their authority in a discussion.

In conclusion, when discussing Go, my opinion is:

HelcioAlexandre: This is an example of the kind of conversation I hate when I explain things to a weaker player:

Sometimes this happens so much that I just understand why a pro says "This is the only move." and nothing more. One of the keys to understand what pro says is to blindly believe them and play the move yourself and see how good it is. The player that I had the conversation above only improve when he try the move himself and later come to me and say:

Unfortunately, after a few days he unlearns the lesson and starts to make the same mistakes over and over. But he is improving nevertheless, so there's a hope for him. Also, another point... he never takes handicap stones against me although he always loses.

Alex Weldon: Hmm... I don't like this. How can you advise someone to just "learn a move" that a pro or stronger player suggests, and then play that move? Except in the case of joseki, and basic instinct and common tricks like snapback, how can you "learn a move" outside of the whole-board context (which will obviously be different in every game)? For example, I played a game the other day with a really weak player, like 28k or something. We were playing 13x13. I (Black in this diagram, though the colours were reversed in the actual game) had something that looked like this, although I can't remember the exact situation. 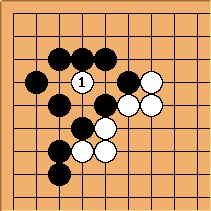 I had just captured four White stones, and he played

, which, to most of us, is clearly absurd. I said, "Let me guess, someone told you to play that move when you see this shape?" and indicated the farmer's hat eyespace. He said yes. I asked him if he knew why, and he said they had told him something about it being the vital point. I told him that it was, but only if that was the only eyespace for the group. After pointing out that I had plenty more eyespace along the edge, and that there was no way he was going to kill, he understood why that move is good in some situations, but not here. This ridiculous mistake was the result of someone "teaching him a move" and him just accepting it blindly.

On the other hand, I understand why you don't want to play out several 50 move variations to show someone why a move with long-reaching implications is a good one. I would say, however, that if the player can't understand the implications of the move without having to play out such lengthy variations, they're not of sufficient strength to be learning much from that move anyway.

Fhayashi: The other extreme is also not helpful for the learning player - the dan-level player who does not offer much advice to novice players because they appreciate too much the subtleties of go... Like many things, somewhere in between the extremes is optimal.

dnerra If your teacher is sufficiently stronger than you (say, a 1d teaching a 8k), I sincerely believe that it is best to almost blindly believe him. (That doesn't mean that you should not try to understand his advice better when, for example, you got the opposite advice in a situation that looked similar.) Of course he will not always be right, but still your improvement will be the fastest possible if you are more ready to throw away your own prejudices and try to adjust them to you teacher's. Don't forget that the advice that is most contrary to your own opinion is the most valuable, as it might point out a serious misconception in your judgement.

I have even seen a 2d disagreeing with the advice he got from 6/7ds, and even from a pro. The teacher than has 2 ways to react. He can try to convince him. But the professional way to react is to just give up on this student and avoid the discussion with him on the future.

Alex Weldon: This is what I meant by phrasing your thoughts in the form of a question. If this player said "Why is your move better than this one?" instead of "I think this move is better than yours," the teacher would be much more inclined to answer helpfully, instead of ignoring him.

As an aside, I'd claim I can guess a go player's potential for improvement pretty well just from his interest in, attitude towards and understanding of a post-game analysis.

Bill: Being a good teacher is not necessary for becoming a pro or strong amateur. One of the best go teachers I know is a 4 kyu. Not all of go skill can be taught, anyway. If a stronger player makes some pronouncement without an adequate explanation, or with none at all, there may be a number of reasons, including not being a good teacher or simply not being able to articulate the reasons for a valid statement.

I think that it can be valuable to try to understand why he said what he did. There are many ways to do this. One way that I have found useful is to try things out. This is like what dnerra says about taking things on faith, but with a bit of skepticism. After all, what he said may be wrong, or what I think he said may be wrong. You can't be too quick to draw conclusions when you do this. For instance, if you do not know how to use thickness and you start playing thickly, it may take quite a while before you learn enough to see positive results.

BobMcGuigan: There's another aspect of this that hasn't been mentioned yet. The best way to learn something is to figure it out for yourself. Doubtless there are "teachers" who can't explain why a move they recommend is correct or who can't give an explanation suitable for the level of the student. On the other hand, if you are told that a certain move is correct you'll learn why best if you can figure it out for yourself. That may take a long time and many more lessons but when you finally learn it you will really have learned it deeply. One more thing, even dan-level amateurs aren't really strong players in any absolute sense so often they might not be able to express the reasons why they'd play a certain move themselves.

[1]: Stefan: This is key, I think. When the teacher makes a statement, it is usually because the student doesn't understand the rule well enough and shouldn't care too much about the exception yet. As long as teacher and student - and the majority of us are both depending on the context - always keep in mind that go is a game of general rules and a good portion of exception, all will be fine.

Opening example on this page moved to BQM 371.