I had the following opening in a recent 2-stone handicap game. I've been playing 5-4 openings a lot lately, and I don't recall seeing White 4 before. I haven't been able to find it in any joseki sources, although I did find some middle games with it in gobase. I played the corner as in the second and third diagrams, sacrificing the 3 marked stones and giving White a ten-point corner in gote for (I believe) substantial influence on both sides. Did I have better? -- golearner (14+ kyu, IGS) 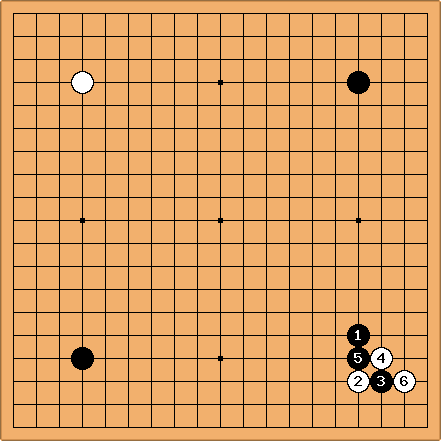 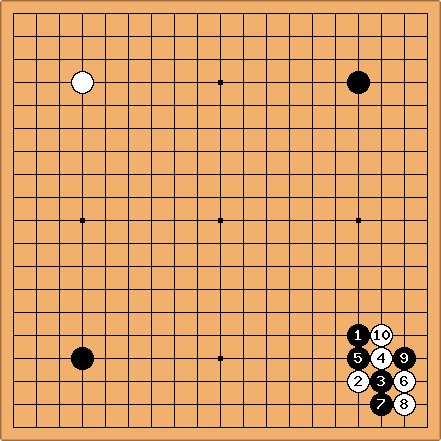 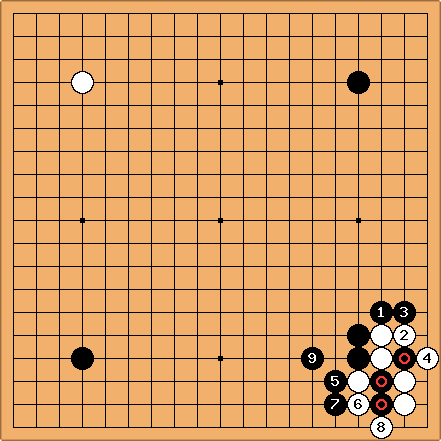 MrTenuki (KGS 3k): Let's do a Tewari on your sequence in Diagram 1.

This is the sequence from your game. Now, suppose that Black played

In this case, Black opened at the 3-3 point first with

, attaching at the 3-4 point, is clearly not the right approach. The hane with

punishes White's mistake, and White tries to introduce complixities with

is theoretically an option as it is extending from a crosscut (which may be good "if there are no other stoness nearby").

Of course, one could argue that if this were the board position, it would be better to reinforce

, as that would allow black to capture either

. But as the game sequence suggests, this is certainly playable.

Bill: You show good instincts. :-) Here is a slight improvement at the end. 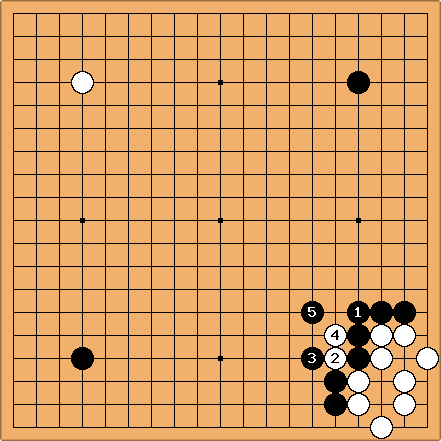 is tesuji, protecting against both cuts. If

captures in a net.

Bill: Compare the result after

Skylancer (3k): I would agree with everyone else. Black is doing great after this sequence, perhaps a little moreso after Bill's suggestion. Black's wall is working well with the 4-4 in the two corners to create a large sphere of influence, which should be worth more than the points White got in the corner. Black is set to build up a framework, or to attack strongly, or both, depending on what White plays. Of course, the trick is figuring out how to make good use of that, which can be hard around the 14K level.

The result is very similar to what would happen with a White 3-3 invasion if Black had played 4-4 in that corner, except that White gained a few extra points in the corner with a big loss of being sealed in completely.

White has done nothing so far to make up the small handicap. I believe Black should be satisfied. =)

unkx80: The following sequence is food for thought. I am not saying that this sequence is necessarily any better or worse than the other suggested sequences. 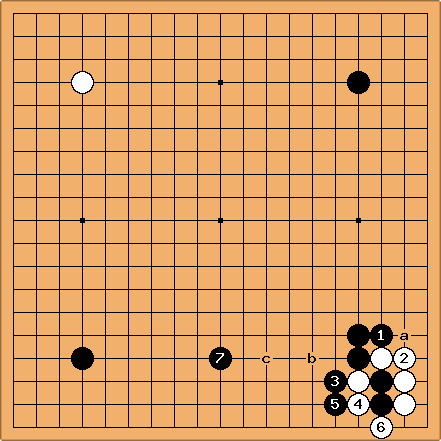 I think Black can consider

, which is essentially a one way street. Right now, a feels small, so with sente

can play at the bottom star point to form a framework.

could also be at b (or even c), to protect against the cut. 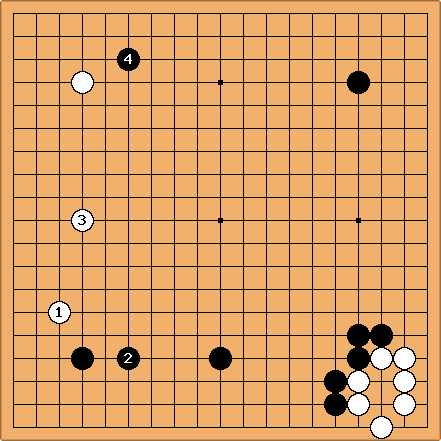 The orthodox play for White would be to approach at

to prevent the double wing formation. Then after

, Black can make an approach move at

. This seems to be a pretty playable game for Black.