The issue of old vs new josekis has come up. I'd like to discuss a specific example: 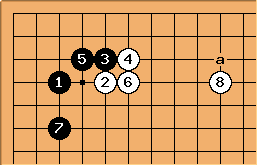 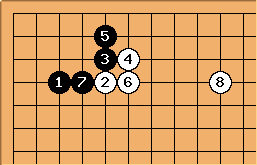 Both involve a high approach to a 3-4 stone. The "current" joseki is frequently played today. The "old" joseki, which Kitani liked, you don't see nearly as much. The white stones are identical and in both black has sente. Has the "current" joseki superceded the "old" one? If so, why? Under what kind of whole board situations (if any) is the "old" way better than the new way? I have some thoughts, but I'd like to see what other people's perspectives on this are.

Bill: As sort of an aside, how new is the current joseki? I thought that it predated the Kitani joseki (with

at a), that the Kitani joseki never got that much of a following, and that it is still occasionally played, anyway.

was traditionally at a, but how much does that have to do with the choice of

as a sagari, for White to try to make territory on the side with a low extension is not so appetizing, so

on the 4th line is usual in that case. 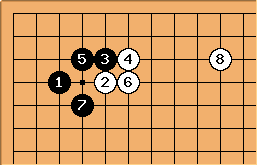 is even older, no? 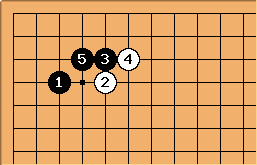 Even though I think this also appears in antiquity, the tenuki is often played today. The thing is, as Fujisawa Hideyuki, I think, pointed out, if the current joseki is played in all four corners, Black has a commanding lead.

Bill: All that having been said, let me risk an opinion. The Kitani joseki is normally inferior to the current joseki, to the tune of 2-3 points. It should be played when the top side is particularly important, as when Black can attack the White group, or the open skirt offers the best chance for a reduction or invasion. It might also be right when Black's extension on the left side doesn't accomplish much. 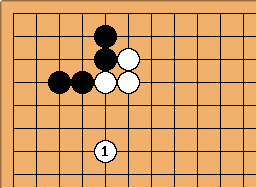 Calvin: As a side comment, if you consider the position to

in the old diagram as fixed, this is the most common variation for white. If black is playing the sagari to reduce a moyo, it is often the case that white's stones don't need to extend to get a base, and therefore one can think of

here as continuing with the center emphasis. One can find quite a few games where this makes sense for both. 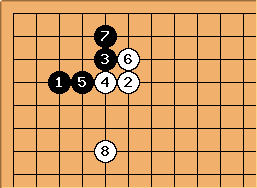 Calvin: It's the same as this variation, and so we can find it in modern games of Rui Naiwei, who is fond of the distant high approach. 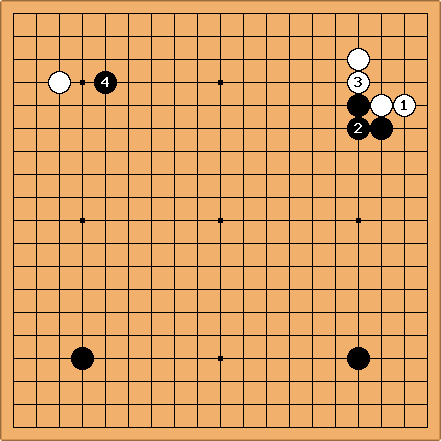 Bill: This is the earliest example I found on Gobase of the Kitani joseki. Kitani may have not liked the following variation. 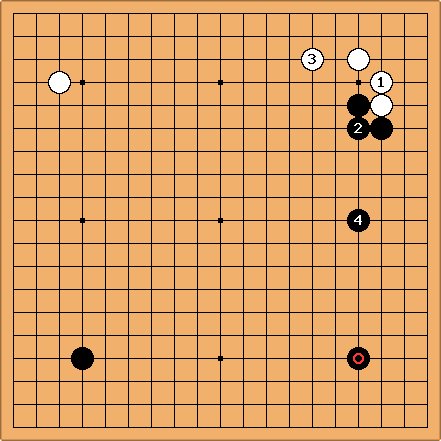 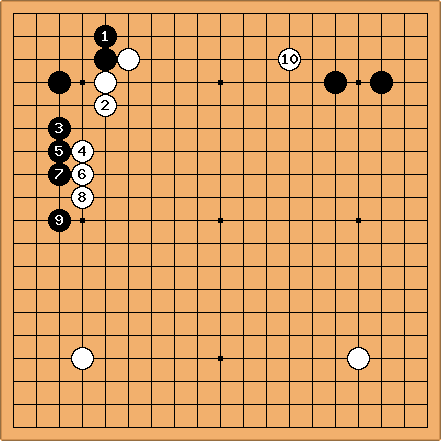 Bill: The Kitani joseki continues to be played into this century. Also from Gobase, this is a 6-dan vs. 6-dan pro example from 1990.

I do not understand why Black chose

Black seems to me to be too low overall. I like White. (And White did win by resignation.)