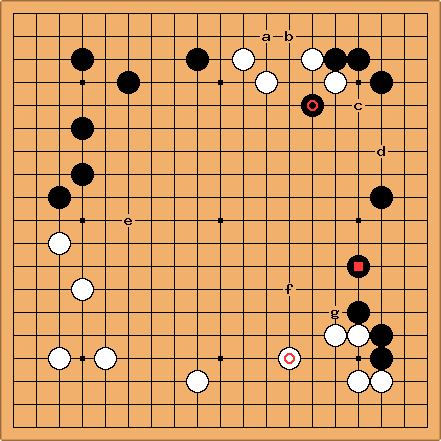 I was reviewing a game I played as white and won by about 10 moku when I found this little attack. If nothing else, I think it helps B break into the center, and if white responds incorrectly, puts the entire white position on the top in jepordy. What do you think?

hasn't accomplished much. In fact the exchange looks like it helps white to me. True, black can jump in at a or b and connect one way or the other; but he could do that anyway, without peeping. I think

at c would have been better.

Velobici: Agree with zinger. How did this position arise?

LukeNine45: Make that three of us. If Black plays c, he's got very little aji in his framework. White's formation (bottom and left) looks easier to invade, and white has a weak group to worry about, so I think black should have an easy game. (After Black c, if White invades at d Black should find it easy to arrange a splitting attack). The points e and f also look big (border of two moyos).

zinger: I'm not sure I agree about black having an easy game. Black's formation in the top left looks overconcentrated, and yet has not really secured the corner territory - what if white attaches at the 3-3 point? White's distribution on the bottom and left looks more efficient. On the other hand, white's top side group is a nagging weakness. I think it is a fair game.

LukeNine45: I was assuming white can't successfully invade there. If white can, then I think it must be close to an even game (and that Black should have played differently there). Also, all my statements only carry a 3 kyu warranty...

unkx80: I cannot say that

is a bad move, but it isn't that good either. White simply connects.

Overall, Black looks cramped. On the right side, the

stone don't seem so well placed, especially when White decides to play at g (it might be better to cut first then play g, but maybe not). 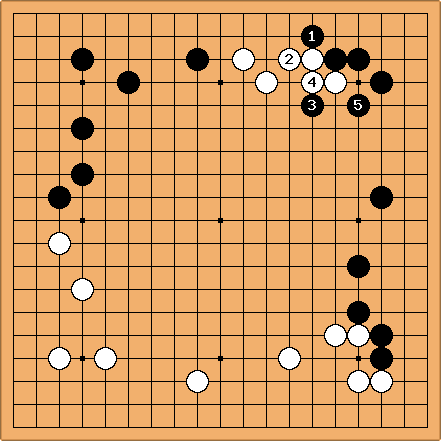 Alex: I agree with everything that's been said above, but if you really want to peep at

, wouldn't it be better to play

first? After all, W would not answer

Of course, the problem is that White is under less pressure to connect after the

exchange and may fight back or simply ignore the peep.

(P.S.: Zinger, I'd be very surprised if W could live at 3-3 in the top left... Black's too strong in the vicinity, he can start attacking the eyespace right away because White can't escape) zinger: I was thinking of it as aji for later, when or if white has more stones in the area. Then there might be a ko or something. Anyway the shape looks disturbing to me - the stone on the 6-4 point really looks like it should be on the 5-3 point.

here would be better at