Phelan: I recently had a game where I invaded at

and had my opponent reply with

. What is the correct way to deal with this? I think I've seen some comments on this somewhere, but can't find them. 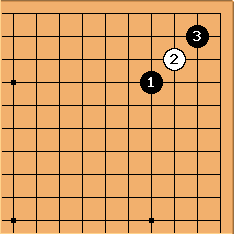 Petri Just Push out? 3 will have hard time living, but there is no way to confine 2 to corner after this. 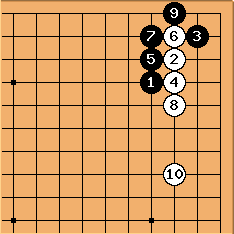 Bill: I think this simple sequence is good enough for White. Black still needs an extension. 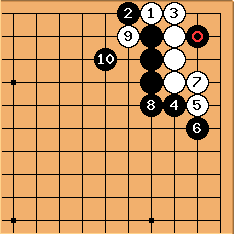 , Black can play a two step hane with

White is still not alive. 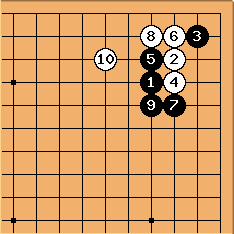 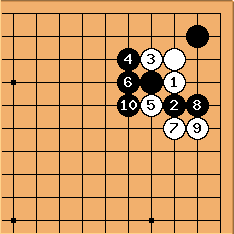 Alex: To expand on what Bill said, Black may also play hane with

. If Black extends with

, White can just crawl at

and take a pretty big corner, while Black's 2-2 stone is mochikomi. It's actually better (?) for Black to hane again with 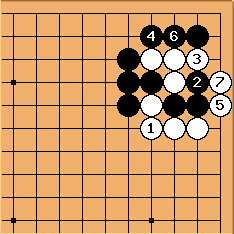 Alex: Black will retake a small corner and get a bit of a wall and a bit of a base, while White is happy with a three-stone capture. This, I think, is quite favourable for White, especially since White gets to choose the direction in which her thickness will act (by choosing between the two possible cuts at

in the previous diagram). 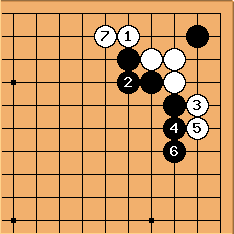 Bill: How about something like this? White gets a sizable corner, and Black still has some insecurity.

Alex: Another, more psychologically-based option is tenuki. Ridiculous, you say! And I am half joking. 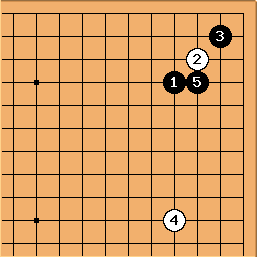 is tenuki (doesn't have to be at the point shown here... could be anywhere on the board), then

more or less retakes the corner, and the exchange of

looks bad for White, even though

Thad: Is it bad? Basically looks to me like Black played two more moves to get effectively 12 points. Consider the following diagram, 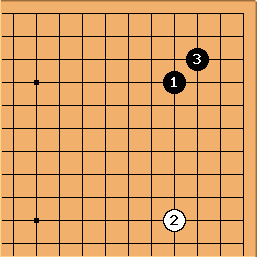 No joseki book says B 3 is a good move immediately. What is the difference here? 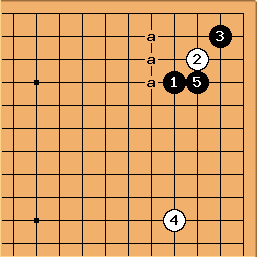 In exchange for a bit of influence W has aji demonstrated by playing at the points labeled a, B has a small bit of influence of the 1,5 wall. In general I would say White got the better of it. Of course the validity of this depends on the whole board situation. In this case it seems more then most circumstances. 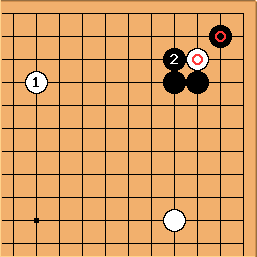 However, I'm guessing that this move was played against you on the Internet, and that the opponent played many other unreasonable moves over the course of the game. Most unreasonable players are also addicted to capturing stones (aka kyu disease), so if someone played 2-2 in response to my 3-3 invasion, I would anticipate that if I played tenuki a second time, he would immediately follow up by capturing with

does remove a tiny bit of aji in the corner, but not a whole lot), it looks as if... 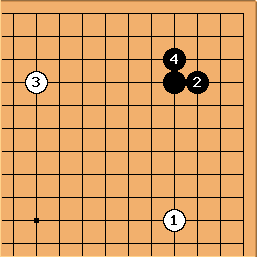 As I said, I'm half joking about this, but I do think a lot of opponents would play twice more in the corner if you just abandoned the position - you'd have to be pretty sure they'd do so, though, because if they only play once more (as in the first diagram), your tenuki doesn't end up looking like a good idea.

Phelan: Thanks for all the replies! Actually this happened to me in an DGS 13x13 game. My opponent was a 25k, and I was almost sure that 2-2 was a unreasonable response to the invasion, but wasn't sure how to deal with it. I only remembered reading that trying to capture the 2-2 stone directly was wrong and would lead to the group's death. I think I saw it on SL somewhere. This is how it went: 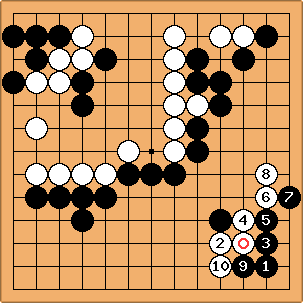 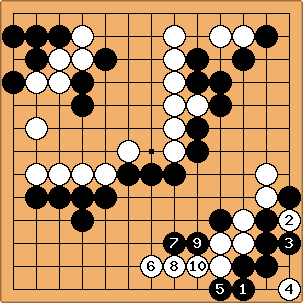 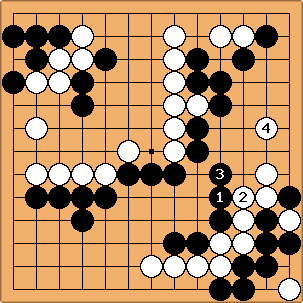 After this I was completely sure my group was safe. I'm not sure if the moves shown would work on this case as well, but I was curious as to how to deal with it on a 19x19, and that was the reason of this BQM. By the way, I was trying to indirectly kill the 2-2 group. Was this unreasonable?

fractic: Looking at the board just after the 33 play by white it seems that white will win if he lives. So living by trying to kill the 22 stone looks reasonable to me. If black tries too hard to save it you probably can get out as the above variations show. 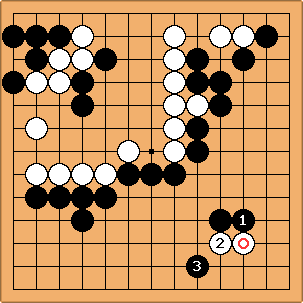 fractic: This looks like a more reasonable black attack. But there seems to be a quite some space for white so killing could prove too hard. But black has to kill if he wants to win.