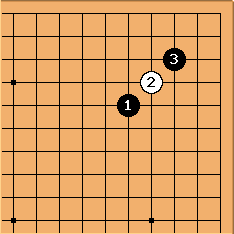 There is an obvious sense of deja vu here. :-) However this noseki does interest me. I can't see a reference to this in Pieter Mioch's GoBase article, or any hint in Kogo's Joseki Dictionary. How to punish

? Can it be punished? 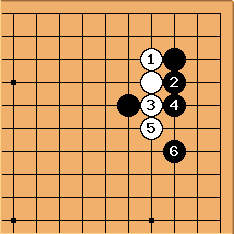 Alex: Isn't cutting off the original 5-5 stone and making a wall good enough? 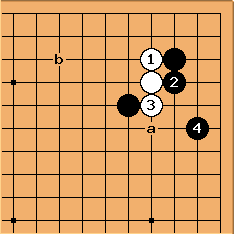 I find these hard to judge, because it looks so strange ;-) After a Black can play on both sides. I don't know if this is sensible or not. 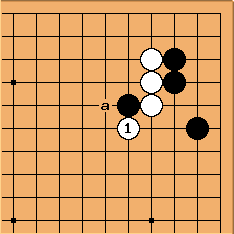 Alex: Hard for me to imagine White being dissatisfied with this, even if Black gets to play on the top side now. Later White can capture with a and become very thick.

fractic: Playing 3-3 looks really inconsistent with the original 5-5 stone to me. So either Black is making a strategic error right now, or he did so earlier making the board so that white can probably use the influence here.

Charles It's worse than that. Black had the chance to break the symmetry (favour the upper or the right side). By playing this way, Black gives White the choice of direction. Added to the local ugliness of forcing White to blight the 5-5 stone, you get the feeling that this is only to be used when the 5-5 point was already a mistake.

Andy Pierce: One might suppose that the 5-5 stone was played for influence rather than for territory. On this theme, we could examine whether by forcing white to eat the 3-3 stone, black can get even more influence. Accordingly, black would respond with this

. I can't figure the continuations after that. I suppose that white turning around the 3-3 stone at this point is slow and/or submissive so that white will initiate a fight along these lines. How to proceed from here with white? 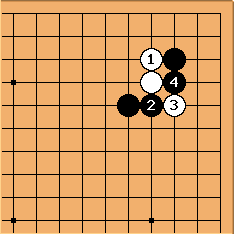 has to be at

Alex: Agree. I don't think turning around the 3-3 stone is slow or submissive at all. Again, it comes down to tewari: 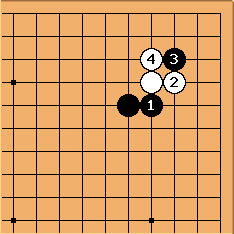 Alex: Rather than playing at the 3-3 point,

looks like reasonable play for both sides, no? However, exchanging

is clearly idiotic for Black. How could White complain about this result, whatever the move order? In other words, if Black wants to use the 5-5 stone to make influence, he should do so - playing 3-3 first ends up looking like a worse-than-wasted move, as well as allowing White to choose the direction instead of Black.