First the position, taken from Whole Board Thinking in Joseki (vol. 1), problem 49. White to play. 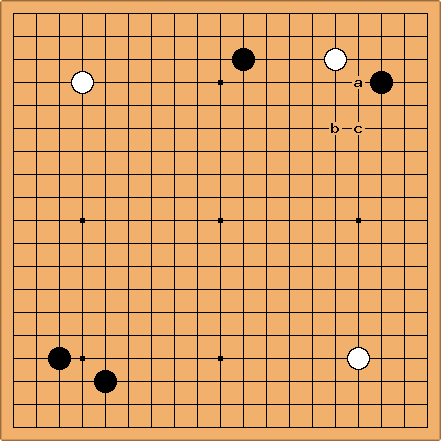 The "correct" answer given in the book is at c. The continuation diagram shows a fight developing in the centre, which the text indicates should be good for White thanks to the star-point stones in the adjacent corners.

Move b is listed as incorrect because a White jump will provoke Black to develop down the right side, hurting the prospects for White's development in the area.

These seem to be eminently reasonable answers, but is it the whole story? This exact position has appeared in professional play no less than 20 times, 19 of them were played since 1971 (i.e. with komi) based upon searches of SmartGo, GoGoD and miscellaneous additional games. (Erratum, one other game was from 1956, with 4.5 pts komi).

The professional responses in this positions are interesting: 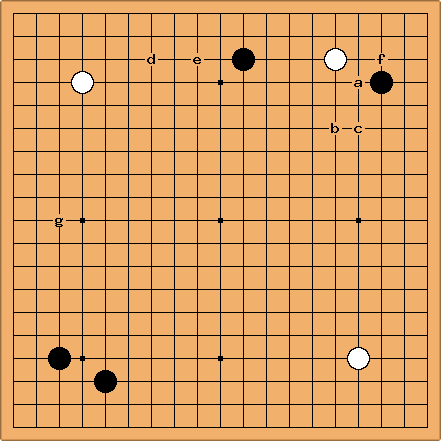 In actual play, the professionals overwhelmingly favour the "incorrect" answer of b, it being played in 10 games out of 20 and yielding a 70% winning percentage. Next most favoured are a (another "incorrect" answer) and d, each being played three times. The book's correct answer? Only played once, although resulting in a win.

Clearly when the likes of Cho Chikun and Cho Hun-hyun play an "incorrect" answer, they know something beyond the simple explanation. Clearly the title holders think it's playable. Would someone care to take a crack at explaining why b seems to be so much popular than the taisha and why, if it is "incorrect" does it have such a good winning percentage?

Calvin: Mr. Yang is a great teacher, but is somewhat didactic. What he is teaching in these books is one consistent, logical way to think about the opening for amateurs that do not have the time or skill to consider lots of complicated alternatives. Deeper tactical considerations can always override rules of thumb. With respect to avoiding the taisha, it's a question of style, and even top professionals will avoid some large-scale josekis if they think it will make the game unpredictable or a contest of scholarship that might favor their opponent. They have a lot of money on the line; amateurs usually don't.