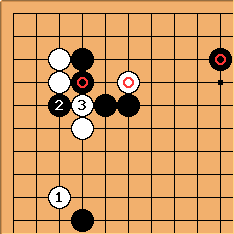 Black responds to White's high approach to the 4-4 with a low pincer (marked black stone). The joseki continues until White plays 1 instead of 3. So Black cuts at 2, followed by White 3. What is Black's follow up?

Chris Hayashida: I am not sure that

is played. Consider this diagram: 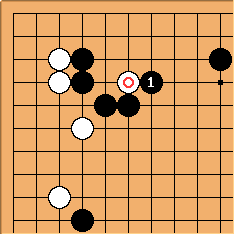 Chris Hayashida: The marked white stone can still cause problems for Black, so the proper move is probably still to control it with

. After securing his position, Black can look forward to attacking White's position, since it has many weaknesses. 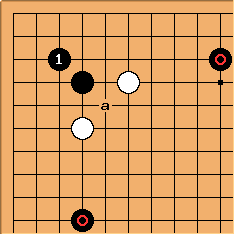 Chris Hayashida: Note that since Black has the two marked stones, it might be better to play

instead of a. It's hard to say, because we don't see the rest of the board to know if those two stones are part of strong black groups. If they are, then forcing White to play the outside will be advantageous for Black. If they are not strong, then this line should not be played. 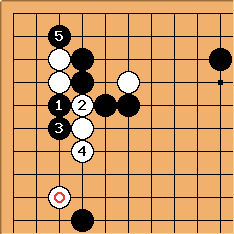 might work, but it depends on a ladder towards the lower right.

threatens a ladder. I think extending with

is the best answer. The problem is that after

will take more of the corner, but I don't know if that's the answer you are looking for. I think the first diagram, leaving White's position thin, is the correct approach. You can pressure from the outside later, and wreck White's potential territory.