Baduk Made Fun and Easy 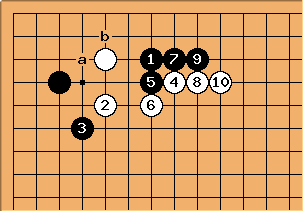 Baduk Made Fun and Easy

Do Korean professionals prefer to play

immediately without first playing at a in the corner followed by White b,

and only then at the point of

? I was under the impression Black playing a was an important point.

erislover Some minor additional comment on this joseki... After the a/b exchange, Essential Joseki suggests that black must push along the side before your

else white can descend, aiming at the a or b hane in the diagram that follows. Without that exchange white's hane at b is a failure so it seems the order of 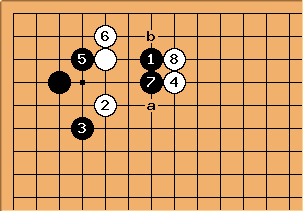 then white can choose the following joseki. It is good for black since he ends in sente, but white is not bad either being almost settled. The choice for either of the players depends on the wholeboard position. 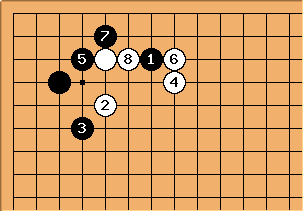 Dave: If you look at data on professional play, this alternative

became the preferred response to

around the mid 1980's. There are very few examples of the so-called basic joseki these days. Beyond that the original pincer at

is out of fashion with the pro's. When I looked at Baduk Made Fun and Easy it seems like a very superficial introduction and no serious student is going to get anything from the joseki colums at least.