As white, I often like to play 3-3 by the reasoning that it is very fast and very solid, leaving my hands free. It also tends to devalue two sides from the more common shoulder-hit approach.

However, I've been coming across this lately. 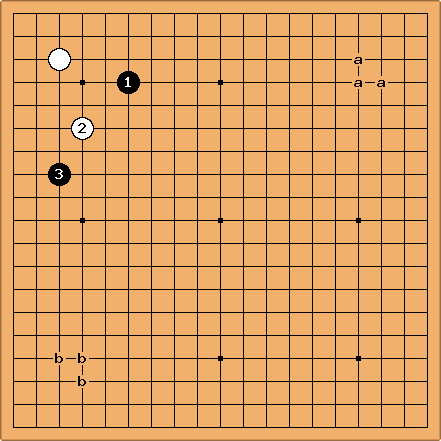 Of course the board is not empty at this point, but I draw it this way to better understand the possibilities of the position.

It is said that the 3-3 stone, by itself, does not easily admit a pincer. But from this position I feel intuitively compelled to pincer. This feels like an overplay to me. I suppose the opponent thinks that either

would serve as an extension from their corner stone in a parallel fuseki. But to me it smacks of trying too hard because there is so much room.

my mindset is: 1) a wedge, 2) has the possibility to connect under

, and 3) might also establish a large side by a low approach to the 4-4 stone. When I look at this position as it stands by tewari that

is an invasion across a sector line between

. But isn't it too early for such a reduction maneuver? It seems that white gets to develop more and black has only broken up a potential moyo (that in reality would probably not have formed in the first place, given the nature of the 3-3 point). While

is not under any huge pressure, it seems to have been rendered pointless.

Sometimes I feel it is important to pincer the other side, in which case a five-space extension from the hoshi stone feels right. High to stick with influence on that side, and to avoid some fighting that may make white heavy if it is low. In this case again, by transposition it seems like black has instead invaded a moyo early. I feel like white's stones are working together to accomplish what was probably true from the beginning anyway: that the two sides radiating from the 3-3 point are "uninteresting." And it seems to my eyes that black cannot accomplish much here, either.

But am I missing something? Are white's pincers overplay and that is why not much gets accomplished? As a final note: 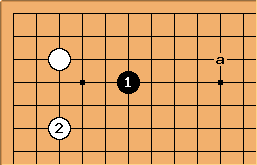 followup discussed above would not work to white's advantage. I don't feel dissatisfied here because, let's face it, by playing 3-3 in the first place I accepted a low position with little influence.

As a side-note, I've been stuck at the same rank for a while now and I've been re-evaluating the way I think about positions. So if this is a vague BQM, then that is why. Thanks in advance for any ideas. 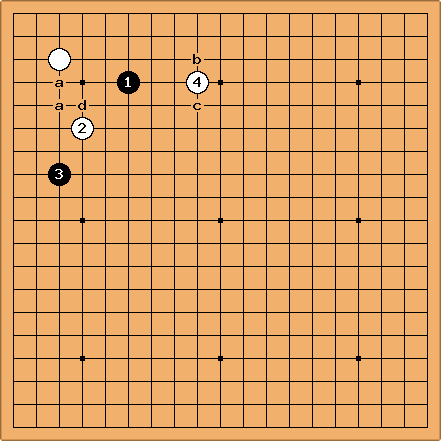 Bill: Because of White's weakness on the a points, it is hard to call

an overplay. However, an extension to

. A pincer at b does not seem to me to put enough pressure on

, as a rule. (B c looks pretty good against it.) I do not, as a rule, like an immediate pincer against

, because if Black responds on one of the a points, it doesn't look too good to let that stone connect to

. So I can't put much pressure on

is joseki, but White also has a more solid reply at d (among others).

erislover: Thanks for the thoughts, Bill.

there does seem much more severe than the low pincer I've used. 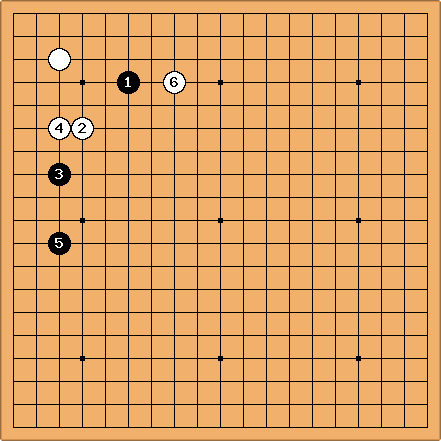 Hicham: What about this? White takes points, Black has to defend with

, and then wite can attack the original approach stone. Depends a lot on the global position of course, but I would like this strategy with white, not much aji left in the corner and the Black stones are all attackable.

ends up looking misplaced. Imagine if

were already in place and Black made an extension to

would seem unbearably timid. But of course, then Black's approach at

would be much too close to White's solid position. I don't know if

is really that bad, but it doesn't feel right to me. 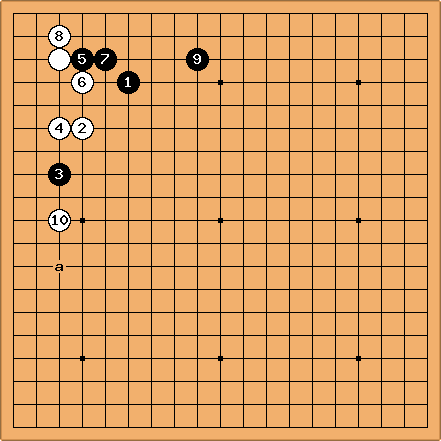 shores up White's weakness, and would be OK in some contexts. However, Black can regard it as kikasare, and thus regard

as a kikashi stone, to treat lightly. At first glance the sequence through

looks fine, but compare it with the following sequence.

Alex: I agree with you, Bill, but just to play devil's advocate: your argument, as shown in the next diagram, proves adequately enough that this line of play is (usually) bad for White, but it still isn't clear that

is the mistake, not

does seem like an excessively tight pincer here, given White's solidity.

I still doubt that

is likely to be the right move in most circumstances, but couldn't White achieve a somewhat better result by making a wider pincer? (of course, that depends on the lower left corner)

Bill: Alex, I agree with you about

's being too close. I would think that a pincer at, say, a, would be better. However,

is easy to throw away, in any event. The point is, really, that

is too solid because Black has

, which makes White overconcentrated. See the second diagram below. 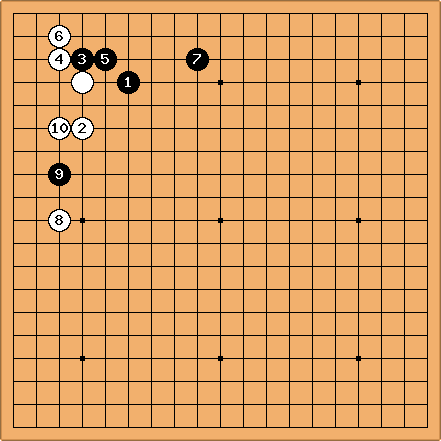 Bill: Everything is normal through

may be premature, but then 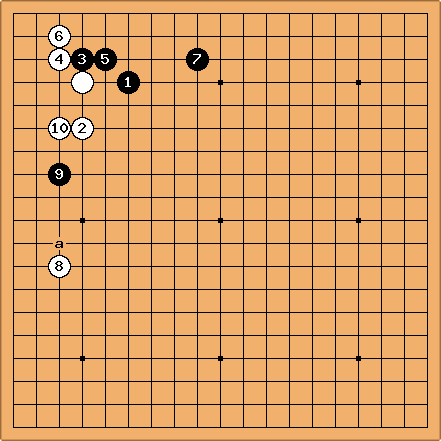 Bill: In this diagram, for comparison when White makes a more distant pincer,

is not an unreasonable response to

may not be premature. However, White's extension to

is thin. The same would be true if White only extended to a.

Dave: Overall there is a logical inconsistency in Black's play. The 3-3 is symmetrical so Black presumably had a reason for approaching from the direction of

. To quickly turn away to approach from

, is an invitation to White to play against

. Make that your aim and you should do OK in whatever fighting comes.

What do the pros play? 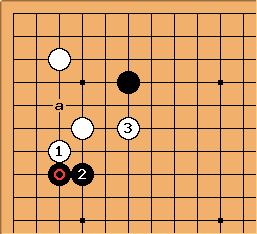 This is one idea, warranted by a strong pro.

gets out and divides Black up. There is a weak point left at a, but White can think aggressively.

Bill: Note that the exchange,

, makes it hard for Black to treat

lightly, as he can when White simply makes an iron pillar.

erislover: Ahh. It amazes me how often patterns from corner plays start appearing around the board as I get stronger. This is a nice attack. And while there is a white weakness at a it does not seem like black can use it to connect the original

stones, so white can get a nice bit of attacking going.

Charles The other idea I found was tenuki. It is hard to attack a group based at 3-3.