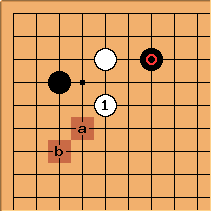 is the most common answer to the tight pincer

. The answer at a is the standard play here. At b is the only real alternative: it is steady, and Black can hope then to develop on both sides. 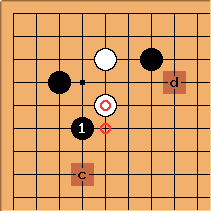 shows consistent, natural aggression. White has to find some way to deal with this play other than pushing at the circled point [5]. The two major answers for White, at c and at d, have varied in popularity over recent decades. To play at d usually allows Black to take sente. On the other hand to play at c can mean large-scale fighting. Just recently the pros have been preferring c. 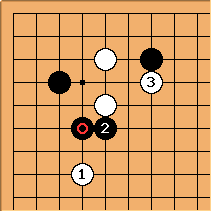 is just about forced. Then

is an inducing move, setting up

. It also obstructs a black extension along the left side. 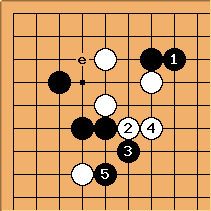 is the main line continuation. Black may instead try

at e, to trade away the pincer stone. 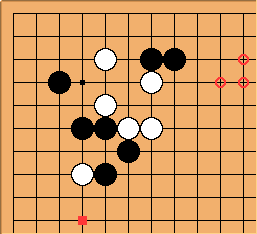 After that, White has a choice of way to play: at the square-marked point to fight on the left side, or at one of the circle-marked points to attack on the upper side.

There are many variations on the way to this position, though. 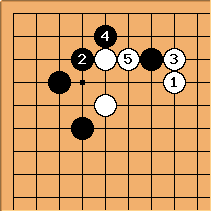 these days is followed by

at once, but can leave follow-up moves here for a little while.

Black takes territory and sente. White was playing this way 15 years ago; but now the line above is seen again. 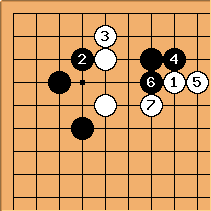 Developing on both sides 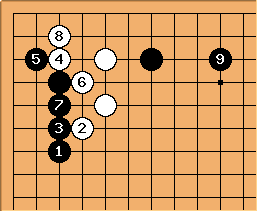 on the third line instead, White can settle easily with well-timed kikashi

, developing on both sides. Black has quite a low position, though: this isn't suitable in the context of a large-scale plan. 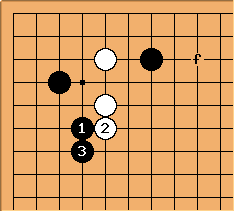 Forcing Black to crawl along the line of victory, while pushing the cart from behind, is considered a basic mistake for White (see fourth line, fifth line and pushing from behind). Strong players consider such plays only in exceptional circumstances.

Incidentally, when White pincers the original pincer stone around f, that stone can be considered kikashi, as it has already produced profit in the form of the fourth line territory, so that it can be sacrificed in the most profitable way.