This position comes from Intermediate Level Power Builder Volume 1, chapter 3, diagram 12, page 28 where it remains unanswered. Where is black's best next move, a,b,c, or d? Why is this best? 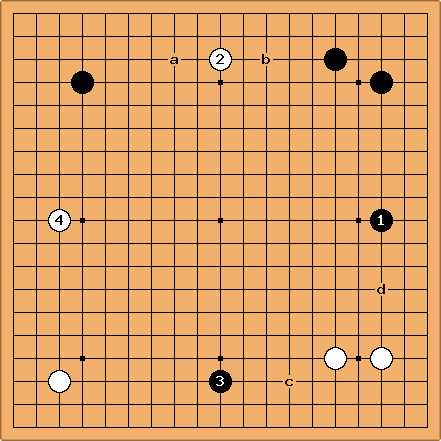 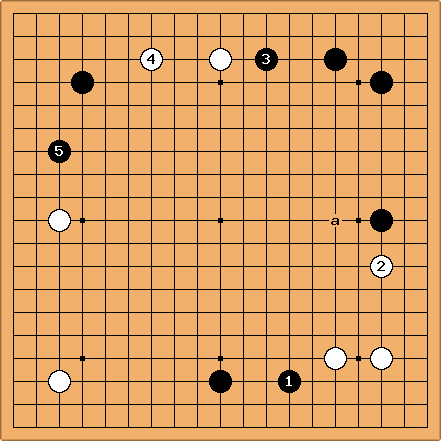 Charles Matthews I would go for c; it looks most active.

I would think of this continuation as a 'natural flow'.

builds up the top right, and

is a standard response to

zinger: I thought that

at a would be the natural response to

in the diagram looks small to me, being on the flat side of the shimari. Perhaps my thinking is wrong ...

Bill: I also like c, since it has a good follow-up against White's corner. However, I suspect that the official answer is b, to make a double wing, albeit a fairly small one. 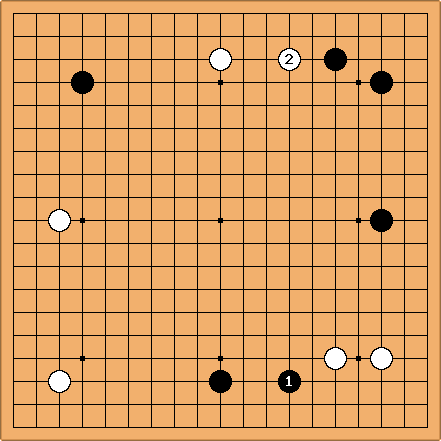 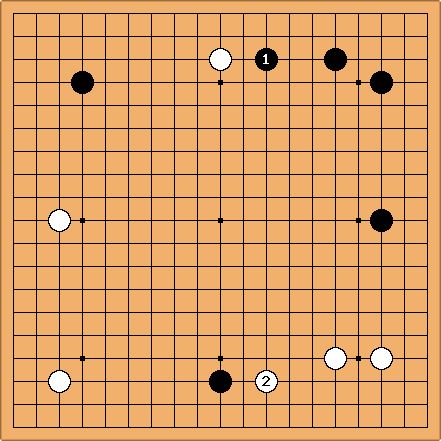 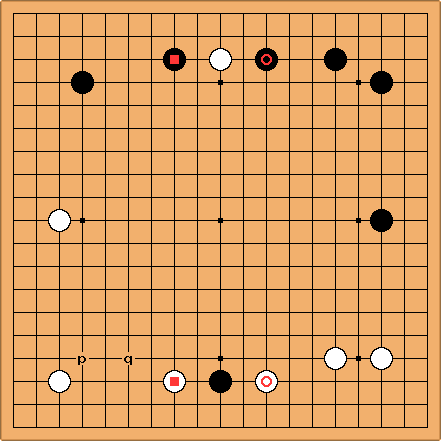 This could happen. On the whole, White is doing all right. The

stone invites Black's shoulderhit at p. (White could therefore get fancy, playing at q instead of

.) As the pros tend to say, the matter will be decided by middlegame strength. But here White at least has a coordinated position.

But on the other hand White can hope to take sente as the upper left is played out, and come back to the lower side. 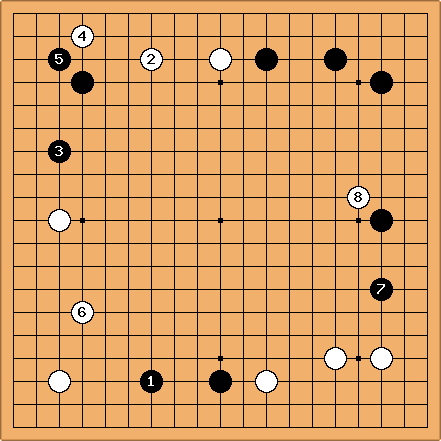 Bill: I agree that Black should not allow the pincer on the bottom side. Here is one possible continuation if Black makes a base there. 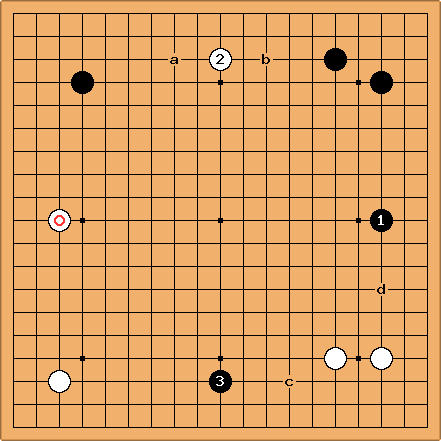 kokiri - Is b clearly better than a? I ask because, until recently I would have chosen b (of the two) without thinking, but i had a series of discussions with a 3-Dan who introduced me to several new ideas, one of which was that in many (early) situations, extending from a single stone is preferable to extending from an enclosure because the single stone is weaker.

Charles Reasons for preferring b: firstly, it improves the existing framework (in other words it takes account of the stone already on the right side, where there is likely to be fighting); secondly Black at a is not an ideal relationship with the 4-4 point. Against that one has a general thought, that extending from the fourth line stone is bigger (more ambitious)than from the third line stone.

Another point is that after

of the first diagram, Black actually can't play the top left corner on a big scale. Any play there will fundamentally be for taking territory. So, less urgent. 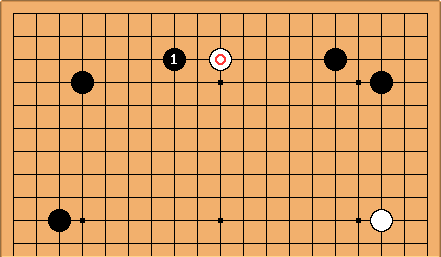 If the stones on the left and right sides were switched, I feel there is every reason to do it the other way.

Bill: kokiri, you can make the same kind of comparison. 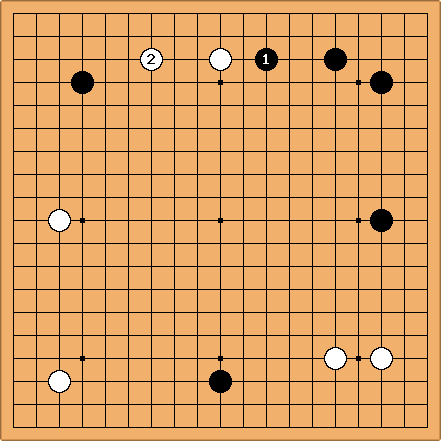 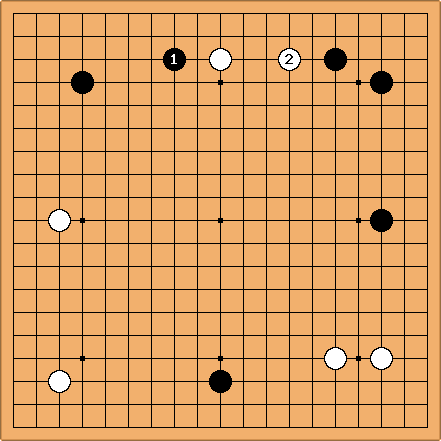 Bill: Also, to address the 3-dan's point, which I think Otake makes, if you just look at the top side, the approach from the single stone is better. But the fact that the approach from the right makes a double wing tips the scales in its favor. (Aside from the weakness of the particular extension to a.)

Dave: This position is already unsual at the beginning and only gets more so as things go along... 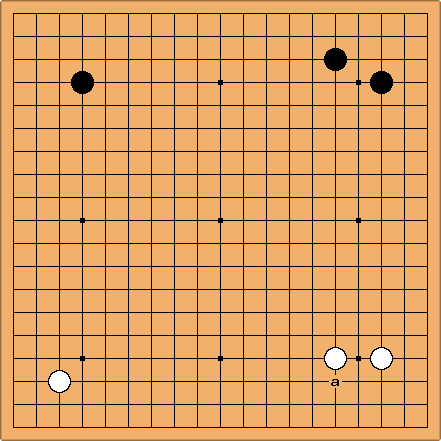 I searched for this in my database to see how the pros handle it. No hits, hmmm... Why not?

Velobici: There is one game at least: Sakata Eio (white) vs Rin Kaiho 3 February 1977. Sakata played at a. Rin won. This may be the expection that proves the rule (and the point of your comments). 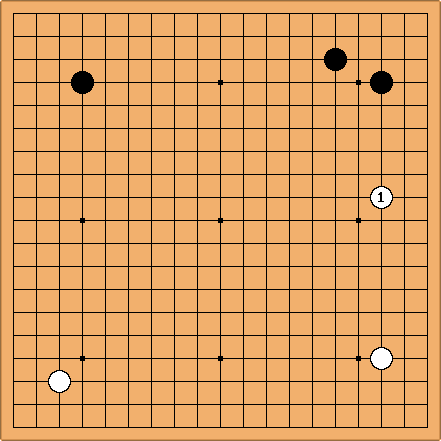 This is already very rare. In the few examples found, White mainly extends first on the right rather than allow Black the perfect extension between two opposing shimari. 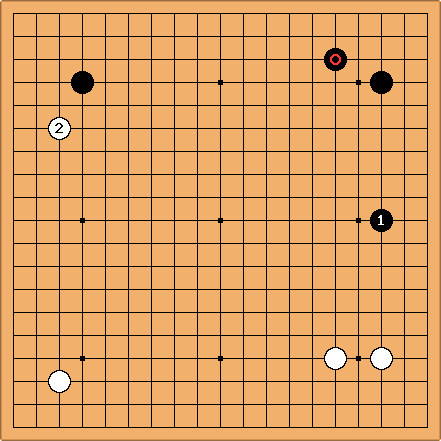 OK, so White lets Black get in

. Then looking at the top half of the board, there are no cases where White plays to split the top side. This should not be interesting with the marked Black stone in a low position. Usually White approaches at

(admittedly from different positions in the lower left). 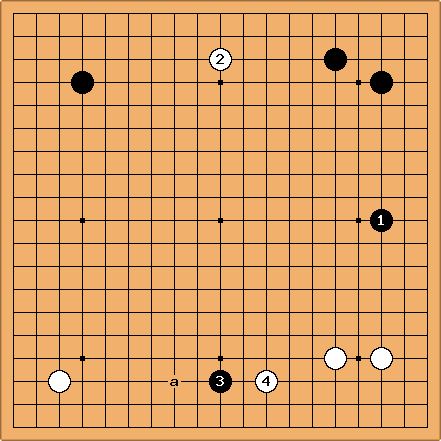 is a common play looking only at the bottom of the board. However, in that case

against this shimari / 3-3 setup. In twenty-four cases White played

and in one case from the opposite side at a. 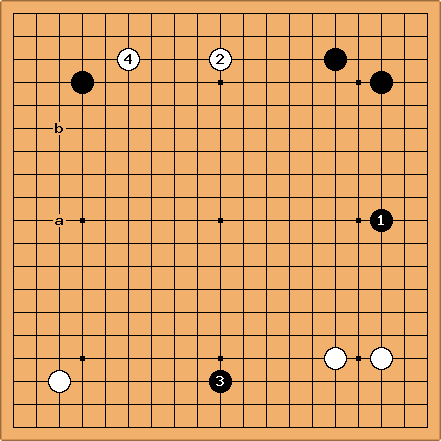 OK, ignoring the bottom and concentrating on the left side, there are almost no examples where White splits the left at a. The most common play by far is the approach at b. The second most common is

on the board, this looks like the logical choice. 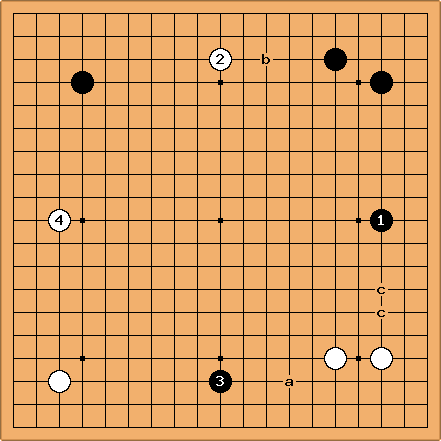 So it looks like Black has made good powerful plays while White has been off the mark in her replies. Personally I support those who proposed to play next at a since I think White has really left a major weakness uncovered here.

In terms of playing b to create a double-wing formation, this is a common idea looking at the upper right corner. However, it seems to be about equally common for Black to extend down the right to one of the points marked c rather than play at the top in professional play.

Charles Yes, I'd done similar analysis. It looks more like a composed position (or amateur play :( ...). So we get back to looking for the point of it all. My view: White has a clear preference on which way to play the lower side. Black has a more marginal preference on how to play the top side. So, perhaps this is all about 'shading' supposed miai points.