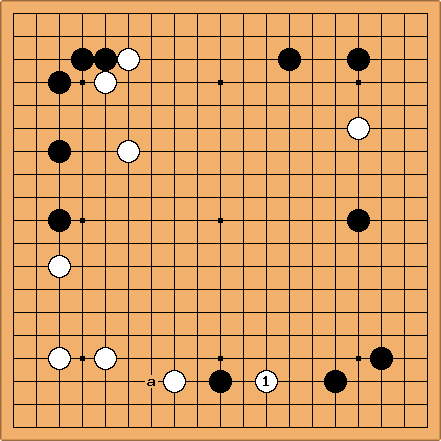 In a 3 stone handicap game (Black had free placement and chose three 34 points) White decided to make a deep invasion, probably feeling that he is the stronger player, and he needs to catch up.

How should black react?

Chris Hayashida: I know this isn't answering the question, but I wanted to point out that the black extension might have be a little weak.

If Black extended first, after White plays the checking extension, I feel that Black needs another move to protect. Black also has the option of extending to a right away, since it threatens to slide into White's corner.

If the black stone was a checking extension (i.e., White extended first) then I feel that the black stone is playing too close to thickness, so I think it "deserves" to be attacked by 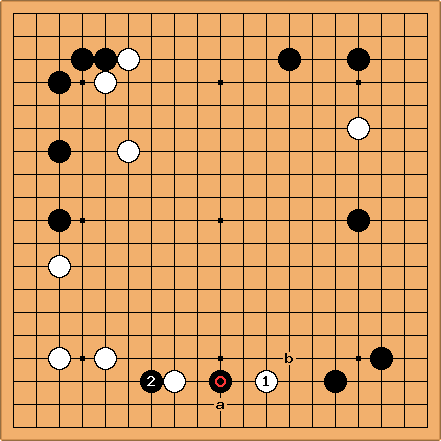 Bill: The problem with both running out is that White is stronger on the left than Black is on the right.

will have an easier time of it than

. Besides, White can always play at a. Sacrificing

with B b comes to mind, but seems too pessimistic.

My inclination is to probe with

, possibly sacrificing it to strengthen

to live in White's corner.

Maere: I do not think b is too pessimistic. It looks like the right direction, consistent with the black moyo on the right. Isn't the influence gained well worth the loss of 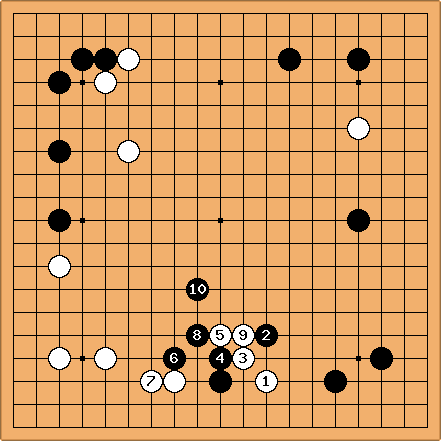 Bill: Here is another thought: the boshi,

looks good. If White plays to the right, instead, Black can play into the center (

, for instance) freely, satisfied at having prevented 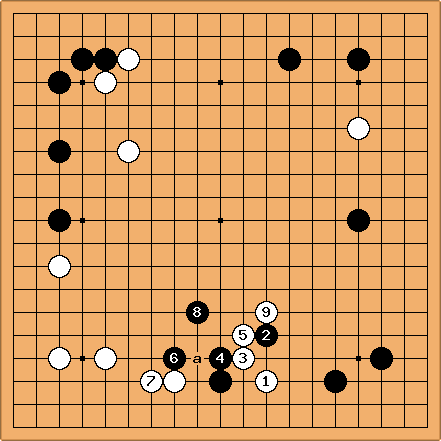 In the Boshi diagram,

is bad, I think. Black can cut at

is better. Your criticism still holds, because of the weakness of

dnerra I didnt see the attachment either, clever move! I think moving out with the diagonal move at a is still better than pushing with through your own stones with the exchange 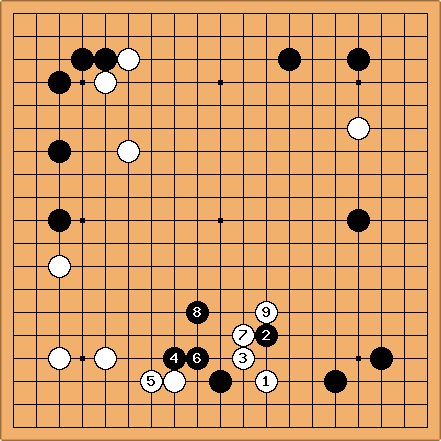 By the way, how about attachment move

I think, instead of

in below diagram might produce a slightly better result.

is more far by one-line from white's strong two stones(

Obviously, this is more desirable shape for Black.

Bill: The fact that Black can play

The following diagrams are some of what's going on my mind. But Im not sure if these are best for black. Anyway,

invasion is an overplay, Im sure...

And, in my view, Bill's second diagram is black's failure.

Lastly, I Think that the attachment move in Bill's first diagram,

, is considerable move. Sadly, I dont know which variation after

is best moves for both, black and white. 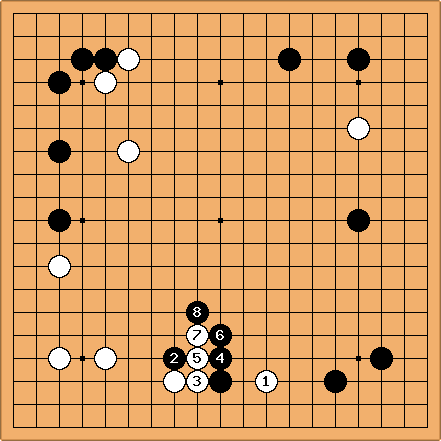 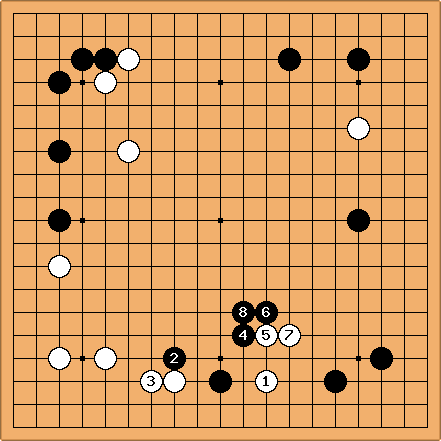 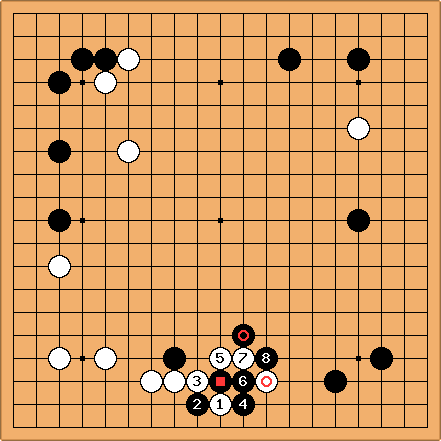 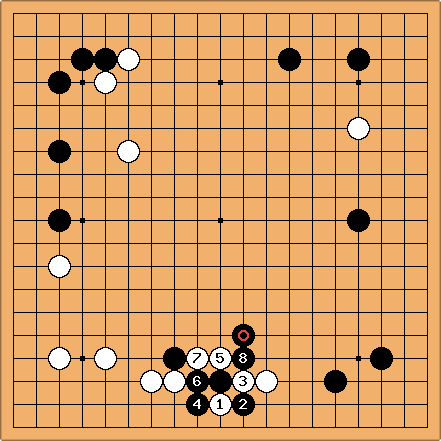 Bill: However, this hane,

aLegendWai: But will the B group underneath die?

Bill: Not with the threats against 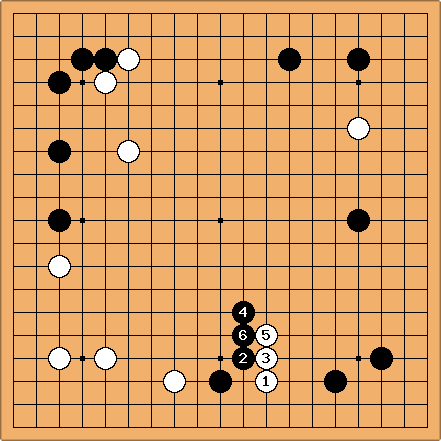 unkx80: The first moves that comes to my mind are

. Is this too passive for Black?

Andy: I would also appreciate some comments on this sequence.

bud1027 I think so. A loose attack. I think this is a bad result for black. At least not so satisfactory result. The reasons are as follows. 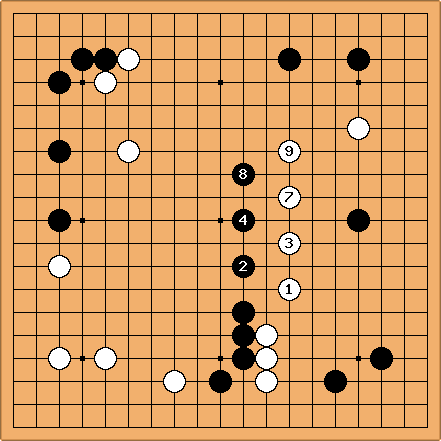 This result is most common and normal variation after your moves. ( of course, this is NOT the only variation expected. just one of variation, but this is a normal and common result)

Let's look at this closely.

1. White is jumping into center lightly and easily. black can never hope any effective attack on them.

In conclusion, black is losing more than his gaining.

This is my thought.

aLegendWai: I wonder if it is a wishful thinking. At least B should try to cap in the meantime when W escapes. So this will give pressure to both the upper W stone and the escaping group. (NB: Although the sandwiched B group will be under pressure too. It still has escape route). That's my little idea. 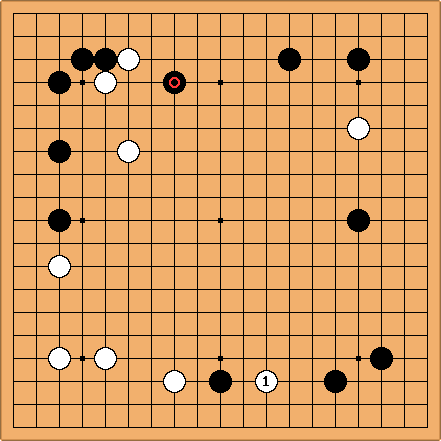 I don't think 1 is that important, surely the stone is ajisome enough to demand a tenuki and an attack on the biggest area left? 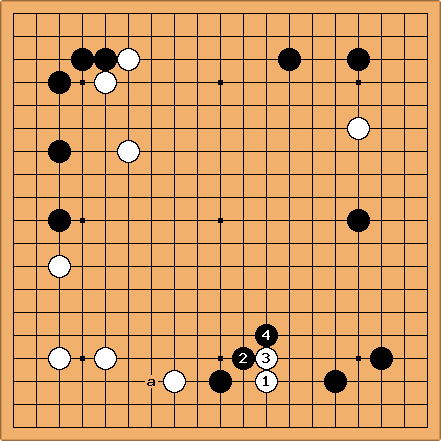 Klaus: I tried to understand the comments on this page. Thanks for all the interesting stuff!! Actually I liked the probe suggestion best, I always tend to miss moves like this.

Maybe Chris Hayashida's suggestion was the most important: black is weaker than white, locally, so he shouldn't expect too much from this fight. Here I what I tried in the game, maybe it is just pushing white in the wrong direction, and maybe it is an overplay anyway. (the game is still running, so I can't present the rest of the moves, because I don't want to discuss a position which has a direct effect on my moves.)