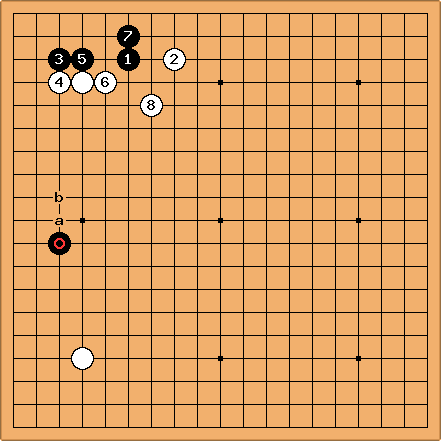 While playing on wBaduk, I encountered this stratagey where W deliberately plays this one-space pincer joseki even without a support stone around 4-10. This seems to provoke a fight, urging B into the middle, which when I did at the marked stone, ended up sourly, as W has the advantage in the fight. Is there any good way to approach this? I know that it is too good to let W have the whole side. 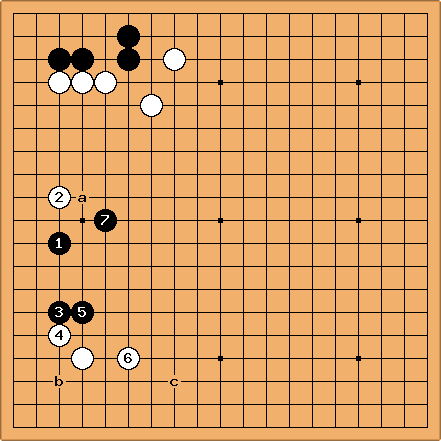 Dave: Usually I agree with unkx80 but here I think that White is not "comfortable". Up to

(or a) White is overconcentrated in the upper left and Black is still looking forward to b, c, etc. on the bottom.

hits the right balance between the White wall at the top and the single stone at hoshi on the bottom. 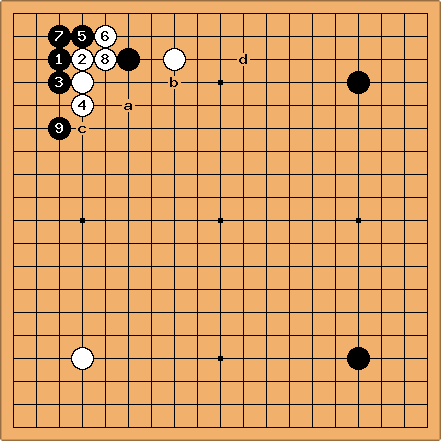 Dieter: Can you explain why the first diagram would be more interesting than this one? White has sente and no bad stone has been played yet.

Velobici: Two things, it seems. First, it appears that

hurts the lower left White hoshi stones. Second, if the pincer was the one-space high pincer, then it seems that its the wrong direction of play. In support of the second idea there is the following quote from Essential Joseki. 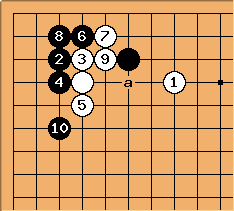 Essential Joseki:Diagram 10 (Contradiction). Blocking on this side with

is a big mistake in direction. When black jumps out to

, his corner is very big. According to theory, White should make a defensive move at a, but that makes her overconcentrated; if she does not defend, then her shape is not quite clean. So there is some contradiction in white's plans. .

Bill: I have several volumes of Go Seigen's set, 21st Century Go. I spent some time this morning looking for the Dieter's suggestion diagram (one-space low pincer). I found several modern pro games where White had made the one space pincer when there was no White stone on the left side. In no case, however, did Black jump into the corner in reply. The most popular response was the one space jump at a, followed by the attachment at b, and, in one case, the double approach at c. If both blocks for White (

Finally I found the Dieter's suggestion diagram in a commentary (vol. 9, p. 73). Go Seigen comments that

was played before the komi era. However, after the joseki up to

, Black is thin by comparison to White (obviously he means overall, as Black's corner is solid), and with her outside influence White has possibilities.

dnerra: I was very surprised by these statements. In my recollection, jumping into the corner is by far the most common response to the one-space low pincer. In fact, a gobase.org search for this exact fullboard position agreed with this (100 games, 50 invasions at 3-3, 20 jumps to a, 11 double kakaris, and the rest mostly tenukis.

Dear kyus, don't let yourself be confused: Jumping into the corner after the one space low pincer is never wrong. (Pardon Bill for putting my disagreement into this populistic tone :)

Bill: dnerra, were all of those games komi games? Go Seigen's remarks apply only to them. Which suggests that any disadvantage to Black is less than komi.

dnerra: Bill, I didn't check, but I would be very surprised if there were many non-komi games in there at all. This joseki has been possibly _the_ most frequent pro joseki in recent years (and how many non-komi games start with 4 stones on hoshi?) It is consisten with a territorial style for both sides.

JuhoP: There is nothing wrong with Dieter's suggestion above. GoGoD has 268 pro games where white plays the one space low pincer in this exact situation. Black goes into the corner in 121 cases, making it the most common continuation. In every case white blocks from the upper side and the play continues exactly like in Dieter's diagram above. The 'Essential Joseki' comments on page 166 are about the one space high pincer, and the 'diagram 10' above is different from the one in the book (means that it was, before it was corrected).

Bill: When I was learning go, the joseki in Dieter's suggestion was considered not so good for White. Expert opinion seems to have changed.

Petri I think this has been made popular by some Korean players. After joseki instead of playing hane on top of kakari stone W could make a 2 space extension from pincer stone. I've seen that quite many times. But question was what to do if W blocks on the other side? Splitting must be the correct play. If it leads to problems it is not fault of the splitting play but the way splitting play is defended later on. W has bad aji on cut between 8 and 2 so I think B has good prospetcs.

Calvin: Indeed. At the U.S. Congress this year, a Korean pro cited the pattern in Dieter's suggestion as an example of something that used to be thought to be not so good for white, but now is considered a reasonable jungsuk for both.