Recently I've been playing orthogonal komoku a lot as black. It's quite a nice fuseki, but I have a question: 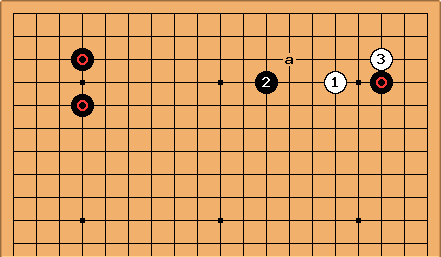 is pretty standard as far as pro games go and is common in my games also. In response, I tend to play

(or a with about equal frequency).

My question is about the inside attachment 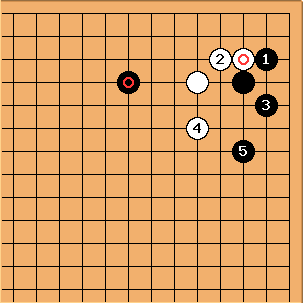 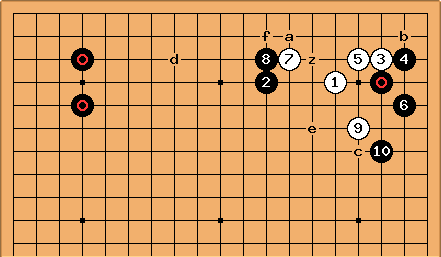 However in my games, this sort of thing comes up a lot.

If I block with

puts unpleasant pressure on my right hand group, but ignoring

to play on the right seems to be the wrong direction of play.

So am I doing something wrong here?

I don't expect to blow white out of the water but I don't feel really comfortable as black. Am I missing something?

Alex Weldon: Looks fine for Black to me. Being able to exchange

is probably a bit better for White than the more common version you give above, but

looks like a local loss for White. Black has plenty to aim for; a or b to take away a base, c if the right side becomes important, d to make a base for the two-stone wall and a very solid (though perhaps overconcentrated) framework on the top. The point e, though a bit strange-looking, is probably also intersting, as it forms the ear-cleaning tesuji with the marked stone and helps build a large-scale moyo in the upper left. I'd be happy with this, as Black.

Dieter: White is on the defense here, and playing a keima at

generally is worse than ikken-tobi under those circumstances. The difference is not bound to pay off immediately, though and anyway such general principles should be applied with caution.

However the big gain for Black here comes from the

exchange. White doesn't really gain much strength from it but does take away a lot of options, such as sliding under at f or attaching at

. The iron pillar of

puts on the black one.

Bill: White is horribly cramped. Black has managed to get both territory and thickness. Besides, Black threatens z. Who could ask for more? :-)