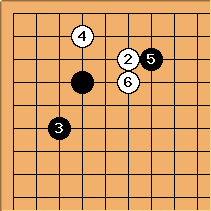 is supposed to be joseki, but how is Black going to answer 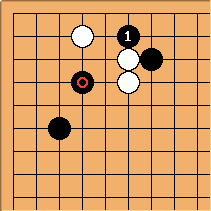 creates a cutting point with 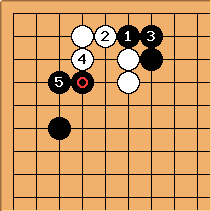 PurpleHaze: I'm not so sure about that cut... 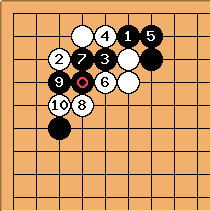 . I don't think Dieter meant that Black should cut immediately.

has to be played at

is not meant to cut immediately, but it is good enough to spoil White's shape. See my comment at the (provisional) end of this page. 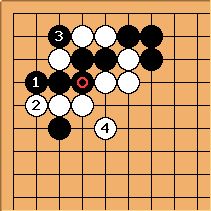 work here? It looks to me like the black stones die, but I might be misreading something.

PurpleHaze: Oops, you're right. Teach me to read it all in my head and not look at the diagram. How about... 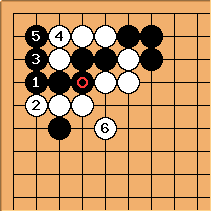 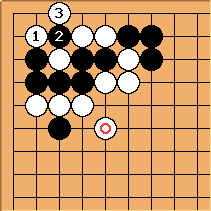 unkx80: White should play at

directly, and leave the nasty ko in this diagram for a suitable time later. 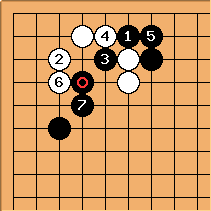 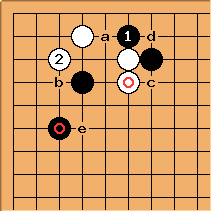 I think both Black a and Black b lead to a good result for him.

DJ: I like Black b very much. I (for what is worth) play this joseki quite often, if only to surprise my opponent... ;-)

is a wrong answer, as it lets Black spoil White's shape by playing 1. The hane below, at d is even worse, as will let Black force White very low by cross-cutting.
Correct answer is the hane on top at c: it works here, and it works even better if Black had played at e instead of

: in such case there is a ladder that has to be good for Black if he wants to play this joseki.
This move was invented and thoroughly studied by the Koreans. The idea, somewhat greedy, is for Black to be able to play on both sides...
One has to be careful on what lies ahead on the TS and the LS, and in my experience (again, FWIW) it is playable as Black when you play the keima in answer to the kakari: you don't have to worry about ladders and you end up with small groups everywhere, but usually they are safe enough...
If White goes wrong and play

, she will find herself with bad shape and a group playing often on dame points...
You can find a thourough treatment by O Meien (if I remember correctly - I'll check when at home) on two past issues of GoWorld.
Try this move and have fun!