Klaus: Some time ago, I started to use a new board size: 7x7!

It is fun to play, and one can learn a lot about tesuji like the Two-stone edge squeeze. Carelessly losing 2 points in yose will cause disaster and a lot of reading is required to handle this size.

An interesting varation is to deny Black to play in the center with his first move. 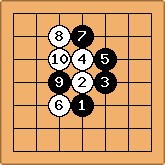 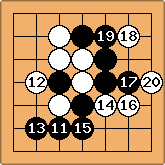 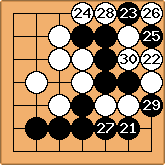 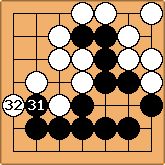 ilan: Actually, the komi is kind of low. Where's my COFFEE!?

Bill: Hmmm. Looks like the game losing move was

Bill: You mean as in this diagram? 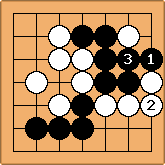 ilan: Well, I will try this out. Let's see how many mistakes I make... First, I note that Black has much fewer liberties than White on the bottom, so cannot even make seki if it is his move, assuming the top stays as it is. In particular, White has no ko threats against the bottom Black group, so has no ko threats at all if a ko develops on top. So, it is a direct capturing race between the two right hand groups, which both have 3 liberties. Black is threatening to live if it is his move, so White has to do something, and I don't see a way for White to win the capturing race, this being my best effort. 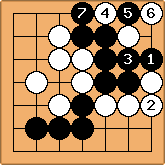 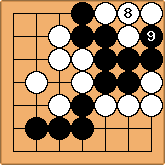 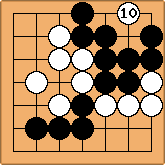 It seems to me that White can escape with some of this stones as follows: 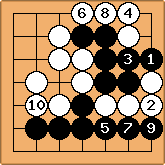 It seems White will win by .5, if Black and White had an equal number of prisoners prior to the part I analysed. 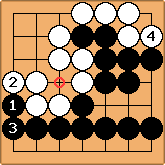 Bill: Nice. :-) Actually, White has captured a stone on

Robert Pauli: Black's right track of course is as "I don't know" Bill suggested, with the obvious continuation: 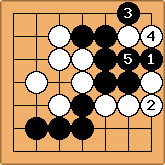 White will now certainly lose, but he can keep his loss below five points (remember, one black stone was captured and komi is 6.5). Do you see how?