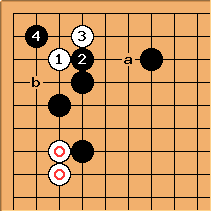 Tapir: Maybe white should play lightly now, and gain something with moves like a next.

is a big overplay. White shouldn't expect to achieve anything good this way.

Tapir: But don't people say, that only the enclosure with the simple knight's jump at a instead of the large one and a kosumi is safe from the 3-3 invasion? However what may happen now after white a looks complicated (possibly crosscut). In the game (i was black) I wasn't confident whether the result favours me at all. Basically White got

in sente - Black was strong before and only defended territory. While the White group was much stronger after the exchange, and endgamewise

are large as well.

xela: Do they really say that? I haven't heard it before. Anyway, comparing these three pages -- 4435 enclosure, FightingKoTheBook#diag1, 3-3 Point Method Dictionary -- it looks as though the result depends a lot on context. I'm guessing now that

might have been better at b. It would be nice to see more of the board, to judge how upset white will be if the 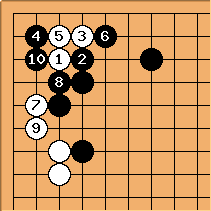 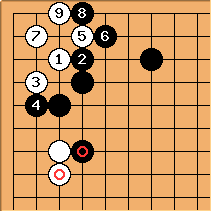 Tapir: At least without the

exchange earlier allowing a ko might even be better for black. 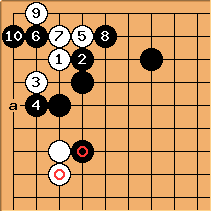 Tapir: Though without the

exchange the damage to the white formation on the left can be quite big.