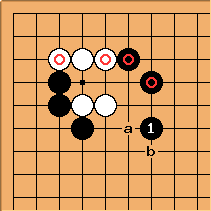 This position can be reached in two ways:

Which reverse the order of the

stones to get to this position

Until 1963, a was the common way to continue after

. But in 1963, Fujisawa Hideyuki found the tesuji b, which has been the common way to play since then. 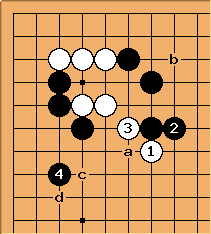 is a famous use of the Grappling hook tesuji [1]. After

, black can defend on the left with

or a point near it (c or d). White can now choose to defend the cut a or perhaps to attack with b, but can also play tenuki.

White should keep in mind that the corner is not yet alive, so if this group is sealed in, white needs a move to live. 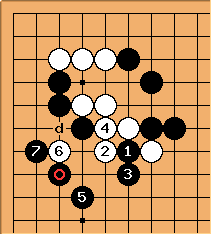 After a white tenuki, the follow-up looks like this (assuming black played

White can play tenuki again, because she can always get an eye at d if she so wishes, so the corner is not at risk.

What if black cuts? 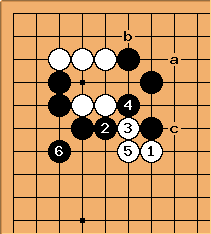 Dieter: I'm afraid we cannot call it a famous tesuji without exploring it. What happens next?

Herman: Ishida calls this a possibility ("black resists strongly"), but says that black is rarely able to play this way, because the atari at c is too painful.

fractic: Kogo's joseki dictionary paints a different picture. White's corner isn't alive yet so she doesn't have time to atari at c. Instead of

and goes on to show that black can't resist with

so that it just reverts to joseki with a different move order. Then again Kogo isn't allways right and it admits that it isn't sure about the punishment of

Herman: In reponse to this: A search in GoGoD shows that

first has not been played since 1962, all games from 1963 onwards have 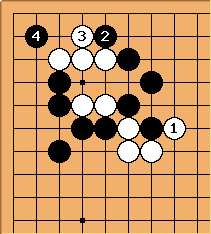 kill the corner. In fact Kogo goes as far to say that the original tesuji is disadvantagous because of this. 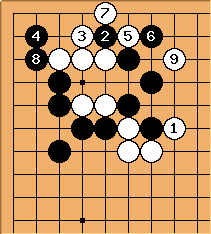 Herman: Seems to me black may be in trouble after

fractic: This does indeed look very troublesome for black. Looks like Black can indeed only cut if he can tolerate the atari.

Bob McGuigan: Ishida says that Black has to have some strength to the right to push and cut. 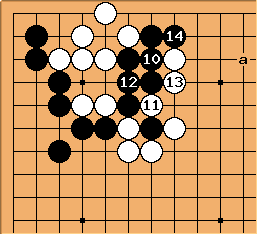 Herman: Seems that the only realistic chance here is if black can escape with

, which is probably what Ishida means when he talks about black being strong to the right.

tderz: Black wouldn't like to give White a ponnuki and then die (as it seems here - if not black stones as near as a present).

Herman: Exactly, so the only time black can play like this is if he can escape and kill the corner. That's worth a ponnuki :-) tderz: It should be noted that the position of

here is changed with regard to the first diagram.
This has an important impact on less Black weaknesses to exploit for White.

This example shows it: 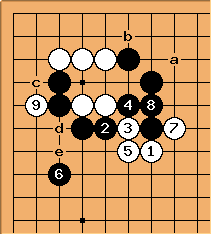 changed to the position of the other diagrams ...
and tesuji

makes miai of c and cut d.
This illustrates the disadvantages of 'banging-ones-head-of-two-stone'

.
It really needs a continuation of

Variations after the cut 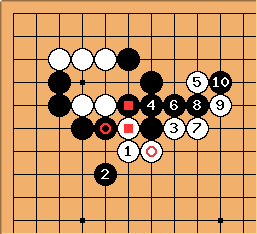 tderz: this is from a professional game: " 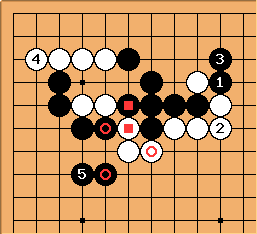 cannot be omitted" (cf. with above TsumeGo diagrams) 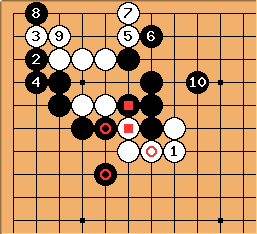 seems like forcing a ko on White, but she has

in the continuation diagram below. 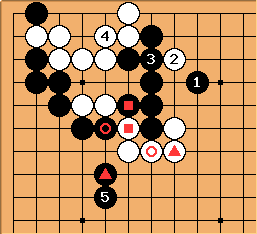 tderz: "White can connect at

Double peep instead of cut 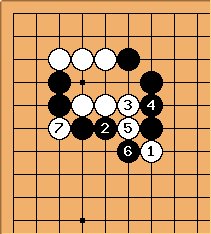 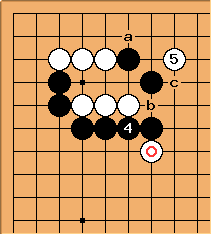 Dieter: With this variation?

Herman This look too good for black.

is now a wasted move, and black can continue with c and seal white in completely.

Killing sequence if sealed in 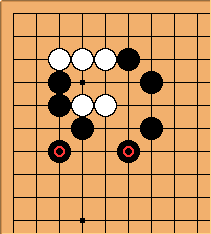 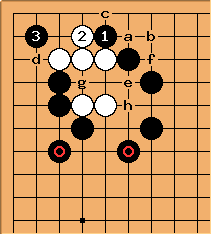 is a known miaoshou.
The points a and d are now miai and White is dead. 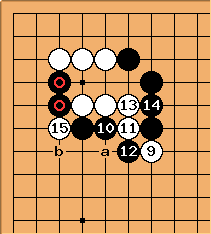 Andy Pierce: Can black play this way with the idea of sealing white into the corner, sacrificing

, white threatens double atari at a, so black cannot play b. Which would meanthat white can move along the side there.

[1] xela: not sure why this tesuji is called "famous", but a similar shape can be seen at 4-5 point 4-3 approach inside contact, follow-ups

Herman: Ishida calls this the "well-known tesuji" in his Dictionary of Basic Joseki. I've seen Alexandre Dinerchtein call this the "famous tesuji" in a game review.