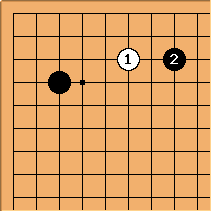 plays a pincer. White has prepared for that -

is played to have a good option towards the corner in this case. Nevertheless, if Black wants to build influence towards the upper side, 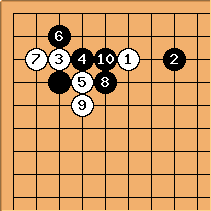 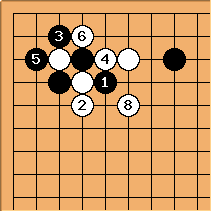 in the previous diagram is important. If Black plays the atari at

here first, White has the option of answering

. Usually this is better for White than the joseki. If Black chooses the correct line of play, White has no alternative. 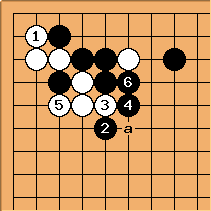 The standard variation continues with

, White gets a solid group and Black builds thickness.

can be played at a instead, but that does leave bad aji and is now infrequent in pro games. 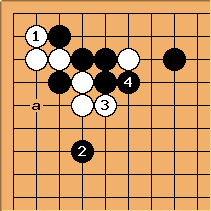 SnotNose Here is another possibility, though I'm not sure what the proper continuation is.

natural. It looks like white has bad aji here unless he plays at or around a next. Perhaps I haven't got 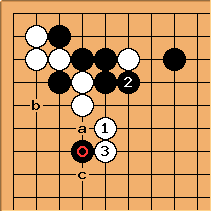 Charles From the point of view of basic suji,

is the previous diagram is worse than

here, in reply to

SnotNose It still seems that white has bad aji at a and, so, may need a protective move at or around b or c at some point. 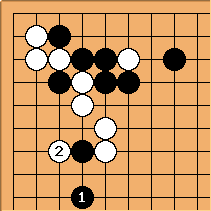 Charles This is the most usual finish to the joseki.

One should consider that

(of the Yup diagram) will probably be played, anyway.

Having written that, I then found that the first diagram line is known in pro games - even recently - when White wants to push on up into the centre. So, it could be joseki, too: but less common. 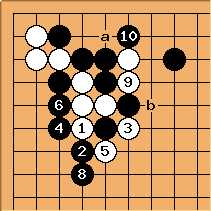 looks logical, but in the sequence to

, killing the corner with a and attacking in the center with b are miai for Black. 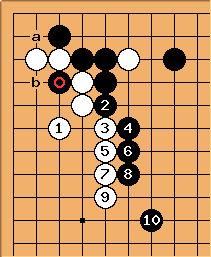 If White is willing to give something up in the corner, so as notto be enclosed, she can play at

. Black can exchange Black a for White b in sente, but usually he will not do so, because the marked stone still has a lot of aji (Black b creates a ko, for example). More usually, Black either plays tenuki or pushes up with 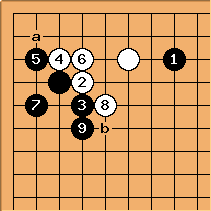 Alternatively, White can play at

. Pressing against the black stone in the corner, she strengthens it, but also strengthens her own stones. After

, the joseki continues with White a or b. Compared to the previous joseki, we get a reversal, with White facing the top and Black the left side. 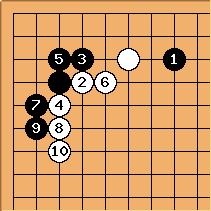 here. Black now takes the corner, giving White the outside.

White can also cut, with

: this leads to a transposition to the joseki above. 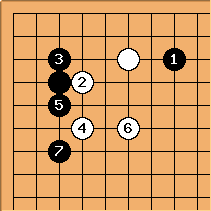 [1] An example is at enclosure opening distant low approach, pincer.