2-4 Probe against a low corner enclosure 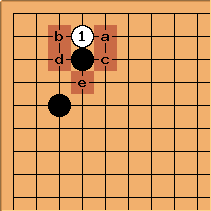 probes against the low corner enclosure. His intention is usually to stop black from making territory in front of his shimari. Because the corner starts out as black territory, white has to play light and flexible. His stones will often end up being light or even downright sacrificed.

Local answers are hane at the outside (a) or inside (b), or stretch at the ouside (c) or inside (d). Finally the extension at e, though less common, is also played enough to be considered joseki. 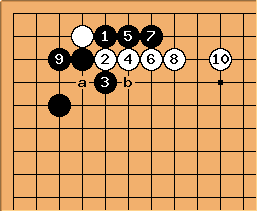 If black blocks on the outside with

, white will play the crosscut of

. Although books tend to focus on another variation (see below),

is by far the most common move for black. In this very standard sequence, black secures the corner territory, while white moves away to get some breathing space. The sequence from

is quite straightforward, though white might try a or b instead of 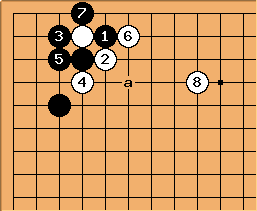 The move most often shown in the books is

. In professional play it is not non-existent, but it is rare, being too territory-oriented and foregoing a chance to put pressure on white.

, it would be a mistake for white to play at a though. As they stand, white's stones are light and easily discarded, but playing

at a makes them heavy. Instead, white should jump out lightly, for example at

(the exact location depends on the position) or even play tenuki. White should treat his stones at

very lightly. Black has answered them on the inside, so they are easily sacrificed. 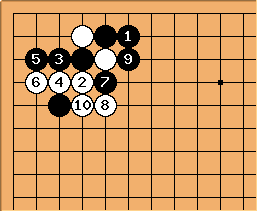 There are two more possible continuations for black.

leads to an exchange, where black takes the position at the top that white was trying to avoid, but at the cost of not only giving white the left side, but also losing some of the corner territory. 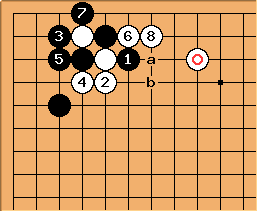 is usual when the white stone at

is present. After the usual move

or an immediate atari at

ends up in a useful position. The exchange of

immediately, then plays atari at

-tenuki, white will probably play at a, not at 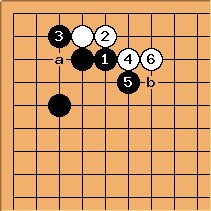 and a. In both cases black still can choose between the corner and the outside. With

, black takes the corner. The sequence continues to

or b. The continuation after that depends on the surrounding situation. 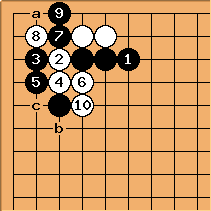 may be due to Shimamura Toshihiro in a 1950 Oteai game against Takagawa. This sequence occurs in the 1971 Honinbo Tournament book, with the attribution to him (but no game reference).

The idea is that White cannot now live in the corner. The stone

is not for taking. 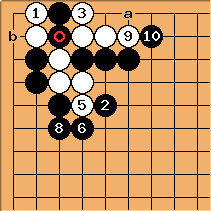 , the white corner group is dead. 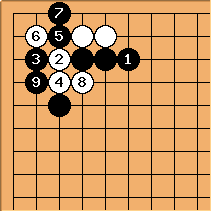 A more modern variation (I see no occurences before 2010, but it has become the more usual move since then) is for black to play

. There must be a reason for this move, but I don't see it. If white plays

here, the variation converts to the previous one, so my feeling is that black is only giving white extra options. 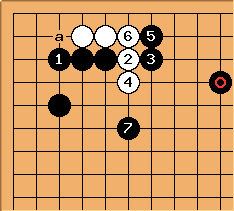 instead of a looks like a quiet, submissive move. But in this case, at least if there is a stone at

or around that spot, looks are deceptive. Black is just avoiding any weaknesses in his position, so that he can all the more forcefully attack white with

and the following moves. 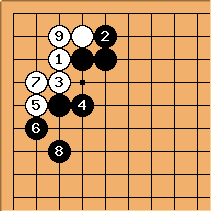 , white will get the corner (see for an exception further down, however). White lives comfortably in the corner, but black gets outside strength in all directions. 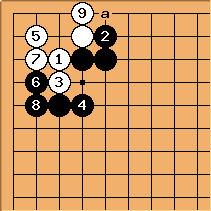 If white does not want to provoke

in the previous diagram, he can also live with

here. Note that after 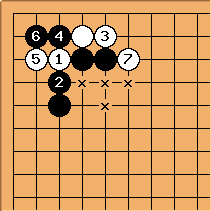 If black blocks with

, the aji of the white stones in the corner give his an advantage in the fight at the top by making any of the points marked x his sente. 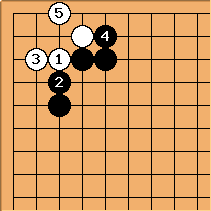 here, after which he lives by creating a tripod group. This is however more a joseki for books and amateurs. Professionals tend to play this way only when there is not enough room to live on the upper side. 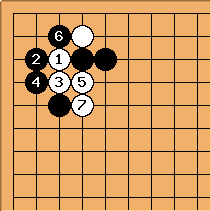 is another book move that is more usual among amateurs than among professionals. The idea behind this move is that the white group is left out into the center, but there will be heavily attacked or even killed.

In professional play, the more usual way to get a similar result would be

here. Again white cannot live in the corner, and is facing a tough fight in the center. 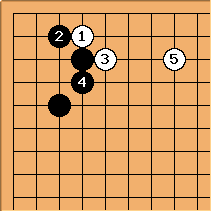 chooses to protect the corner. White forces once more with

, then lightly jumps out with

or some such point. White could also play around

or even play tenuki immediately, satisfied with having

around for future use. 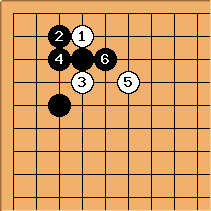 Another continuation for White is the clamp at

. In Strategic Concepts of Go Nagahara analyzes the result of the joseki in this diagram. By removing the stones at

, Nagahara shows by tewari analysis that Black has played at

in answer to White's probe at

- an unfavorable exchange (in the position shown in the book). 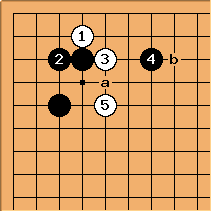 is a common answer to

when Black wants to give White as little help settling his stone as possible. This leaves White with few forcing moves. If Black has a strong position in the middle of the upper side this can lead to a strong attack on

. A standard response by White is a hane at

. Black will then usually pincer at

(if he doesn't already have a strong stone in that area) or play on top at a. If the attack in this diagram is too powerful, white should play more lightly with a move around b instead of 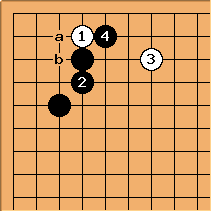 has the same intention as a, giving white as little help as possible in settling his stone. White will usually jump out with a move like

immediately), black's answer depends on the position on the top and exactly which move white has chosen.

is an important point for both. If white plays it, black has to answer at a, because giving white living stones at both the top and the corner is a clear loss for black. Still white is often not in a hurry to play it, hoping to get a chance to play immediately in the corner at a or b, so black might be able to play

even though for him it is gote.