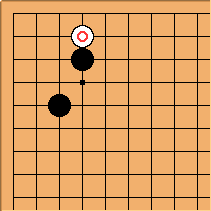 First off, in the first diagram, the probe has to be timed, it has to be a big enough move at the given time to make black have to respond to it, otherwise black can simply ignore the move and tenuki, also you have to play it early on, otherwise later in the game it might not work anymore because the board position will have changed...black might choose a different move which would kill that entire probing area outright, so you do it early on and now (as suggested in Strategic Concepts of Go by Nagahara? he refers to something confusing like "an asking move in order to force your opponent to choose between several options and fix his shape which you would then determine your future strategy on).

A much better pro explanation is found in the book Vital Points of Go by Takagawa Kaku and the book review suggests that the book is quite mystifying, but it directly gives the appropriate label as to the nature of the probe. In reality, it can be formulated quite easily. This book also seems to explain many other mystifying subjects such as tewari, or a clearly dogmatic page on "opening theory". But, it is not mystifying once you understand how it works.

You do it early on and now: you are then able to edge in an additional stone in that area in order to leave aji there and potential to do something with it later on which would not have otherwise been there in the first place, but if you do it later on in the game it might not work anymore because the board position will have changed and black can choose a move that would outright kill the entire probing area...also you can just leave that probe hanging and the opponent will already have "fixed his shape" in a manner that gives you the opportunity to do something with the probe later on because you have left that aji in there for the time being, if you hadn't left that aji in there early on and forced your opponent to fix his shape in such a manner, he would kill it outright in the future when the board position changes and he would no longer have to choose between the 4 options listed in the diagrams above to deal with your probe...

Now, the various positions below the first diagram are just things you can do with that additional aji you left in with the probe, all of which leads to success for white, because if black for instance chooses to stop you from making life in the corner, you would just take the outside and make sabaki, or in other words play flexible moves in order to make life on the side, which would devastate black anyway (or play two moves to generate some thickness on the side and just leave it there and tenuki), so if black chooses to protect the side instead, you just leave the corner hanging for now because it's too small at the moment and come back to it later to make life, or force black to have to spend an additional move there later on to protect...this is in general how the probe works at a more practical explanatory level. The high dans use this shimari probe all the time.

My comments actually reveal a comprehensive inner working of the probe, they are not just about probe timing. If you were to look more closely at my comments you'll see how the probe can be quite mysterious in the way it works in how it has to do with being able to generate aji (such as in enemy territory) before the board position has changed. When the board position changes the opponent can destroy your probing stone with an entirely different response. Though, if before you were to play it before the board position had changed to a level where your probing stone would be destroyed outright, it would be able to leave aji and make your opponent settle for a lesser counter-response. The probing stone will have been successful then because the aji can be used now or in the future. You wouldn't be able to leave aji there if the board position changes later on, as the opponent would choose a different counter-move. The aji left behind leaves many additional choices now or for later on in the game. My comments apply to probes in general as well as a level of strategy that can be applied to any move in the game in general.

"The probe is the essence of how, in feeling, there is the addition of a 3rd dimension in reading variations, despite the common feeling that it is only move followed by counter-move."

The technique of invoking a response from the opponent: Placing the first move down in the correct order, in order to invoke a response from the opponent such that he has to defend in the opposite direction before you place your 2nd intended move makes your plan succeed. If you had placed the 2nd move first instead of the first (reversing the order wrongly), then perhaps the opponent, for example would pincer you and now you would not even be able to follow up with the 2nd move as intended. I am too tired to spell it out, but the general idea is you play an ordinary knight's move approach to the opponent's 4-4 stone to invoke his knight's move corner defense in the opposite direction before you go back with your 2nd move to establish a base (2-space extension) directly next to your opponent's squeezing stone. If you had played the 2nd move first, the opponent would obviously pincer you from his 4-4 stone and now you cannot even set up a base. This is an advanced method following the same line of thought as the probe.

The probe is not only applicable globally. For I have also discovered for myself many probes in local positions as well as even in running fights. But as another high dan pointed out, usually you have to compare a local shape move with a local probe, as playing a simple shape move usually works better.

--edit: Turns out I have an inaccuracy in my understanding here. The probe is indeed merely an asking move in that it follows from the ability to place an additional stone in a local area to create aji. This stone is usually a forcing move and it's played in an area that already belongs to the opponent or it simply would not benefit the opponent much locally, and he'd have to respond to it. The probe is a simple extension of this idea and allows/forces the opponent to choose between multiple branches instead of it being a plain forcing move that an opponent has to respond to which adds aji to an area. Please see my other page "Archaic/CreatingPotentialByAddingStonesToAnArea" for more info.