The current name of this tesuji, Hazama Tsuke Tesuji, was made up by me, Herman. It is not an official term, and has no basis in any knowledge of Japanese on my part. It is simple a contraction of Hazama tobi and Tsuke. As John F. has pointed out, the term may confuse Japanese readers, as it is similar to "Hazama wo Tsuku", playing in the middle of an hazama (-tobi).

So perhaps another name is needed. Suggestions are welcome. Some suggestions:

How about the "poisoned cut" tesuji? This is a nod to the "poisoned pawn" in chess, where you put out a tempting looking move for your opponent (cutting between two stones, or capturing the pawn) that comes out badly for the opponent if they give in to the temptation.

I like that, that a nice fancy name, but I would prefer "poisoned hazama" then, to indicate the shape. Poisoned cut could refer to any cut. :-)

The only problem I see with this is that "poisoned hazama" can also refer to situations where the hazama move is not an attachment. In the joseki on the Diagonal Jump page, for example, the play at the cutting point of the hazama is similarly bad. In fact, I think most times when professionals play the hazama, it is when the obvious weakness in it is in fact a bad move.

Hmm, thinking more about this, I think that "poisoned cut" could be an incredibly useful term to descibe any situation where a player leaves an obvious defect that looks attractive but actually isn't. A kind of trap, if you will.

For me the most striking part of the tesuji isn't the fact that it's a diagonal jump but an attachment at the back of the opponents stone. How about (diagonal) back attachment? Could also be a bit more general. 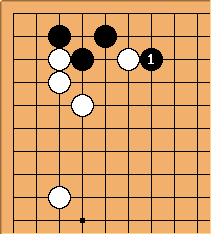 This is a quite similar tesuji. Grappling hook is also a fun name but not very descriptive.

Yes, this 1 is quite similar, I think. The amazing part (and what makes it "tesuji") is that it is a seemingly bad move, allowing the opponent to split, but has a good followup to make up for that.

Any name involving "diagonal" should also include "jump" to differentiate from the kosumi. Such names are easy, but perhaps a bit boring :-)

A non jump diagonal back attachment would just be a hane no?

Elephant jump but under other stone. The choice the opponent is faced with is a tickler.

Usually, the move is on top of another stone, I think. But other than that, cool name :-)