Okay, I was facing this layout on the goban, I think I was playing OK up to this point, but I'm not sure... anyhow, I'm playing White, and I have a 7 point reverse komi (and four stone) handicap.

What to do at this point, for best effect? (Not just for the win, but for the best result!) 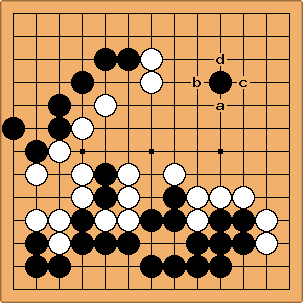 White (me) to play next, now what? I'd say that the top right is an obvious choice, with that much support, is it possible to kill off the solitary black stone and take the corner and center for myself? Or would I have to make a choice? Is there a sneaky trap which might wind me up with both? I went with a, and thought of b, c, d, as I thought that my advantage would be to have an all out shoving match. 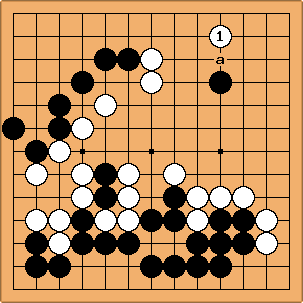 A play like White 1 here is usually best. It now becomes harder for Black to find eyes in the corner.

Jasonred Question, if Black plays at a next, doesn't it degenerate into a pushing match anyhow? Cause Black's defending that area now? 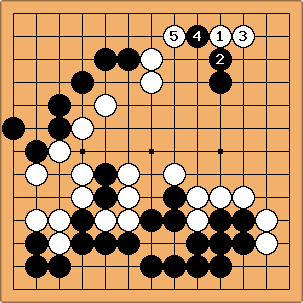 Charles White plays 3, and then White 5 takes care of Black 4. White would be more concerned about Black 4 at 5 (next diagram). 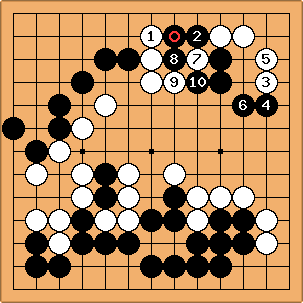 So if Black does make the marked play, White may be cut off in the corner. Black 4 is good. White sacrifices 7 to make a false eye. 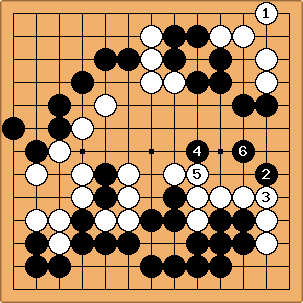 If it gets this far, Black has at least succeeded in setting White an interesting life-and-death question, which you might want to consider.

Even on a small board, there are too many variations for exhaustive analysis. 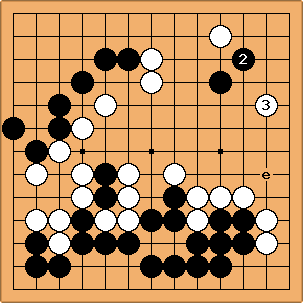 If Black 2, White 3 probably gives Black only room to make an L-group, which is dead. However, White has to be worried about the weakness on the right side - Black peeping at e. But for that, I'd be quite confident of killing Black here. 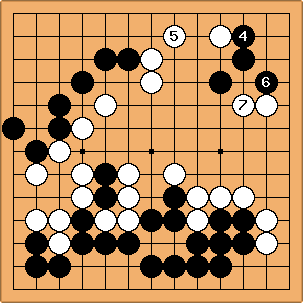 For example if this happens, Black has (worse than) the L-group in the corner and no serious chances in the centre. 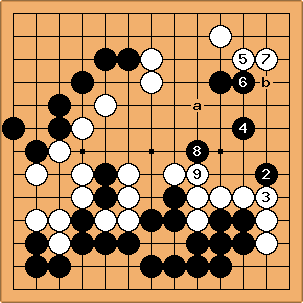 Black should make it tougher for White, using the peeps at 2 and 8. This probably fails, but offers more prospects.

Jasonred Thanks man... but, this situation here scares me! I wouldn't know what to do at all from this point, as now Black ACTUALLY HAS A MOYO, and I have to invade and kill it... the thought that Black might play at a or b next scares me even more...

(Charles I'll give some /Variations.)

Looks like White was too passive with 3. You do not always have to connect against the peep. In this position, White is strong, so resist. Besides, if Black cuts directly (instead of peeping against the cut), Black easily dies. The same is true if White resists the peep. 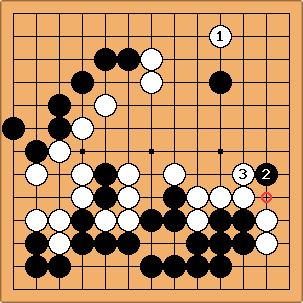 The circle point is the cutting point.

If Black insists on the cut... 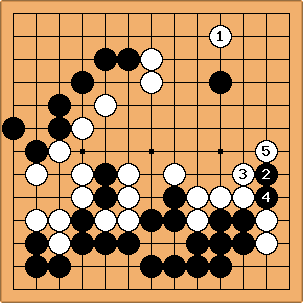 White 5 is an easy way to kill the two black stones. 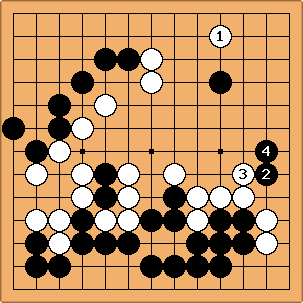 If Black runs to make eye space, he has a long way to go. See SixDieButEightLive for details.

Of course at some point, Black has enough liberties to make the cut feasible. 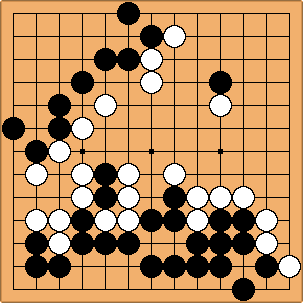 Hey, I'm weak, so, for such a ridiculous handicap, you can guess how weak my opponent was, right?