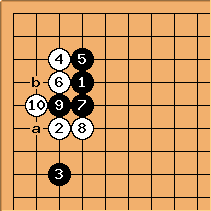 xela: I thought this was an old joseki, not actually a mistake by white.

Bill: The Suzuki-Kitani Small Joseki Dictionary says that it is good for Black. (Black continues with b.) 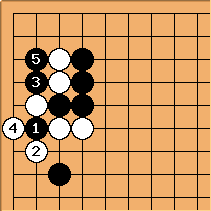 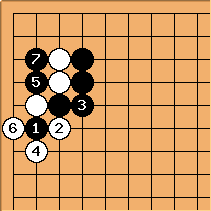 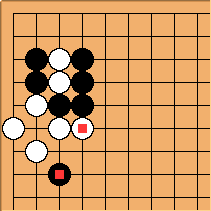 please fix any mispels or mistakes you see 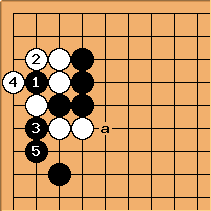 can be played at a instead -- see 4-4 point one-space low pincer invasion, block 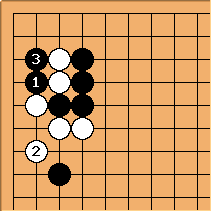 Tapir: Looking at this variants b seems better than a. Since white has no ponnuki and a group without (secure) eyes either way. (I'm 3k KGS as well.)

Bob McGuigan: These analyses don't seem to be tewari in accord with the description on the main page. The reasoning doesn't involve removing stones or reordering moves. This is just ordinary analysis, the main point being that a sequence of moves is bad because it leaves a stone badly placed.

unkx80: It is easy to turn this into a tewari in the true sense of the word.

Bob: Yes. My comment referred to the original presentation, which was not tewari.

Why is this sequence bad for Black? 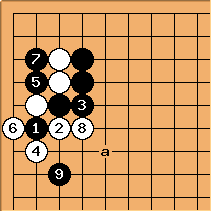 is a standard joseki, so the result should be roughly even for both players. However, when

is a bad move which leads to a misplaced stone. But the position after

is normal. Many people are tempted to play a, but

is usually better. See next diagram 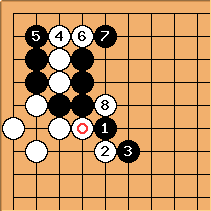 from this position is generally better than playing the keima at

. In this position, after

, but can't because of the sequence shown. 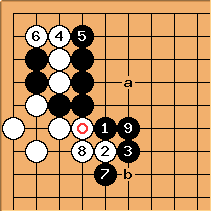 Dieter: Just to dwell on, I guess this side stepping by Black does not really produce a good result, leaving weaknesses at a and b in gote.

Herman Hiddema: Yes, especially as black usually chooses the original joseki here (double hane after the 3-3 invasion) when a wall facing the top side is not very valuable, opting instead to take points in the corner.

is the normal move? (And not, perhaps, a play that occurs only under special conditions, and is normally inferior?) Where is the evidence?

Herman Hiddema: I've played the keima, only to be criticized by Guo Juan, who explained that

is the correct move. Searching GoGoD for the next white move in this position yields:

And it should be noted that usually, when white stretches into the corner, this usually involves a strategy where

is played soon anyway. (Eg: In the tight search, after the stretch, the usual response for black is 2-2 (54 times), after which the most common followup by white is

(10 times, with bending on the second line coming second at 5 times)

on the diagram on the right? A quick scan at the results of a GoBase search indicates that

is far more common than the keima at a. It is also very common for

to be played elsewhere instead.

. It was not my intention to imply that this move should take precedence over tenuki, only that it is the normal move in the local context, and better than the keima under normal circumstances.

Bill: I thought you were talking about

in the original diagram, not

in the later diagram. Glad to have that cleared up. ;)

Herman Hiddema: Ah, ok. No, that one is indeed not the normal move :)