Konrad (1d): If you are weaker than 5 dan it really doesn't matter which approach you choose, from a practical perspective anyway.

Alex: It's too early in the morning for me to think about the tactical variations on the rest of the page, but I had to comment about this statement. I always bristle when I hear such things, because I believe them to be dangerous and wrong.

It's never too early to start thinking about fuseki, even if the players are weak enough that everything seems to be decided in the middlegame. I'm not really convinced that an advantage in fuseki is really "lost in the noise" of the middlegame in a kyu-level game (I believe that an advantage in fuseki will lead to some sort of statistical advantage in those random fluctuations), but even if getting a good fuseki had no effect on one's chances to win, I'd still consider it worth thinking about, because to ignore it early on will hinder one's chances for improvement later.

The attitude expressed by Konrad is a common one - all too common, in my opinion. I believe it to be part of the reason that most shodans - who are supposed to have a good grasp of the fundamentals of the game - still play abysmally in the fuseki.

In any case, all that aside and speaking completely generally, not even just about Go, I don't think it's ever right to discourage someone from asking a question because they aren't advanced enough in the field to make use of the answer.

kokiri - seconded, just 'cos something is hard doesn't make it not worth doing.

ilan: Though I agree with Alex in principle, I can't quite disagree with Konrad. In particular, I have run across the KGS French Fuseki lectures and they kind of seem ridiculous to me. Basically, they are analysis of low approach to 3-4 joseki choices along the lines of The Great Joseki Debates, which is fine, except that the audience almost completely consists of 15-25K's. My feeling is that the real point of these lectures is for the 1D player who is giving them to have a better understanding of the subject. For example, I don't think that things such as "the interesting side" have too much bearing on Kyu games. Personally, I never use the low approach to 3-4, so I don't even know the josekis involved. Anyway, there is no harm done, I guess it's no different from having grade school children memorise poetry.

Dieter: If sides there are, I'm on Konrad's. True, it's a fine line between outlining a desirable learning path, based on experience, and patronizing. When someone asks for a broad answer, such as Steve did here, I think it is not bad to have an experienced player differentiate between the questions that really matter at the level of the asker, and those that are difficult to answer even by high level players.

There are too many people who learn sequences by heart that are two points better than the variation, with the same effort as studying techniques that would lift them several levels instantly. 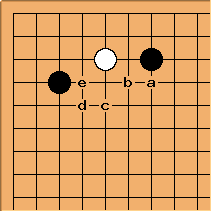 Velobici: I'll defer to Yang Yilun who wrote Whole Board Thinking in Joseki and who places significant emphasis in lessons to 10k players on being able to determine which areas of the board are large, whether to approach low or high, and what general form of joseki to choose.

The first five problems in Whole Board Thinking in Joseki consists of these five choices for white. In each problem, the arrangement of white and black stones on the rest of the board differs. From memory in no case are there more than 12 stones total on the board.

Direction of Play is even harder, even for high dan amateurs, yet Yang Yilun seeks to have 10k students learn what moves are urgent, when a side is developable, when a side is big, to find tennouzan (he does not use that term), to time 3-3 point invasions correctly (or at least better). If any of you have not taken a lesson from him, let me strongly encourage you. He did wonders in taking my 10k son to 3d AGA.

Alas, kyu level games are decided by the last big mistake. Whoever makes it loses. We must strive to make our mistakes smaller in all phases of the game.

unkx80: I suppose all of you had that experience of giving introductory lessons, and then your student asks, "where do you make your first moves?" Of course, that is too early to teach about the opening. But I find Konrad's suggestion a bit too extreme too. I think low kyu players can already start to learn about properties of josekis, whole board direction, etc. But before that, I would think that it is more important to get a good grasp of the fundermentals, such as life and death and middlegame techniques.

Bill: As I think people know, I think that it's never too early in your go career to play the whole board. The fuseki is very important.

That having been said, I think that Konrad is right in this particular case. The choice of kakari, or even whether to kakari, is a fine point. For kyu players learning the game, it is probably a good idea to try out several ideas and see how they work out.

Calvin: I cannot speak for the limit at which this knowledge starts to become important (5d seems high) but I am forced to agree with Konrad in principle from my own experience. It quite painfully clear to me from my study of pro games (hundreds) and fuseki that the suggestions on this page are amateur suggestions, and yet I am 12k. It's not that my knowledge is useless, it's just it will be a very long time before I'm strong enough in other areas for it to become the decisive factor in a significant number of games. Until then, I realize this is just entertainment. It should be mentioned, though, that some teachers are reluctant to get too deep into reviewing the middle game if you've totally messed up the fuseki, because the question of "what's the best play in this losing position?" is tantamount to asking "what's the best overplay to get back in the game?" and is not interesting to them and is perhaps considered not important for the student, either. It does not matter to them that it's a kyu game and your opponent could still make mistakes big enough for you to recover.

Bill: Actually, I think that the suggestions are not the result of amateur thinking, but are based upon the thinking of Go Seigen, who arguably understands go like nobody else for at least 100 years. 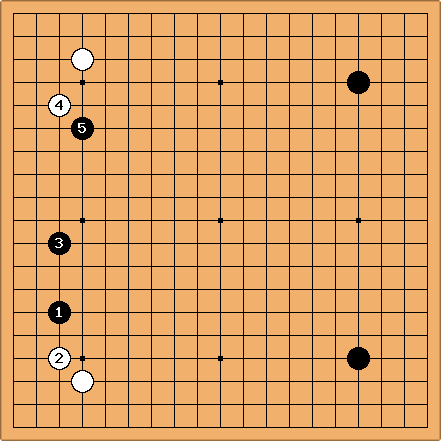 In 21st Century Go, vol. 9 Go Seigen mentions this continuation. He does not say that

is best (or any other play), but he does say that it is the easiest for Black to understand. (Elsewhere he says that that's a good thing, in general.) He says that allowing White a shimari with

looks unsatisfactory for Black, but he thinks otherwise. Black can be satsified with

Alex: Re: Calvin's statement "It's just it will be a very long time before I'm strong enough in other areas for it to become the decisive factor in a significant number of games." I think this is the crucial point. I disagree with this. It's true that most kyu games seem to be decided mostly by the vicissitudes of the middle game, but to most people, the same appears to be true of professional games.

It's easy to underestimate (or miss entirely) the importance of fuseki, because a modest advantage therein will never guarantee a win at any level (though the magnitude that constitutes "modest" varies with the skill of the players). Nonetheless, I do believe a good or bad fuseki has a statistical effect on the rest of the game at any level.

Sure, most kyu games are won or lost on the basis of who captures the largest group, but I think fuseki has a significant effect on one's chances of being that player - the player with the better fuseki will either have better territory and the option of compromising instead of engaging in unfavourable fights, or else have better thickness and the advantage in the fighting.