This page (by Malcolm) presents a family of variations of go. To start off, suppose we base our rule set on french rules (or AGA Rules - they're equivalent).

The basic idea: one player gets a superpower, the other gets komi. A preliminary phase of komi bidding fixes the komi and decides which player gets what. First of all, here are some super-powers:

To give both players equal chances, we use a system of bidding for komi. Say Black has the super-power. Then White's komi should compensate his playing second, and his not having the superpower. Bidding is used to fix the komi and to decide who gets which colour. Bidding goes as follows:

Karl Knechtel: Why not just do a silent auction instead?

Malcolm: I just used the first fair system I thought of. However, I don't know what you mean by a silent auction. Could you describe it?

Both players separately write a komi offer for the superpower. The highest bidder takes the superpower, and gives that written komi to the opponent.

Malcolm One can use a silent auction instead. A matter of taste, perhaps. I do still prefer the auction system described above. It has more interaction between the players. It is slower though, I admit.

This is another (sub-)family of variants. The idea is to weaken the superpower. First, fix a number N.

When Black uses her superpower, White can declare "Sorry, no superpower for you!". This prevents Black from using the superpower for the present turn and all subsequent turns. However, it costs White N points to do this.

Why choose these variants?

Well, I think this idea is not only amusing but also could give some insights on normal go. In fact normal go can resemble superpower go.

The avalanche joseki has some variations leading to a double ko, which one player can use as an endless supply of ko threats. This is like superpower go with the Komaster superpower weakened with N around 30. 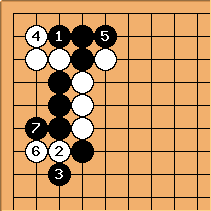 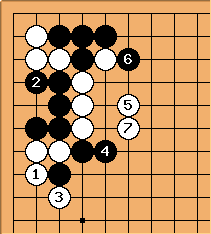 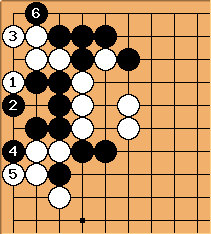 There is a game[3] between japanese pros where they get to an unusual position after some early fighting. One of them, say White, had captured a large group making a territory of about 40 points. Now the position was such that Black could at any moment start a ko that White absolutely could not afford to lose (the loss not only made the Black group live, but killed surrounding White stones). Also, it was impossible for White to remove this threat or aji. Effectively, Black could at the time of her choosing play twice in a row. So the game was like "play twice" superpower go.

If you have any ideas for other superpowers, please put them here.

You may also try the superpower whereby all Black plays are domino stones (no singles) and all White plays are single stones. This isn't as much of a handicap as you might think. Although Black can surround territory much more quickly, White has a much easier time living, killing, and generally winning in situations that look like seki or ko. Any single eye gives life to White stones, except that a 1x2 space is unsettled if all outside liberties are filled.

WRT "superstones", see also TaoGo. Malcolm: Being able to play a Tao stone would be a useful superpower for saving one-eyed groups.

Cyberoro allows for some kind of superpower go

It would be interesting to see the komis used by computers for superpower go on small boards. Computers are already around 1D amateur level on 9x9 gobans, from what I hear (for instance, Mogo sounds promising) and will surely improve. It might be difficult to implement the bidding for komi however, and also programming the variant rules.

Also, I would be very interested to see what komi pro players bid for with "Play twice" and "Komaster" superpower go.

hk For a "simple" UCT program, it should not be all that hard to change it to play a Go variant instead. They use playouts to evaluate a position, so they would easily adapt to variations - perhaps even faster than humans adapt to them (if the variations are weird enough!) I have toyed with the idea of getting the EGO library to play Gonnect.

However, all the better UCT programs use heuristics and/or patterns to make good initial guesses about which playouts to try. Adapting these to a variant will probably take quite a bit more effort.

[1] Forced takeback Go gives this superpower to both players.

[2] Other similar superpowers would be: fix a number N. The superpower lets you play twice in a row N times during the game. Another idea: play 3 times in a row, N times in a row...

[3] I saw the game in an old British Go Journal, with comments by Matthew MacFadyen 6D. Here it is on its own page: The Value Of Two Moves In A Row, BGJ number 90, 1993. Actually it was White who got to play two moves in a row; Black won the game. Okumura Yasushi vs Omori Yasushi, final of the Shodan section of the 1987 Kisei.

tderz: How many 'takebacks' in a game? I played that variant once against Manfred Wimmer (2p) in a pub game. 5 takebacks are worth more than 9 stones handicap, as you can play the wildest variants including mormally-not-working ladders.
Imagine such a ladder only twice over the board and wich influence it radiates ....
This variant is quite one-sided if the komi is not set very high.

Karl Knechtel: Sounds to me like whoever was taking the komi was not prepared for the full implications of the superpower. The ladder shouldn't form, of course. On the other hand, the threat is stronger than the execution... o_O

Malcolm: SP1 is unlimited 'takebacks'. Yes, I agree White would need an enormous komi to compensate. One could weaken SP1 by only allowing N 'takebacks'.