Another variant by KarlKnechtel.

We add to the game a special stone, the Tao stone. It might be marked with a yin-yang symbol, which symbolizes its effect quite nicely I should think. On SL, we can use a squared empty point to denote a Tao stone.

A Tao stone acts basically as an eye for each group it touches. However, it can also be used as part of a wall by either player. To clarify:

In the course of gameplay, treat a point covered with a Tao stone as if it were an empty point, except that neither player may play there unless s/he would capture by doing so. Such a capture results in the Tao stone being replaced with a normal stone. Thus, a group touching two Tao stones isn't necessarily alive as a result, if either stone could be removed by capturing something *else*. This means, for example, that there are situations where you could suicide what should be a living group by playing a dame: 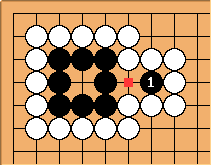 Of course, this makes analysis of life and death that much trickier. ;)

At the end of the game, treat any remaining Tao stones on the board as if those points did not exist, like edges of the board; thus, they may form part of a wall around territory, and do not themselves count as territory.

Now we just need rules for how and when Tao stones can be placed. I propose:

Other possibilities are to give a set number of Tao stones to each player at the start, or have different (even variable over the course of the game - maybe some kind of bidding system?) "costs" for the Tao stones. Perhaps not requiring the player to have prisoners to "purchase" the stone with, but just deducting the points from score.