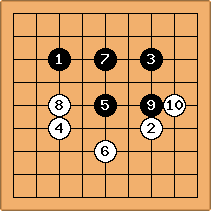 - good - the first who breaks the symmetry loses! :o)
(To be honest - I did this move because it gives me a nice 締まり (shimari) on each of the two corners at once. It does catch two birds with one 石. Not sure, however, if this is as good as the usual combination between attack and defense.)

I didn' intend to keep it synmetric, but it happened to be.

It's still synmetry if you ignore the color. : )

I guess I am losing. This formation (I'd call it "big dipper") is very strong. Did you secretly practice? 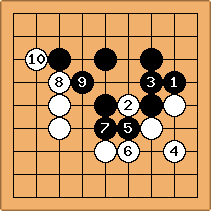 I sometimes played with GNU GO, but I cannot beat the weakest level : (

Well, maybe you can beat me ;-P

Not sure about that.

I don't think I know enough hamete to beat you!

Now it's my turn to attack.

That was 利かし (a forcing move)!

I didn't know the word. Thanks!

Preventing good shape for you (a table), but you still can make a lion's mouth, another good shape. I'm not suggesting that you should, though. >:-]

I am not sure this is it, but I guess this is a bit defensive move.

Yes, this is it, and you're right, it is slow. Luckily for me, it has a weakness if one edge is not really an edge but a single stone - same as my group in the Southeast, btw. There's a good follow-up. 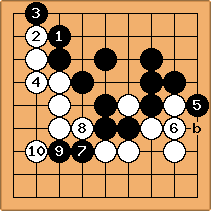 It may look passive, but I thought it's the best way to defend.

It is the best move, but it is not passive. If you had gone on

instead and your stone would have been lost.

I think there is not much other choices for this corner.

Chances of cutting through 'a' don't seem a lot to me. I have to try another way.

You're right. I was just too anxious. I feel tempted to play for a ko at b, but there's too much at stake for me.

It probably has little hope to survive, but I want to give it a chance. Otherwise, I would lose the game anyway. : )

Let's see! This can get disatrous for me. Not sure if

is of any help. 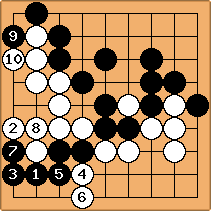 I got to continue to be aggressive.

That goes to show how cruel the world is. I'm only very peacefully defending my territory.

Good - that allows me to be aggressively defensive! :-P

Well, some consider Calling Out Atari a bad habit

One last reckless move (or denial of defeat : ).

This is not so reckless - it is a ko for you, and you have more ko threats. 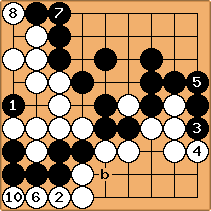 OK. Now I may look like a suicide bomber.

I still have to reply.

Well. That's pretty much it. Just a few more clean-ups.

I would have loved to use this as a ko threat, but this is too dangerous for me.

Not an exciting move...

I could make some exciting ones by taking away liberties of my own group, but I rather play it safe.

Really? You have so many ko threats! But this gives me time to get out of my damezumari. On second thought, this may have been stupid because it reduced my own territory.
Oh, by the way - are we playing with Japanese or Chinese counting? I think it makes a difference for counting this ko. 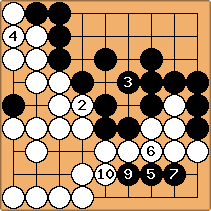 (Black) I did not see any that I could threaten you. I don't know much about counting. So either Chinese or Japanese is fine.

You could have threatened at b in the previous diagram. Now there's only a (now

) remaining. But of course I would respond, since the ko is only worth 1/2 a point. So now I play my threat first, which regains the point I lost with move 50. And, BTW, アテ! [1]

Hmmm. But, if I had placed at b, I would have lost the stone. Would it be worth? Anyway, I have to respond your threat now.

I think I probably will not gain from this, but there is a chance. So I put here.

Nothing gained, nothing lost. It would have been a great ko threat, though.

OK. I will exhaust all of my chances.
(

OK, can you copy the board, this time? 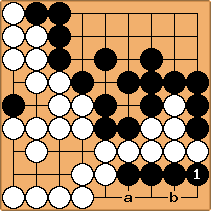 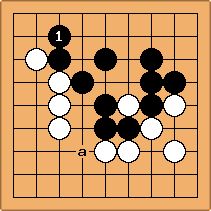 DosGatos: I think Black should have played at 'a' for move 21. What do you think? 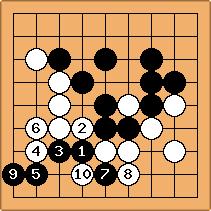 unkx80: Locally Black cannot live. I feel that this topic deserves a separate page of its own. 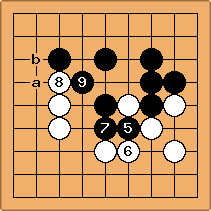 May outsiders comment? --BlueWyvern
Sure, Go ahead. --DosGatos
Yes, please do. I'm sure as a 1k you can give much better comments than me and I'm looking forward to learning from you. -- Sebastian

[1] Does this come from アッテンシュン?
Do you mean Japanese pronunciation of "attention"? To me 'アテ' sounds like coming from a Japanese word 'ateru' which means 'to put'.