It depends. Method a leaves no ko threat for White to exploit later; b has good potential for making eyes, if necessary; c might be good depending on the surrounding situation, but looks a little odd in isolation; d extends the group further, but later in the game you may need another stone to protect against a double atari.

Most of the time I vote for b (or a, if I'm wary of ko); but d is often good too, as long as you don't let White set up a double atari.

Which is the best way to stop the cut? (b and d copied from above)

The whole question makes more sense if there are the circled white stones preparing for the cut. Otherwise also e and f are even preferable shape options (certainly over a or c; see also a. g, h, i below). Option e can capture a cutting stone c with Black g (for geta) if one of the circled stones was not present.
Forget about a and c above: even fear of imaginable future ko fights cannot justify such immediate local losses (already a small number of them add up to a bigger value than many kos).
If c (in the first diagram) is peeped and answered, the a-shape's empty triangle has been filled to make the perfect dango.

Option b (in the diagram immediately above) has the big disadvantage of not making eye shape (just when you might need it). The squared white stone can create a false eye.

Why not also option f? In the middle of the board it radiates influence and a cutting stone is captured in geta with x to z.
f's disadvantage is that it can be attacked by White x and z or y.

The plays in d and f are both good general purpose moves (and much better than a or c); also b is often quite suitable (if eyes are not important). If I had to chose only one candidate, for a general rule of thumb, then d fits best (even over f) without any if's: it protects the cut and creates eye shape. Because these situations occur so often in games, even the smallest difference in efficiency adds up hugely in the result. 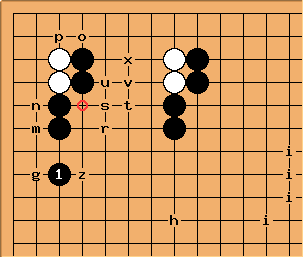 Global sente must not be forgotten as an option over honte moves.

Does 1 in option g work? Which stones are important? What does 1 threaten elsewhere? Could I play Black m and o in sente against a white n if this were a corner? If I play o, do I then create a loose-ladder option r up to v (or r-x?) against a cutting stone (note, it depends where the edge in this diagram is)?
These are questions which are not so far of from the fundamental, underlying question: must the stones be 100% connected? Are they all that important, compared with sente? The tenuki option is h. Could I fight, if cut? Could I rely on a ladder? That implies some ladder breaker options i?.

I found this shape issue of such fundamental value, that I had to comment on the typical bad shape examples a and c.