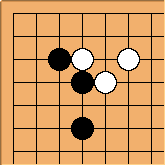 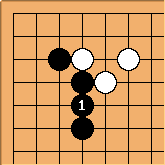 HolIgor: They say that this is a good shape. I think that this little bit of knowledge helped me to get from IGS 5k to IGS 4k.

Bill Spight: Who are "they"? Yes, this is joseki. But! 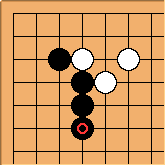 With the other stones on the board, should Black play the marked stone? 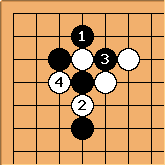 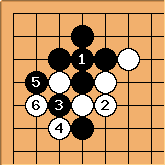 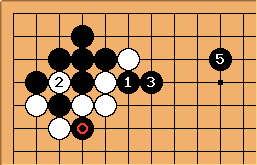 By the way, the connection is called bo-tsugi (staff connection). Here is a nice example from the same starting position.

Here is a nice example from the same original position (Small Joseki Dictionary, by Suzuki and Kitani): 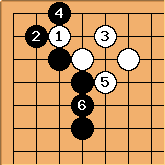 Black 6 is better, here, because White has already played at 3.

JamesA: Doesn't which of these joseki is better depend completely on the surrounding position? In one, White gets influence along the top, in the other she gets influence down the side. Also, in the second joseki, White is thicker and has damaged the marked black stone.

Bill: Well, maybe not completely. :-)
Yes, which joseki you choose, or whether you play joseki at all, depends on the surrounding position. When you play the whole board, you may willingly accept slight local inefficiencies. :-)
So if you make the staff connection in the Good diagram, you should be aware that locally it's a little too solid.

HolIgor: Maybe, this seems to be a little bit naive, but the move was not obvious for me. Bill, you say that you studied shape a lot. But how? There seems to be so little published on it and a new bit of knowledge on the topic comes very rarely.

Bill: When I was about 4-kyu I bought Secrets of Shape and Tesuji by Maeda Nobuaki and Takahashi Shigeyuki. It really was an eye-opener. They went into this joseki in detail. :-) I gather that there is little written about shape in English. That's too bad. I no longer have the book. If I did, it might be worthwhile to translate it. I'm sure that there are good books on shape in print. 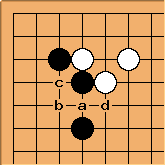 jesusin: When looking at the starting position I would consider playing a b or c and then I would invariably play b. I feel this way the corner is better protected. Why is it worse than a? The play b exerts a similar influence towards the center and the bottom, doesn't it? And what if this shape is not placed in the corner but in the middle of the board, is there any difference?

jesusin: I will try to answer myself: if White plays in the future at d, then Black is better off with a. And the cut at c is equally protected by a or with b.

HolIgor: That's how it is with shape. First you don't know which is the best of several moves that seem about equal. Then you're told what the correct shape is. You start to pay attention in the pro games. It turns out that they play correctly. Then you apply the move in your games and see that you've got good results. And finally it just becomes natural.