The throwing star shape[1] is formed by four knight's moves. It is a strong shape, much like a ponnuki, and is also flexible. Since it takes four moves in a limited area to build, it is also quite slow, however.

JohnF I rather like like this term, and may well use it (though perhaps by its ninja name, shuriken) but in the interests of compatibility we need to mention that it's called a pinwheel (a child's windmill toy; kazaguruma) in Japanese and dates from Mew Fuseki days, and the term is also used in Japan for a different shape when teaching children. One other usage of shuriken in Japanese go is for a contact play that seems to come out of nowhere (e.g. in the open-board position White c3 and d6 and Black g3, a Black play at d7 is a shuriken. This term may gain even more traction in Japan with the current AI style. As per the usual difference between Japanese terms and western terms, they are focusing on the dynamic function, westerners on the static shape. 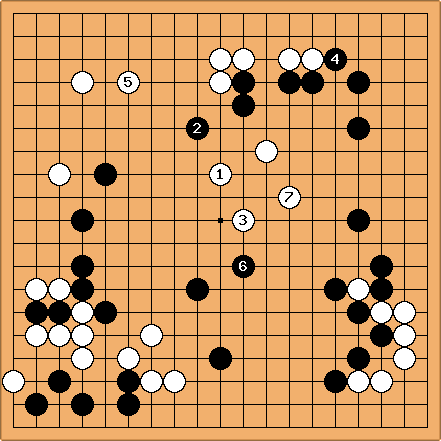 In this 1992 game, Kim Su-chang uses the throwing star shape to counter the overwhelming influence that Takemiya has built up in the center. 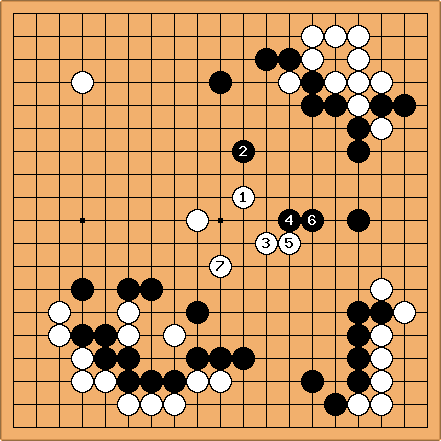 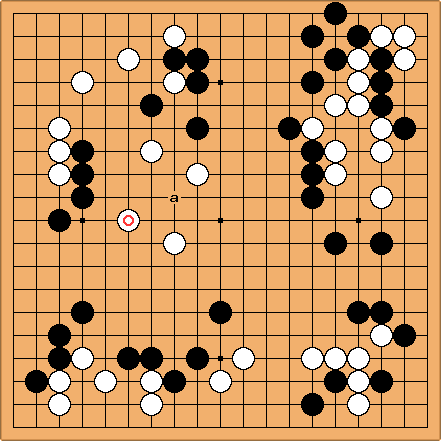 This shape is similar to the throwing star but has 2 large knight's moves and 2 small ones. Cho Chikun, famed for his shinogi skills, uses it to make shape inside Yoo Chang Hyuk's moyo. Yoo, one of the worlds strongest attackers, immediately attacks the shape at a. This game is from the 3rd Fujitsu cup in 1990 and is covered in detail in Master Play The Territorial Styles of Kitani Minoru and Cho Chikun. 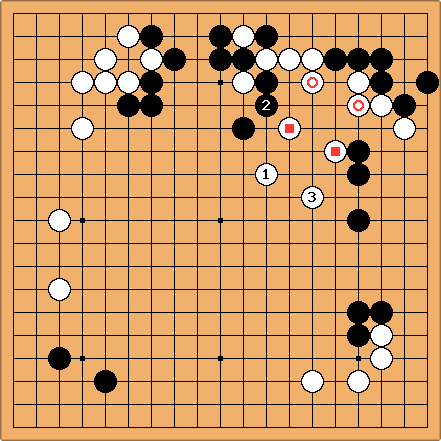 Uberdude I once made 2 throwing star shapes in the same game next to each other! I'm not claiming they were the best moves, but I thought they were an elegant way to make shape for my group. (1+3+squares is one, squares+circles is other.) I uploaded the game to EGD:

[1] This term is not found in literature, but was coined at Sensei's Library, by Herman Hiddema