This is a shape that came up during a game I was playing (poorly) and won.

My opponent resigned, and then asked to play out the game anyway. The Score Randomizer during the review indicated B+3.5, and I didn't pay much attention to it. I figured I had lost and was lucky that my opponent only resigned because of a failed invasion.

Later, after reviewing the game, I checked the Score Randomizer again and it considered this corner dead. Which was contrary to my initial reading. 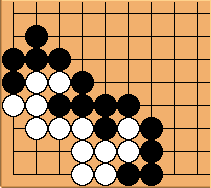 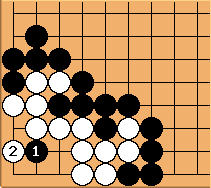 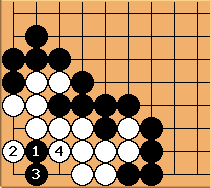 This leads to the position in Seki with false eye scoring rules. Any different response looks worse for W. Note that W next at 1-1 starts an infinite cycle of "W 1-1, B take, W take, B pass". -- ChrisBall. 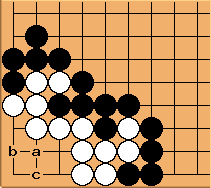 pillbox: Looks like W can block at a, b, or c to force life. 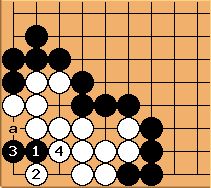 LukeNine45: With two outside liberties, white can play a and is alive. With only one,

and it is a gote seki for black. (Later: The rest of this paragraph is completely wrong:) Note that this

is better than the one in the above diagrams, because here white can omit

. Above, if white does so, black can make a ko.

in the "improved" line (unless there are two outside liberties, in which case White can play oshitsubushi)... 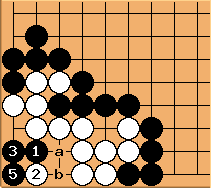 A Black capture at b would either leave a dead bulky five inside, or allow Black to capture by me ari me nashi, and White at b is dead in gote, so White must play a, and Black takes first in the resulting ko.

LukeNine45: Yes, I don't know what I was thinking.