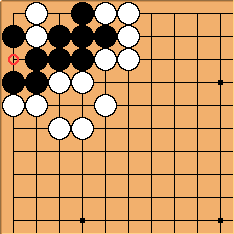 Under Japanese rules its a seki. See Example of a seki with 1 (false) eye in total.

Under Chinese rules and Ing rules it is also seki, but unlike under Japanese rules Black receives one point for the empty circled intersection in addition to the points received for Black stones on the board at the end of the game.

Anonymous: Under AGA rules, which are more or less equivalent to Chinese rules, black can secure a point out of this position by playing the circled point as the last move (after filling all dame). This is because passing costs a point, and by waiting until the very end black can force white to pass an additional time. Either black fills the last dame and the sequence is wPass,fill,wPass,bPass,wPass, or white fills the last dame and the sequence is fill, wPass, bPass,wPass, either way Black makes one more point than passing immediately.

Herman: This is not true, by filling the false eye Black will kill his own group. Positions do exist where filling false eyes in seki is a way to get points for them under AGA rules, but this is not one of them.

Anon2? Don't the AGA rules count territory in seki? You don't have to jump through hoops to get eyes in seki counted.