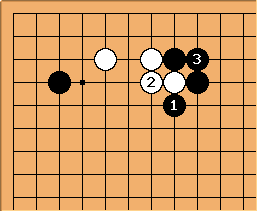 in this joseki position were played by Shinomiya Yonezo against Jowa in 1821, 31 January

Atari-then-connect may be 'natural' for many players; but in this case simply connecting at

exchange is the joseki. You can see this as application of conventional wisdom about the staircase, and the 123 principle. 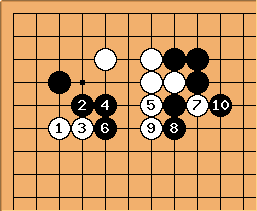 White goes on the attack, with

which are like a slow-motion driving tesuji.[1] Then adding 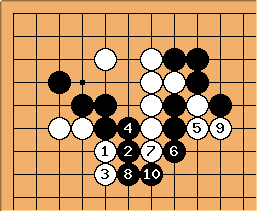 is another inducing move, adding purpose to

White successfully went after Black on the top side.

Though he eventually lost this two-stone game, this sequence gives an idea of Jowa's power.

[1] Without the atari, White has to be more circumspect. 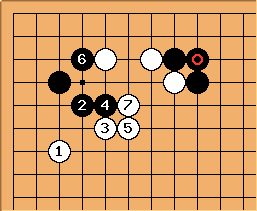 , this joseki from the nineteenth century shows White having to concentrate on making sensible shape.

Isn't playing atari in cases like this generally considered bad style? Black is forcing White to play at a point that would otherwise be a cutting point, thus Black's atari is a thank you move. -- Andre Engels

Yes; there is probably a rule like 'only play atari then connect when both stones are essential', just because atari will so often be aji keshi. -- Charles