DaveSigaty: I thought this was a very interesting point in the game. When White played elsewhere in the actual game we moved immediately to the large yose stage. Connecting at 152 below instead leaves the situation on the right still unsettled. What happens here? 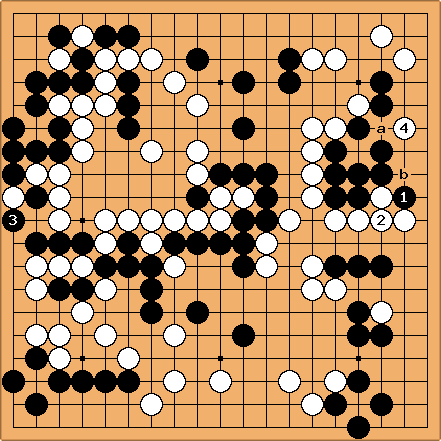 White connects and Black takes the big point on the left, treating 1 as a forcing move. I think that White 4 is the natural play. 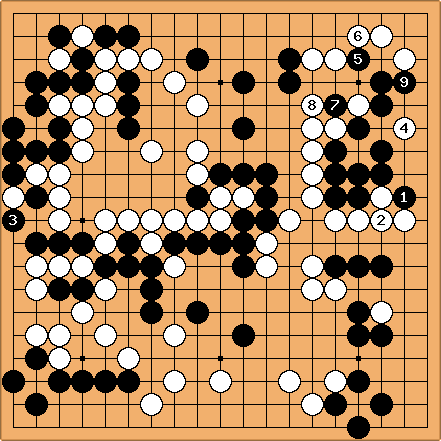 HolIgor: When taking the big decision I considered this variation and thought that White forced Black to take too many points. And here Nonny's question comes.

Dieter: I think - without calculating much - that Black a makes miai of capturing White 4 and making an eye at b. 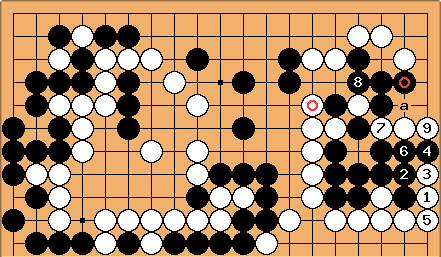 unkx80: This is a 2 am post, and a continuation from the previous diagram. Did I read wrongly?

DaveSigaty: There is definitely bad aji left here for Black. See JamesA's alternatives further down the page. The

stone would be better off at a, reducing the white stone's liberties. 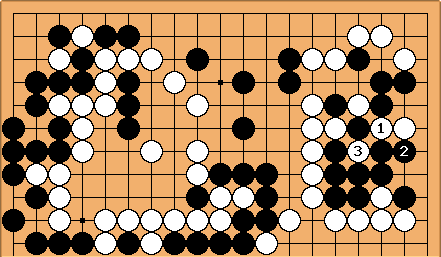 in the previous diagram.) 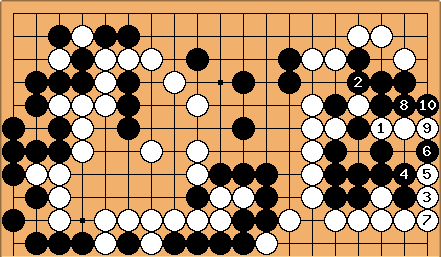 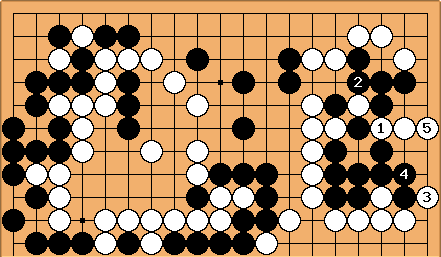 Bill: Thanks. I overlooked

above looks like a mistake. Better the descent, threatening to connect either way. 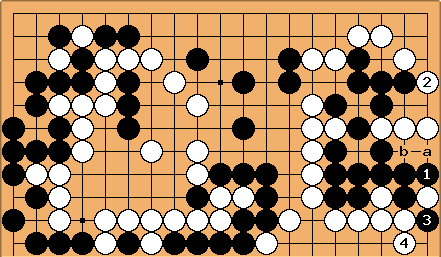 , containing Black.
Instead of 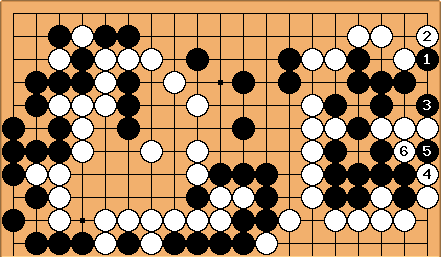 secures the corner, I believe. Because of Black's shortage of liberties, the oiotoshi of 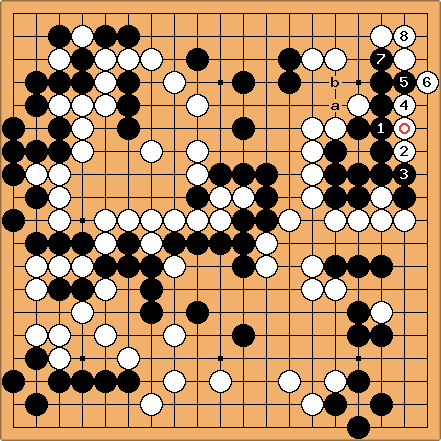 Dave: Let's see! I think this is one of the main theoretical lines. The questions seems to be whether Black can find something that works after forcing moves to here. I think that a and b are miai for White to prevent both a second eye and a connection to the left. 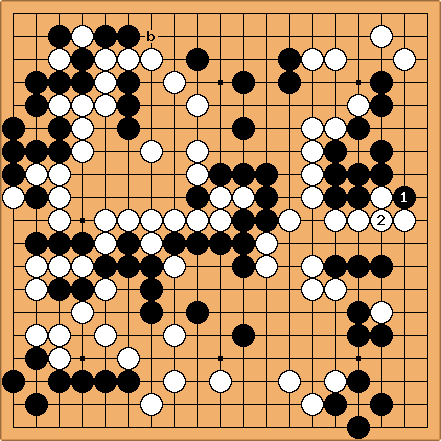 JamesA: How about this for an alternative black play? 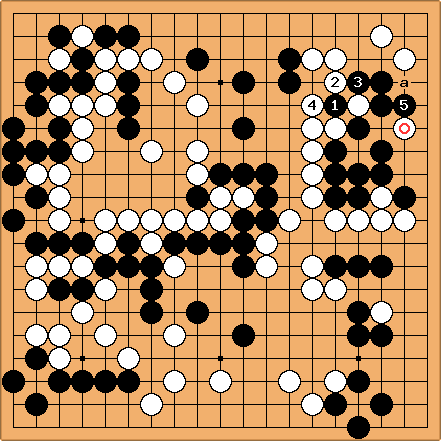 to prevent an eye and cut Black off from the center. I had not looked at

(only a) in deciding to play

. This is better as it reduces the white stone's liberties. At this point Black is alive as far as I can see. 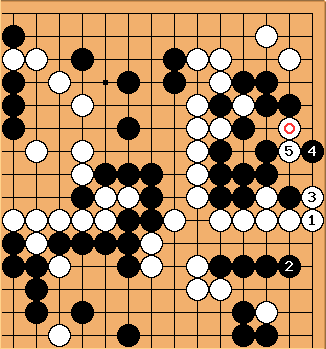 Varous bits of aji remain, however. The most serious is White's descent at

here. If Black does not answer (for example he protects the lower right instead, White kills the black group by forcing a connection to the marked stone. White would like to test Black along the lower right side to see whether the aji is of any use. Black has to be careful in answering on the lower right so as not to give White an opportunity to use 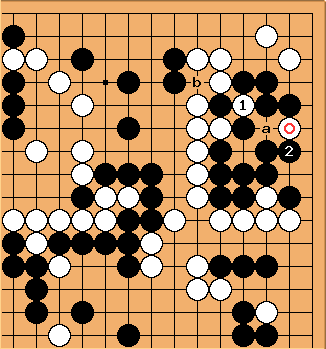 If the play on the lower right side proceeds in such a way that White does not use the descent to the edge in the previous diagram, White may choose to capture the ko in sente. Black cannot afford to let White cut at a and must answer with

, or some other move. This can be important later because if Black manages to cut the white stones in two at b, both the resulting white strings may have to take time to secure two eyes. 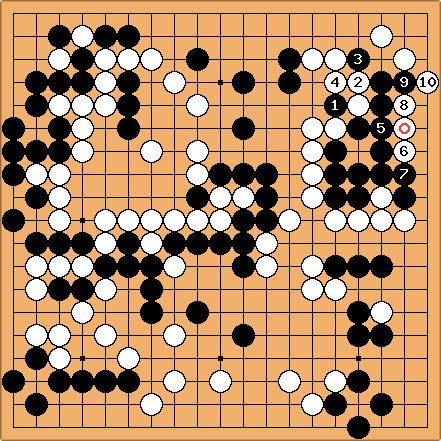 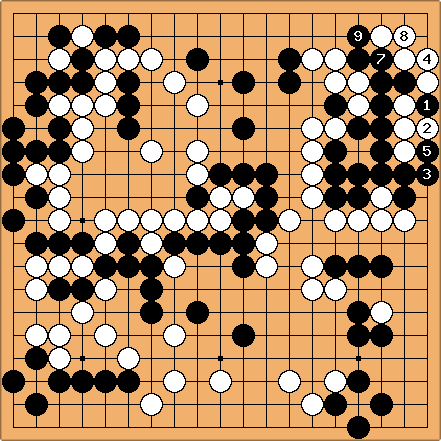 Black seems OK in these variations, but I'd bet money that I've missed something.... 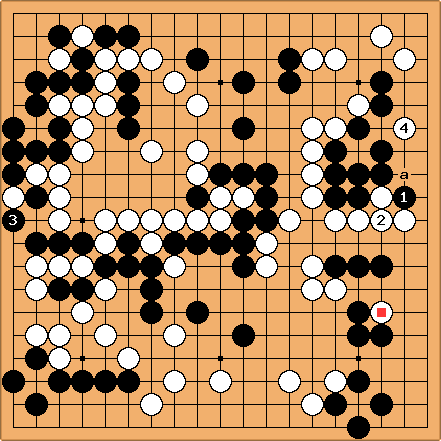 This is just a question: Not that White wants to, but doesn't the solid connection at White 152 mean that White can put the marked stone in motion, threatening to connect directly or underneath? I'm probably missing something, but it seems to me that because of the potential atari by White at a, connection underneath is possible? Please let me know what I'm not considering. --Nonny

dnerra: It seems you are right; I did not see this, and it means that Black 151 may have been a bad move: 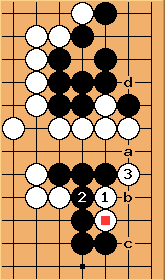 If Black a next, White just connects at b and Black cannot cut. So Black would follow up with c, but this is gote and so White might as well get to play there.

Maybe White would play this sequence after capturing at d with sente.

Dieter: You know what I think ? After having read the whole discussion and considering the truckloads of aji that exist along the right side, I think Nonny was correct all the way when he questioned my move at 135 (see OngoingGame2). I also think his proposal for improvement was correct. Black 135 should have been played at 4 in Variation 1 (top of this page). Gentlemen, I take my hat off to Nonny.

HolIgor: Come on, Dieter. If playing 4 was necessary then, of the two moves, 133 and 134, the latter was larger by far. I think that Dnerra, 4d, eased up a little bit on White to make the game closer.

dnerra: Oops, I think you should show a little more disrespect to my rank, HolIgor! :) (Which is 3d, not 4d, by the way.) So there were three moves of mine that got particularly criticized. 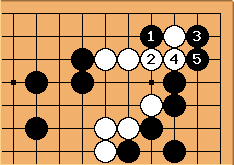 But,to stress that point with the disrespect a little, I would say that I usually commit at least two blunders around this stage of every game that are worse than the mistakes listed here. If you don't believe me I will try to record them in one of my next tournaments and present them here on SL. :-)