Quite often when choosing joseki all three possibilities exist. You can take the corner. You can give up the corner and get thickness. Or you can have a bunch of weak groups running in all directions.

The purpose of this page is to discuss or develop rules that would help to choose among the alternatives.

An example from my one of my recent games. 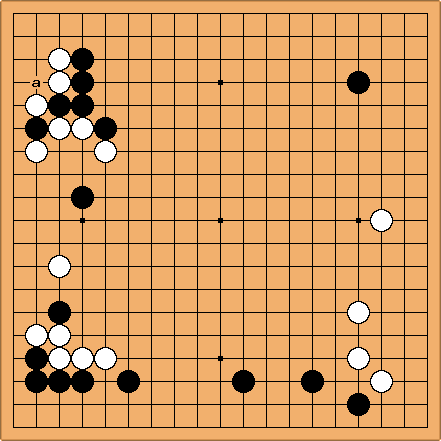 My opponent played a. I think this was a wrong decision.

Billaben (9kyu KGS) I completely agree with Holligar. For black to play a in this example is a mistake. Allow me to explain why. 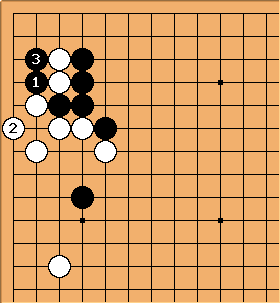 This is an example of black playing a. This play takes the corner from white in gote. the profit here is about 10 moku. That is not enough on this board. Many things on this board are worth much more than 10 moku, and may be sente as well. -- Billaben (9kyu KGS) 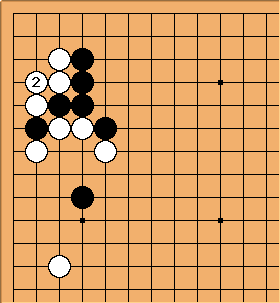 Here is another diagram, of white playing a instead. This point to white represents about six moku in gote. again, this play is simply too small to play at this stage in the game. White should play elsewhere for large points. -- Billaben (9kyu KGS) 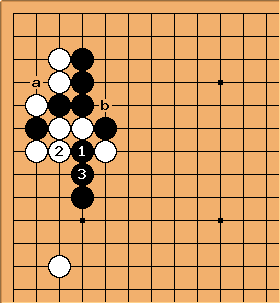 I cannot say exactly what black should do instead of defending at a. I can only put out a few ideas.

Here is one idea. Here black aims to make life difficult for white on the left side but cutting him off from the center. Black should pay close attention to a and b.

If white takes a then black should immediatelly protect b. If white attacks at b black should defend and if necessary play a to take the corner in gote.

This sequence is aggressive with good potential to be profitable for black. -- Billaben (9kyu KGS) 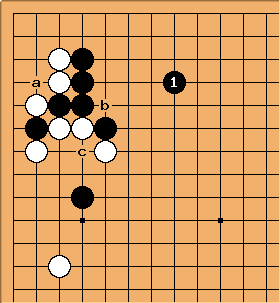 This is the other direction I would consider for black. Black has thickness on the top side making it very natural to extend here and build a strong moyo.

The marked points a and b are important points for both white and black. For black defending b is very important. If white takes a black is now forced to defend b. If white attacks b directly black can keep a as a solution to find life if black cannot quickly resolve the cut. -- Billaben (9kyu KGS)

I have frustratingly little understanding of how thickness is properly used, but isn't black 1 there violating the principle of not using thickness to make territory? -- Gresil (19 kyu KGS)

Alex: Well, sort of. Actually, the problem with

here is that Black isn't actually thick yet. To be thick, he either needs to capture the corner or cut at c and capture the stone on the outside. As it stands, if Black plays tenuki and White takes the corner, Black's stones are weak, not thick.

However, if Black had already captured the corner or the outside, then yes, you are correct. Black would be playing too close to his thickness.

I'd also like to say that Billaben's estimates of six and ten points in gote are way off on the low side; the corner is much bigger than that. Still not as big as the outside, though. 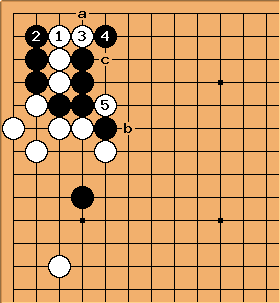 Black must play at 'a' (or one space to the left); an extension to 'b' would give white 'c' and a huge corner. When he plays here, white takes with 'b' and has a thick group which points centrewards, works beautifully with the lower left thickness and the isolated blacks, which limits black's development on the upper side.

and takes the corner back. If black were willing to concede the corner he should do so this way rather than as above. This is precisely the sort of thing that the two 'captured' stones' aji should achieve - black's mistake would make my day. 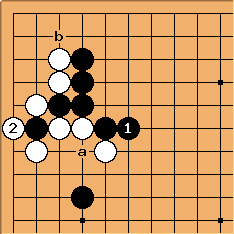 My initial instinct as black, rather than the initial cut, would be to play a simple extension. This threatens a cut at 'a', or a very large moyo on the upper side; and there is still lots of choice in sente for the corner: the original cut can be made, if needs be, or 'b' would be big. Any higher-ranked comments on best play? 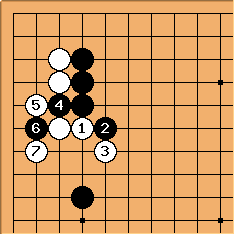 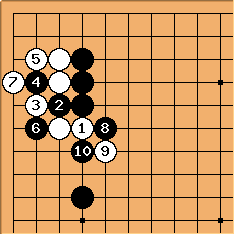